Millions of people swarming like flies round waterloo underground.... 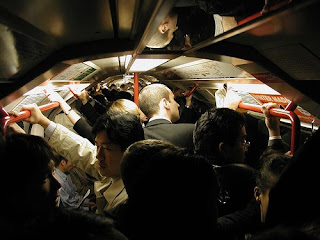 I was in London today, and I really don't know how you people do it. The architecture's alright: St Pancras has improved out of site, of course, and - the monstrous carbuncles around the National Theatre aside - the South Bank is quite pleasant too. Nottingham's not much to look at, truth be told, so a change of scenery is no bad thing. But how on Earth do you cope with all the people? It wasn't even rush hour by the time I arrived, and it's not really all that hot at the moment, but the underground from King's Cross to Waterloo, via Green Park, was horrible: it's dirty, smelly, hot, cramped..... and generally really quite unpleasant. I was certainly very pleased to finally surface into the fresh(-ish) air from a seemingly impenetrable labyrinth of subterranean corridors and endless escalators.

Going home was even worse. We were travelling at the very edge of the evening rush hour, crowds weren't yet really thick, but already people were travelling in that protective bubble that Londoners seem to acquire. Is it acquired, or is it something you have to be born with? That trance-like cocoon that envelops people and protects them from the heat, the dirt and most of all from the crowds. Some people use their books or their newspapers as shields; other people use their iPods; others just stare blankly into space. Everyone seems to avoid eye contact. For an out-of-towner like me, it's like travelling with zombies. Certainly a far cry from the four old dears who joined a nearly deserted train at Leicester on the way down. There were no reservation tickets on the backs of any of the seats, and the carriage was pretty much empty, but they insisted - politely, but they insisted nonetheless - that the people sat at their table moved so that they could sit in their rightfully allocated seats. I'm not sure how they would cope on a tube, to be honest. I doubt that even the full fury of four righteous old ladies would be powerful enough to get past the forcefields on display on the Underground. They'd likely have to stand pressed up against the doors like the rest of us.

Do I sound enough like a provincial ingenue yet? A greenhorn from the sticks with a hayseed hanging from my lips and a corn pipe?