where did your long hair go? 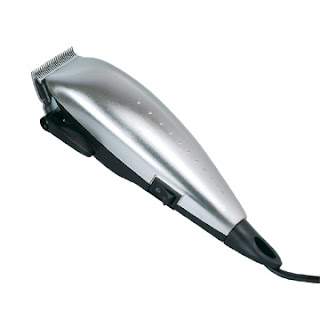 You might not believe it, given the state of my hairline, but I sometimes need a haircut. In fact, my hair - the bits that aren't falling out, anyway - is incredibly thick and wiry. I don't have anything fancy done, like, but I do need to have my hair cut every four weeks or so. If I don't, then it all goes a bit unfathomably frizzy and out of control.

Even though I only ever have the clippers applied all over, and given that I have two pairs of my own hairdresser's clippers kicking about the house, I still usually go to a local barber and fork out £4 for a 2 minute buzz. It's not that I don't trust C. with the job and she's done it many times in the past, it's just that I find the whole process a lot less stressful when done by a professional who doesn't carry about them an air of barely concealed impatience and who doesn't bang on about how my spiky hair cuttings keep getting into their bra. Sometimes I'll even pop into the posh(-er) hairdresser in town and spend £12 on a 10 minute buzz. The haircut that I get there isn't noticeably three times better, but once in a while it's nice to feel a touch pampered by the person wielding the clippers and really taking their time over the job.

I had my haircut this weekend. I wasn't planning to, but I had it cut nonetheless. I came back from my normal Saturday morning run and was aiming for nothing more than a quick trim of the bits around my ears; the first bits that start to look fluffy and out-of-control. A quick trim now, I thought, would save me a trip to the barber for another week or so. I'd charged the lighter pair of clippers up especially. I unplugged them, took them into the bathroom, adjusted the blade so that it was as short as possible against the plastic clip and then started to trim. One quick slash up from my sideburns and across the hair next to my ear. Three seconds. That's all it took. As I pulled the clippers away, I could see that something was horribly wrong. My hair hadn't been long by anybody's standards: I'd had a grade one cut done not three weeks before. Even so, my reflection in the mirror in front of me showed an expanse of skin where the clippers had run. How could this have happened? I stared dumbly at the clipper in my hand. I frowned. I stared a bit closer.

Shit. That little plastic slide that was supposed to cut my hair to a grade one? It wasn't there. It was not on the clippers. I'd just given myself a grade zero on a not insubstantial slice of my hairline. I stared at the damage wrought on the right-hand side of my head, then tilted my head and looked at the other, the untouched side. There was only one thing for it: I turned the clippers back on and tried to recreate my handiwork in the untouched pastures of the hair on the left-hand-side of my head.

Three seconds later, I turned the clippers back off and stared at my refection. The best thing that could be said about the face that stared back at me was that at least it was even - evenly stupid, anyway. I'd made myself look distinctly gonzo.

I picked the clippers back up, cast around desperately for the number one slide, and then set about the remains of my hair in an urgent attempt to undo the damage. Thirty seconds later, the sink was full of clumps of my hair and the front of my head was unevenly clippered. The back, however, was still untouched.

I then sat, clippers in hand, at the bottom of the steps for the next thirty minutes - long, long minutes - as I waited for C. to return from her run. She barely had time to draw breath and to wipe her brow as she stepped through the front door before I pounced on her and begged her to rescue me from my misery and my ruination. I threw myself on her mercy, and in my hour of need, she rescued me. She was both exasperated and entertained by my predicament, but over the course of the next five minutes, she salvaged my ego and what was left of my dignity with those wretched clippers.