Right. It's Tuesday night. Until last week, this was a perfectly normal night of the week. Now though, it's the night when I have to administer my weekly dose of Avonex: the medication that I inject into my thigh muscles in an attempt to slow down the progression of my MS.

It sounds pretty hardcore, I know....but I'm just an ordinary bloke There are thousands of people who have been doing this without fuss for a whole lot longer than my eight days. I'm nothing special and it's nothing that every single one of you wouldn't do yourselves if you had to. As Friedrich Nietzsche said, "that which does not kill us makes us stronger" (or was that Hetfield/Ulrich/Hammett/Trujillo?).

With that in mind, how about we set about a little bit of demystification? 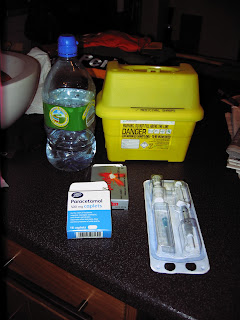 Here's what you need:

-> a bottle of water, ibuprofen and paracetamol: injecting inteferon beta 1a into your body in an attempt to modify the behaviour of your immune system comes with side-effects. Most commonly, these take the form of headaches and flu-like symptoms in the hours immediately following your injection. Some people find these intolerable, and it is usually recommended that you pump yourself full of a cocktail of ibuprofen and paracetamol, inject yourself in the evening and then go to bed to try and sleep through it. It's also thought that drinking lots of water during the day can help minimise the side-effects. Well... it can't hurt, right?

-> some Avonex, a syringe, and a reasonably big needle: I chose to have bioset Avonex, the powdered form of the drug. I chose it for the simple reason that it doesn't need to be kept in the fridge and thus gives me the maximum flexibility. It does, of course, mean that the drug needs to be mixed up before it can be injected. Not an especially big deal, but you do need to make sure that it all dissolves okay and you're not shooting some lumpy powder into your thigh. The needle itself needs to be long enough to deliver the drug directly into the muscle.

-> A sharps box: to hygienically dispose of the used syringe and needle. You can't just chuck it in the bin, can you? This gets collected and incinerated by the same firm that delivers my syringes and stuff. 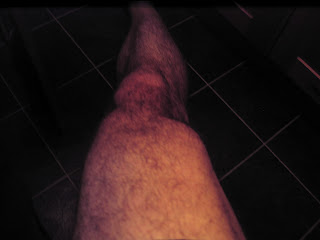 You don't use sterilising swabs or anything - apparently they toughen up the skin - but you should probably go and have a shower before going any further. The 4.23 mile run I did before starting this evening is probably optional though. 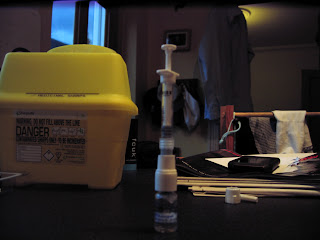 So, you clip the vial with the powder in it onto the syringe. Then you inject the solution in the syringe into the vial and mix it up a little until it's all dissolved. 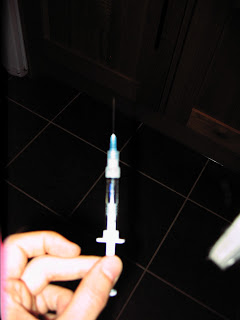 ...then you draw the solution back into the syringe, remove the vial, put on the needle, take care to remove as much air from the syringe as possible.....and we're ready to go. Straighten your leg out to relax the muscle, use one hand to hold the skin tight - about a hand's length down from your hip - and then, with a few inches run-up to make sure you get through the skin..... push the needle into the muscle. 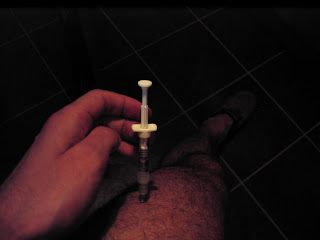 It's a sharp needle, so it sinks in surprisingly easily and is completely painless. Push down the plunger with a slow, steady movement. Then we're done. All that remains is to carefully pull out the needle and chuck the whole lot in the sharps bin.

Nothing to it. And now you know.