I'm training for a half-marathon in September. There's still some way to go, but my weekly mileage is inexorably creeping up. I'm now past the seven mile mark on my longest run, and it will double before too much longer and as we get nearer to the big day.

My training programme last week went something like this:

I'd actually like to squeeze another run in, but as you can see, there literally aren't enough days in the week. On the weeks when there's no football, that's exactly what I do.....

Until my longer run started to get significantly longer (it's up to 75 minutes this week, with some intervals thrown in), I was happily doing other exercise on my "rest" days too, but that's had to stop. I was starting to notice how tired I was; bone tired.....and so somewhat reluctantly, I've had to concede that I need to be more careful about how much I put my body through and how many spoons I might be using up. I was also, it has to be said, becoming more conscious of the wear and tear the increased mileage was placing upon my body.

So, as anyone else would do in the same situation, I bought myself some new Jimmy Choos. 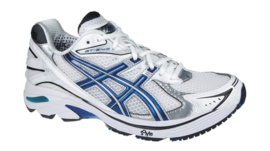 OK, well not Jimmy's exactly. Hardly Manolo Blahnik's either... but do I look like Sarah Jessica Parker to you?

I'm told that you're supposed to change your running shoes something like every 500 miles. It sounds a lot, but if you're doing only ten miles a week - and I'm currently doing nearer 20 - then that means you should be replacing your trainers every year. I'm very heavy on my feet when I run, and I'm a mild overpronator, which means my feet roll inwards from heel to toe as my foot strikes the ground. If I don't wear running shoes with the right kind of support, then this would place enormous strain on my joints and could easily lead to injury. I learned this the hard way by getting shin splints and tendinitis in my knees (to be fair, I was also a lot heavier at the time). Since visiting a specialist running shop, having my foot-strike properly assessed and then buying shoes accordingly, I've not had any problems. So not surprisingly, for the last few years, when I remember to replace my running shoes, I have actually pretty much bought the same trainer each time: from the Asics Gel GT 2100, to the 2130 all the way to my new pair of 2140s. Well, they do boast "IGS, an all new extended Space Trusstic System for greater stability, DuoMax Support System and Solyte Midsole Material". So there. What more could you want from a shoe? Lasers and a tractor beam? (actually, maybe that's what a Space Trusstic System is....?)

It's hardly the most glamorous purchase in the world (especially once you've put in the elasticated triathlon laces I like to use)..... but if it ain't broke..... and I don't really want to be broken, if I can avoid it.

That said, after running in my sparkly new trainers at lunchtime, I still felt bloody knackered. I was hoping they might help me with that, but it turns out that I'm still old and useless, only now I have cleaner looking shoes.
Posted by swisslet at 20:20

Email ThisBlogThis!Share to TwitterShare to FacebookShare to Pinterest
Labels: exercise