forget you're in the world.... 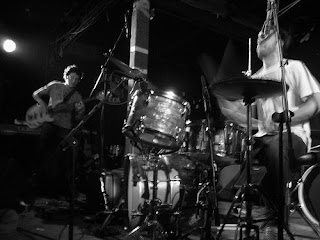 White Denim's first album is a fantastic blast of raw, basic rock music that sounded even better live: wilder and louder. When I saw them last summer, both of the guitarists played facing into the drummer and taking their lead from him as they improvised and jammed their way around their songs, drawing a relatively short album out into a reasonably full set. They were absolutely brilliant. I've only listened to it a couple of times so far, but the band's second album, "Fits", seems to be slightly different: the loose, garage-style rock is still there, but there's also an unexpected folky influence too, with one or two of the tracks sounding oddly like Devendra Banhart. A grower, I think, but not anywhere near as raw and visceral as their first effort.

Live, however, they remain a awesome proposition - apparently they still haven't found a way of bottling that thunder and putting it onto their records. The "Why Don't We Do It In The Road' sound is still there, but it seems to have been augmented now with a touch of heavier, Led Zeppelin type 70s rock influences. What's not to like about that? I bumped into an old colleague of mine on the way in, a lovely chap who must be in his late 40s. He gestured to the stage and asked if I was here to see the next big thing. Um, I was here to see the next big thing twelve months ago, actually. Get with the programme, grandad.

As we entered the venue, I had noticed that the two tickets I had were numbered #2 and #3. Together with the White Denim t-shirt I was wearing that I'd bought at last year's gig, I was a touch worried that I might easily appear to be something of an uber-fan. I needn't have worried: the band also seem to have acquired some fairly hardcore fans in the twelve months. The audience was quite mixed, with a wide range of ages from hoary old rockers to glammed up girls in vest tops. What really caught my eye though was a guy who looked uncannily like Will Ferrell as Tank in "Old School", complete with sleeveless t-shirt and a rather apeish gait. He was accompanied by a number of friends, including one with flowing long hair and a very full beard. They were really into the band, throwing themselves around with gay abandon and sharing manly high fives and chest bumps when the band played a song they particularly liked. At one point, the guy with the beard actually managed, during "IEIEI", to do a spot of crowd surfing, and as he looked a touch grubby, it was very entertaining watching the crowd desperately trying to pass him back to his friends....

The band were brilliant. Last time round, they paused between songs to tell us that they were from Austin, Texas. This time around, they just played for an hour solid, moving fluidly from song to song. The only pause came when the drummer looked out into the crowd with a big grin, and said something like: "We played here last time, and you're still really cool." Why, thank you. You're not so bad yourself. Old stuff and new stuff was blended together pretty seamlessly, and although there were one or two slower numbers, I certainly didn't hear any Devendra Banhart influences in there. They rocked. 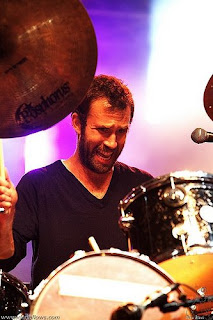 Joshua Block is - for my money anyway - the best drummer in the world. You know how some drummers absolutely surround themselves with drums and gongs and stuff? Well, Block makes do with a tiny kit with the absolute bare minimum of equipment, and he absolutely rules. In fact, perhaps it's one of those unwritten rules that the more drums a drummer has, the less of a drummer he actually is. I know drummers are supposed to provide the heartbeat of a band, but I've never seen one who actually leads before. He's sensational. Both James Petralli on guitar and Steve Terebecki look to Block for their lead on almost every song. Unlike last time, they don't seem to actually face into him and make eye-contact quite so much, but they still clearly look to him to provide the lead. The songs themselves are actually quite rhythically interesting (and cymbal heavy), something you discover when you try to tap your foot to the beat, so perhaps it's only natural that they should be quite so driven to follow their drummer's lead. Even so, he's an absolute joy to watch, constantly moving behind the drumkit, sometimes standing up and moving away as he continues to play. He's brilliant, and well worth the £8 entry fee on his own.

I know it's a completely different kettle of fish to watch a band in such an intimate venue compared to watching a band in a field, but I think I enjoyed this gig more than almost anything I saw at Glastonbury last week. I'm not convinced that White Denim are going to be world-beaters, but they remain a wonderfully vital live act. It's somehow incredibly life-affirming to watch three guys from Texas make such a glorious racket whilst playing with massive grins on their faces. They stopped playing after about an hour because, so Block told us, they'd run out of songs. They should definitely write some more.......

Great band. Great gig. I bought another t-shirt. What higher accolade is there?