I was crawling through a festival way out west...

Right, my more considered and fulsome review of the 2009 Glastonbury Festival has now been published on the Postculturist site.... so if you'll allow me to point you in that direction, you'll be able to gasp at my insight in those rather more cultivated surroundings instead of looking at the somewhat half-arsed set of photos of the festival below.

It's original content only over there, you know.... and Postculturist bagged the written exclusive before I left for the Festival, so what else could I do? Ah, but did that exclusive contract say anything about photos though? I quickly seized my opportunity....

Thanks for having me Queenie..... 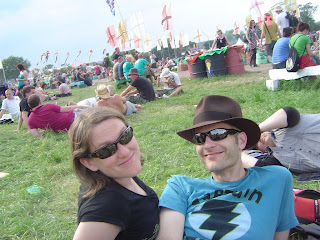