take your protein pills and put your helmet on... 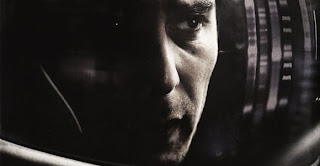 On July 20th 1969, a man set foot on the moon for the very first time and promptly fluffed his lines ("....goddammit Neil, it's 'a man' for chrissakes. How many times have we practiced this?"). Forty years later, in the midst of the celebrations to commemorate the Apollo 11 anniversary, the film "Moon" is released around the world.

The film is directed by Duncan Jones (the artist formerly known as Zowie Bowie...) and stars Sam Rockwell. It tells the story of a lone lighthouse-keeper like man who is the caretaker of a mining facility on the moon and who, after three years with only a faintly sinister robot for company, is clearly going a touch loopy. Or is he?

It's not the most original film in the world, for sure, but Jones himself remarks in a comment on the IMDB page for the film that the echoes of other films were intended as homage rather than as plagiarism:

"I wrote the story for Moon after having met with Sam Rockwell, an actor I admire immensely. We had met in NY to talk about another feature, one I hope to do next, but that was probably too ambitious to do as a first feature film. We got talking about our favorite films, and in particular a period of sci-fi from the late 70s and early 80s when character driven stories seemed to be pre-eminent. We were both fans of those films where blue collar workers tried to maintain there humanity in dehumanizing, off-Earth environments. Films like Outland, Silent Running, and the 1'st half, (pre-horror half) of Alien.

Without getting too spoilerish, there were quite a few personal things I wanted to put into this film. My feelings about how people change over time, questions that I felt we all have about our sense of worth, feelings that you go through during long distance relationships. Personal and human things. Things that, like the Moon itself, we could all relate to."

For what it's worth, I thought that the film was both absorbing and actually quite moving. I'm not sure that it ever quite escapes its influences, but I'm also not sure that it matters all that much. At a time when cinemas sometimes seemed to be filled with Michael Bay type blockbusters with ever louder explosions and more and more ambitious CGI set-pieces, it's wonderful to be able to sit quietly in the cinema and watch a film that unfolds quietly and that relies upon characterisation and performance rather than special effects. Indeed, the special effects the film does have are rather more reminiscent of something out of Gerry Anderson's Space 1999 than they are of something out of Transformers, and presumably cost a whole lot less too.

It's a really interesting, thoughtful film and well worth seeing.

....so it seems all the more of a shame then that, all the way through the film, I couldn't quite manage to shift a picture of this alabaster retard from my mind.... 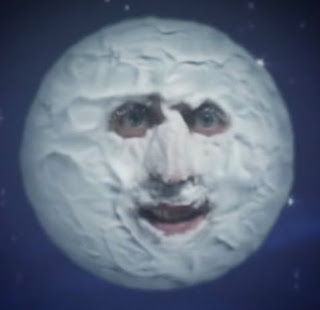 I'm itching to say more about the film, but to do so would inevitably tip the hand of the major plot devices in the film, and there will be no spoilers here today. Suffice it to say that I thought that it was a pretty decent film. Now go and watch it so that we can talk about it.....
Posted by swisslet at 21:20