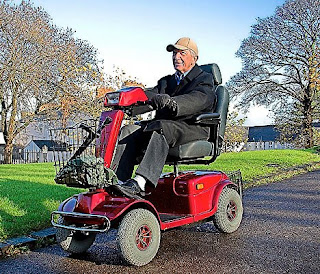 Far be it from me to impugn mobility scooters and mobility scooter users...after all, the first one was built in 1968 by a man, Allan R. Thieme, who was inspired to create the product when a member of his family was diagnosed with multiple sclerosis....

But are they really supposed to be driven at 15mph down the middle of a main road?

I was a pedestrian at the time, so I suppose I should probably be grateful that the elderly man behind the controls had chosen to scorch down the middle of the road rather than the middle of the busy lunchtime pavement I was using. Judging from their faces, I'm pretty sure that the increasingly impatient drivers in the long queue of traffic trailing in his wake were not exactly wishing the old boy long life and happiness.

I turned to watch him go past, half-expecting him to stop at the Conservative Club some 200m down the road. He did not stop. Far from it. In fact, much to my amusement, he showed absolutely no sign of stopping and, as far as I know, he's still going, with an ever growing line of irate motorists trailing in his wake.

So, if you found yourself stuck in a queue of unexpectedly heavy traffic today, you never know, perhaps he was at the front......
Posted by swisslet at 16:22