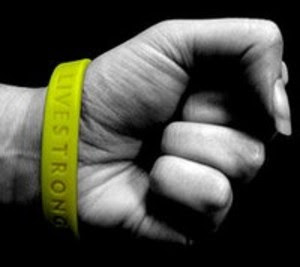 I spent half an hour this afternoon watching Alberto Contador and the Astana team take what looks like a comprehensive grip on this year's Tour de France. It was especially interesting to watch Lance Armstrong, a 7 time winner of this race, performing his duties as a domestique to Contador and selflessly doing everything he can to ensure the Spaniard holds onto the yellow jersey into Paris - it's a role that not many people thought a man like Armstrong would be willing to perform for any other rider, even though he repeatedly told everyone that the motivation for his comeback to cycling was to raise money and awareness for his Foundation and the fight against cancer.

Not for the first time in his life, he's proving everyone wrong.

As always, watching the race made me take a moment to remember my friend Tracy. Tracy was a huge cycling fan, and we first really became friends when we used to sneak off from a residential course to watch Marco Pantani winning the 1998 race. Tracy died of cancer on 4th November 1999, the same year that Lance Armstong first won the Tour de France.

In the summer of 1999, and whilst she was undergoing chemotherapy and back living with her parents, Tracy put on her best wig and her bravest face, and she threw a birthday party for all her friends. The sun shone and we had jelly, angel cakes and a bouncy castle. The birthday girl herself was all smiles all afternoon, and it was a lovely day. Barely three months later, she was dead.

Tracy would have been 41 years old this summer. She was first diagnosed with cancer in March of that year, and her decline was as shocking as it was sudden: one day she was cheerfully telling me over lunch at work how she was losing a bit of weight and had been made slimmer of the week by her WeightWatchers club, and literally the next day she was on a drip in hospital and being told she had a stomach cancer that had bloomed into her intestines.

People are quick to point the finger of suspicion at Lance Armstong and to wonder aloud whether he can have achieved all those amazing victories on the bike without cheating. People also say that he's not a very nice human being. You know what? With the amount of money he continues to raise in the fight against cancer, I really don't care. He can't do anything to help Tracy now, but he might just be helping people like her.

Tracy was a lovely, active, bubbly girl and she was cut down in her prime. I haven't forgotten her.

Email ThisBlogThis!Share to TwitterShare to FacebookShare to Pinterest
Labels: friendship