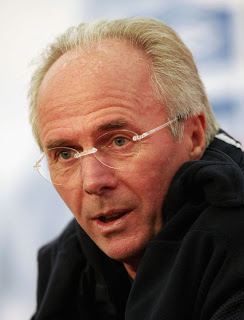 You couldn't make it up. Truth really is sometimes even stranger than fiction.

Sven is apparently keen to move up to the Nottingham area, and just in case people aren't familiar with Nottingham, the Sun was quickly on hand with the key information:

"SVEN will find it hard NOT to score in Nottingham - rated by a dating website as one of Britain's best places to find eligible totty. But he faces tough competition as its reputation has also turned it into the country's top destination for stag parties. If he's on form, Sven could maybe bag a beauty like actress Samantha Morton, who hails from the city.

Nottingham girls are famously pretty - with many descended from those drawn from far and wide to work in its historic lace industry. For post-match fun, Sven will find the nightclubs very raunchy but a far cry from many of London's celeb-infested haunts. A good place to start is the city centre venue Rock City, which has two-for-one drinks every Thursday. Then there's Tantra, which supplies romantic revellers with vast beds to lounge on. Back of the net! For an added bonus, Nottingham is groaning under the weight of student totty - mainly because its universities offer some of the country's best nursing courses. As for the boozers, the nearest to Notts County's 20,000-capacity Meadow Lane is The Globe. It serves a cracking pie and pint, but isn't famed for its lady folk. Not to worry, Sven. A ten-minute walk from the ground takes you to Hooters, a bar and grill staffed by scantily-clad girls. Sven, who's partial to a cocktail and sushi, is more likely to be offered a pint of Rock Bitter or Rock Mild made at the famous Nottingham Brewery.

Locals often down it with a large bread roll called a cob.

The ever-sartorial Swede will be pleased to know top designer Paul Smith is from Nottingham, and has his flagship store there."

Pretty girls, Hooters, Paul Smith and cobs. It's all you really need to know, isn't it?

Sheesh. "....a large bread roll called a cob"??? Where exactly do they think Nottingham is? Abroad?

The Mirror, meanwhile, focuses the full forensic power of their expert analysis on telling their readers "Why Sven Goran Erikkson would be awful at Championship Manager and why Notts Country are doomed". Apparently Ferguson, Wenger, Pulis and Hughes would be pretty good, Redknapp and Allardyce would be brilliant but they have their doubts about the likes of Ancelotti and Benitez. Sven, they reckon, would stink at the game. Quite what that has to do with anything remains unclear. Perhaps he's really good at Sonic the Hedgehog? That's probably got just as much in common with actually running a real life football club as Championship Manager.....

As you might expect, the Guardian manages to assume a vastly more sophisticated tone in their coverage, and inform and entertain their readers with a list of all the things Sven needs to know about his new club. A list that includes such vital information as this:

Perhaps they reckon that a more educated, liberal, middle-class readership will already be well aware of what a cob is?

Oh, and Hooters is not a ten minute walk away from the ground. It's much nearer than that. And all you can eat chicken wings is only £6.99 per person all day on a Monday, so it's great value. Half price ribs on a Wednesday too, and kids eat free on a Sunday....
Posted by swisslet at 14:13