This is something that has been puzzling me for some time. Over the years, people have used each of these phrases, apparently interchangeably, to describe me. Although I vaguely have an idea what they mean, I've been bothered because I haven't know exactly what they mean. They might mean similar things, but I've always been pretty sure that they don't mean the same thing. I've been called all of them, but what if not all of them applied? Perhaps none of them did? If they didn't mean exactly the same thing, then isn't there likely to be a hierarchy, where one of those words might be considered to be less - or more - insulting than another? Was I taking offence needlessly, or was I not offended enough by what people were calling me?

So: here's a chart that should provide me with some of answers I've been looking for. 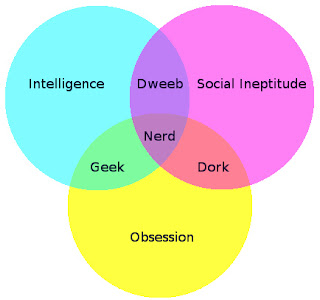 Well, I say I'm no clearer, what I actually mean by that is "Dangnabbit, I think I probably qualify for all of the above and that most likely makes me a nerd".

The chart must be inaccurate, right?
Posted by swisslet at 19:48

Email ThisBlogThis!Share to TwitterShare to FacebookShare to Pinterest
Labels: me