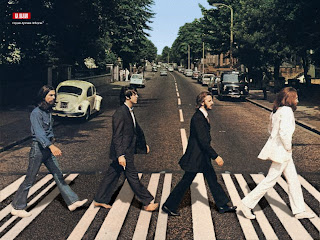 Amongst all the coverage of the launch of Beatles Rock Band last week, I heard Nicky Campbell on Five Live wondering whether there could really be anybody who would be discovering the music of the Beatles through this game. The guy he was talking to, some expert who has written a book on the band, told him that he would be surprised how many people, especially those in their 20s and 30s, were relatively unfamiliar with the band. Well, I'm in my 30s and I own several Beatles albums, so I wasn't sure about that. To test the theory, as soon as I arrived in the office, I wandered over to the 22-year old in our team:

This was a level of ignorance that I hadn't been expecting.

22y.o. subsequently had a quick trawl through wikipedia and wrote down a number of other Beatles songs or albums he thought he had heard of ("Sergeant Pepper? I think I know that one"). He thought he was normal, and if anything, he was a little taken aback by the shock with which his lack of Beatles related knowledge was causing in those who had overheard our little conversation.

Not wishing to appear stupid, he set off to prove that he wasn't the anomaly, and that there were other people with a similar lack of knowledge.

He faced an initial setback when the 18 year old who has just joined us for a placement as part of his degree turned out to be something of a fan, but he was undeterred. His policy of asking people much older than him didn't bear much fruit ("Name the band? I can name the two that left!"), but he did have some success when a surprising number of people were completely unable to name George Harrison as a member of the Beatles (surprising in that there were about four or five people who didn't know. I was mildly surprised that anyone didn't know who he was. My Sweet Lord, indeed).

I've never been one of those people who thinks that the Beatles are somehow above criticism. A band that highly praised cannot help but be overrated, if you ask me. I think what's really amazing about them is how so much of their work still sounds pretty fresh today. Not all of it does: I'd just listened to "Revolver" in the car, so I was very well aware that some of the sitar-heavy numbers in particular were very much a product of their era (or perhaps the start of the era itself?). Much of the songwriting remains incredibly fresh though. How many better song lyrics have there ever been than those in "Eleanor Rigby"? Or am I now unable to view a song that is so embedded into our popular culture with anything approaching objectivity?

Meanwhile, as 22 y.o.'s quest continued, he faced an increasing level of incredulity from those around him:
"Are your retarded?"
"Is it too late to have him shot?"
Whilst it's true that I hadn't even been born by the time by the Beatles had split up, that I had parents who weren't really into music, I still managed to discover the band. I was therefore somewhat surprised by his total lack of knowledge on the subject. Even so, I soon started to feel mildly uncomfortable about what I'd started. Was it really fair to call him ignorant? After all, "Free As A Bird" and the fuss around the release of the Anthology albums happened as far back as 1995. 22 y.o. would have been 8 years old. Is it all that surprising that he might have missed out on the Beatles entirely?

I became more uncomfortable the next day when 22 y.o. was grilled about his knowledge of Queen - much harder than knowing about the Beatles, surely? Before long he was being asked about capital cities. Perhaps he should know what the capital of Australia is, but should we really be laughing at him? He took it all in good spirit, but by the time he was confronted with "The Ultimate Beatles Quiz" from the Times, I wouldn't blame him if he was thoroughly bored of the whole thing and starting to feel a little got at. He got 0 out of 40. A big fat zero. Then again, I don't think I got more than about half of the questions.

"Who was the first Beatle to sport a moptop?"
"Name the Beatles first wives"
"Who suggested that John Lennon change the line "Waiting for the man to come" to "waiting for the van to come" in I Am The Walrus?"
"Who pressed the panic button in Yellow Submarine?"
"Who is the only guest musician to be credited on the label of a Beatles record?"

Not impossible - but if you don't know who George Harrison was, then I'd suggest you're going to struggle with some of those.

22 y.o. hit back this morning with some questions for me:

He tried to test me initially by asking me to name the members of Girls Aloud, only to find that I could (I am seeing them live at Wembley on Friday, after all....), but he found more fertile ground with some questions from a football quiz he was at on Monday night.

"Tony Roberts (the old QPR goalkeeper) was the first goalkeeper to do what?"
"Which striker made his debut for Manchester Utd in the 2007 season, playing up front with Ole Gunnar Solskaer, and made a total of 3 appearances for the club?"
"Name the three Australian players in the Leeds Utd squad in 2001"

I got none of them right, and he felt a bit better about himself (even if he actually only knew the answer to one of those questions himself...)

I don't know though. Is it right to mock someone for something like that? I might perhaps marvel at how he hasn't been inquisitive enough to pick up practically anything at all about the Beatles, but it's entirely possible that they just haven't crossed his radar. Incredible though that sounds, they just don't register with him. Why should they? Is it fair to call him ignorant because of that? They're just a band, aren't they?

At what point does the teasing become bullying?
Posted by swisslet at 19:07