I think the finish line's a good place we could start....

My official time was 1 hour, 56 minutes & 52 seconds. All my training has led me to think that I run at a fairly steady pace of between nine and ten minutes per mile. I took that to mean that, on a good day, I would be able to complete the course in less than two hours.... although I was also mindful that basically all of my training has taken place alongside either a river or a canal, and that the race itself featured a few more ups and downs. I hoped I could beat 2 hours, but until the actual day itself, I didn't know if I was going to be able to.

I've been in various triathlons and things, but I've never actually run a race like this before. There were 12,000 runners all lined up for the start, and it took me something like 5 minutes from the gun going off before I actually reached the starting line. The first mile or so was spent weaving my way through other runners and trying to find a path that compromised my running pace the least. In spite of all the traffic though, that first mile was quite a bit faster than my normal pace... probably something to do with all the excitement of the day and being carried along by the sheer weight of all the other runners. Mind you, I ran the whole thing faster than my normal pace, as the splits below show:


I think you can ignore the split for the 12th mile (I had to adjust a glitch on the GPS reading on the map Runkeeper was plotting), but those splits show how much faster than normal I was running. I overtook the 2 hour pacemarker (a guy holding a red board with the time he was aiming for emblazoned on it) in the first mile, and - in spite of a vague fear that he would appear over my shoulder any minute - never saw him again. Mind you, I am told that the 2:00 pace marker was actually overtaken by 2:15, so something was wrong somewhere. I didn't actually believe that I was going to beat 2 hours until I went through the 10 mile marker in 90 minutes. 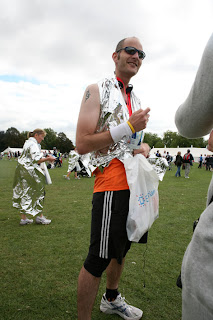 Although I was very sore on the last mile, especially in my hips and in my calf muscles, I was actually more surprised at how much of an emotional rollercoaster I found the race. I seemed to vacillate wildly between feeling strong and positive, and feeling quite the opposite. I played little tricks on myself like plotting 3 miles as being a quarter of the way there; 4 miles as a third of the way there; 6.5 miles as halfway..... but it was still sometimes a struggle not to feel oppressed by the amount of running I still had to do. The hardest part of the course for me was actually the last couple of miles, even the last 400m, with the finishing line literally in sight in front of me. That was when I felt the most crippled by the distance seeming to not get any shorter. Never has 400m felt quite so disproportionately far. Other stretches were a doddle: running down the Derby Road the first time; running down through the fallen leaves of that tree-lined avenue in Wollaton Park... Indeed, the eleventh mile felt the shortest of the lot, as I rounded the bottom of Castle Boulevard and turned towards the Experian offices and the last, painful, couple of miles.

I listened to my playlist on my iPhone throughout, and also had the Runkeeper application keeping my up to date with my pace and progress. Funnily enough, although I must have listened to loads of tracks and used them to distract me from how much my legs were hurting... I can actually remember very few specific songs. "Keep On Rocking in the Free World" helped me up that nasty hill at the University, "Hiphopopotamus vs Rhymenoceros" took me around the lake, "Ace of Spades" helped me up the long hill in Wollaton, "Touch Too Much" helped me up another nasty little incline.... but generally it's all blurred into the background.

Actually, thinking back, I can't even really remember the detail of the route we ran either. I know it in outline, but if I try and think back to running the course, the details become quite sketchy. Even when I was quite fresh, apparently I was concentrating more on the runners around me and on my running than I was on exactly where I was going. That's not to say that I didn't look at the crowds and the spectacle of the race itself, because I did: I enjoyed the huge variety of other runners, with most seemingly representing a charity. There were people of all shapes and sizes, with some athletic types wheezing on the floor having a breather after a couple of miles, and other far more unlikely looking runners breezing past me with a mile to go. The crowds were brilliant too. I was cheered off at the start by our own little pack of supporters, and again at 8 miles going up a nasty hill... but the crowds lined the route throughout and it was great to be clapped and generally encouraged.

I wish I could say that I felt a tremendous rush of emotions when I finished too, but I was so physically and mentally tired that I could barely lift my leg up to have my timing chip removed from around my ankle. I had about twenty minutes to myself before I caught up with everyone else, and I was busy doing mundane things like taking on board lots of fluid, eating the Mars bar that was in my little finishing pack and trying to stay warm. After that, I was busy cheering C. and LB to the finishing line. It was only really much later on that I started to get a sense of quiet satisfaction at a job well done.

C. came in at 2 hours, 18 minutes & 41 seconds, with LB being sightly harshly - given they crossed the line together - clocked a second later. They started the race together, separated when C set off down a hill like she was on rollerskates, and came together again in the last couple of miles when LB caught up with a struggling C. and helped give her the encouragement to get over the finishing line. They did really, really well and I'm very proud of both of them. They beat the first marathon runner in, anyway, which is just as well as he sprinted / floated his way to the finishing line in about 2 hours 20 minutes. Well, he gets paid to do this sort of thing, so.... 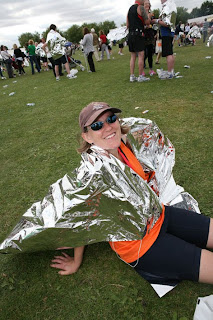 Between the three of us, we have raised (so far) a total of £2,640. On top of that, the MS Society will receive a further £480 in Gift Aid.... this gives us a grand total of around £3120. That's a fantastic achievement - especially given that I was initially hoping to raise a mere £1000. I am really grateful to every single one of you who has made a donation, however small, or offered us any kind of support at all as we've pushed ourselves through all those endless, dreary miles in training. It was a real incentive to keep on going even when every fibre of my being was telling me to stop.

There may be some more photos appearing here as and when I gather them all together (some are on my dad's phone, some are on the official photographer's website (here are the ones of me and the ones of C - also featuring LB). You never know, LB or Hen might put some up at their places too.

It was a good day. My legs are quite sore today (and oddly getting more sore as the day goes on), but I'm off for a curry now, so it's all good. I'm not in training any more, you see....

Not until tomorrow, anyway.

Perhaps the London Triathlon next year. That's the one I had to drop out of at the last minute in 2005 when I first started seeing my neurologist. No promises, but it feels like unfinished business.....

It's not too late to add to our kitty for the MS Society either. You can still sponsor us here.

Thanks everyone. That's a wrap.
Posted by swisslet at 18:46

Email ThisBlogThis!Share to TwitterShare to FacebookShare to Pinterest
Labels: exercise