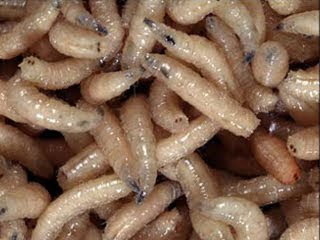 When I got home from the pub quiz last night, I was a little surprised to see that someone had covered my front doormat with rice. I'd only had a couple of pints, so it didn't take long for me to realise that this was a somewhat unlikely scenario, and so I had a closer look: the bits of rice were moving. The mat - and in fact the whole of the little storm porch the mat sits in - was swarming with maggots. Nice.

It was by now 23:30 and I was quite keen to get to bed. C. wasn't due home on the late flight from Prague until later. For a fraction of a second, I contemplated stepping over the mat and pretending I hadn't seen anything. Well, they definitely weren't there when I left earlier, so perhaps I could mount a convincing defence about them not being there when I got home.

With a deep sigh, I opened the door and stepped over the writhing masses to help me mount a defence against the invaders. My first act was to gingerly pick up the doormat and to carry it around the corner to the bin. It was pretty old anyway, has been peed on numerous times by various cats annoyed that our Minou has disappeared through her cat flap and that they don't have the magic key that allows access, and so it was no great loss (and perhaps it exuded a smell that was attracting the damn things in the first place). My next step was to sweep the remaining maggots into the dustpan and to toss them down the drain. Easier said than done. For one thing, they seemed to be a little sticky and were actually quite tricky to sweep up. I persisted, but it quickly became obvious that more were arriving almost as quickly as I was sweeping them up. What's more, the wheelie bin round the corner was now covered in maggots too, climbing off the doormat I'd tossed in there earlier.

Where on earth were they coming from? I fetched a torch and had a look around: although they were making a beeline for my front door, they actually appeared to be coming in off the street. I looked around at the various wheelie-bins nearby, but there was no obvious cadaver or anything. It was now getting pretty late, so in a last-ditch attempt to clear my lines, I boiled the kettle a few times and filled a bucket with a mixture of boiling water and bleach. A few applications of this seemed to slow the tide, if not actually stop it, and I was soon aided by the arrival of reinforcements in the shape of C. and her willingness to pop every moving maggot she could see with the toe of her shoes. By about 01:15, we looked to have won the skirmish. The area around the door was clear, I'd emptied the hoover of live maggots, and the bin looked much quieter after an application of boiling water and bleach. I retreated to bed, not entirely convinced that I wouldn't wake up to a front hall filled with writhing maggots. Luckily I slept a dreamless sleep.

As it happened, by the time I woke up, it was as if nothing had happened: apart from the odd cadaver, the porch and the bin were completely free of live maggots. They say that the weather this year has been perfect for bugs, being just the right combination of warm and damp. A rise in the number of ladybirds is one thing though; an infestation of maggots something else entirely.

Yuck. Good job I'm not really squeamish (or that I hadn't had more to drink. Can you imagine stumbling across that after a skin-full?).

But a few mysteries remain: where on earth did they come from? Where did they go? Is that it? Is this something that happens every year? Does it always only last for a few hours? Was I actually pretty lucky/unlucky to have witnessed it at all? So many unanswered questions.

Email ThisBlogThis!Share to TwitterShare to FacebookShare to Pinterest
Labels: the natural world