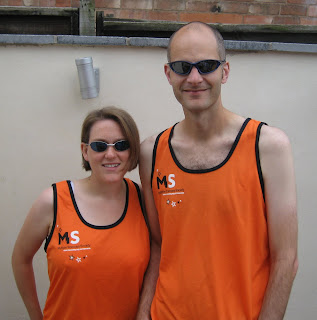 The half-marathon is now only ten days away. My training programme peaked with a 12 mile run last week, and has now started to taper down. Well, I say taper down - I still went on a six mile run this morning....but the hard work has now been done and it's now just a question of getting to race day and getting the race done. As an example of the differences in our lifestyles, my run this morning took place along the Grantham canal; C's run took place around Wenceslas Square in Prague. Not as glamarous as it sounds, apparently.

As promised / threatened, I have updated the picture on our JustGiving pages. Instead of a fuzzy picture of me finishing a triathlon, I've now put up this rather fetching picture of the pair of us in our lovely MS Society running vests.

Our original fundraising target was £1000, but people have been so generous that I've now uplifted that to £1250, and we may even get beyond that. Whatever else they may be, my company have also agreed to match the first £500 that we've raised, so we should be able to donate something approaching £2000 to the MS Society by the time we're done. Not bad. I've said it before, but I think it bears repeating: I have been both touched and humbled by your generosity. A pretty hefty chunk of the money we've so far raised has come directly from readers of this blog, much of it from people that I've never even met. Thank you. From the bottom of my heart, thank you. Without wanting to get too soppy about it, your generosity and kindness is a real inspiration.

We've also acquired a new member to our little team: as of last week, LB has entered the half marathon too and will be raising sponsorship on our behalf. He's an old hand at this kind of thing, so we'll naturally be looking to him for tips about how to get around the course, guidance on our refuelling habits, that kind of thing....

Ask me again when I'm halfway round, running up a hill into a headwind in a torrential downpour, but as of now, this has been an entirely positive, life-affirming experience.

You can still donate via our JustGiving page. Every donation, no matter how small, is gratefully received and will go to a really great cause.