...not an ordinary son 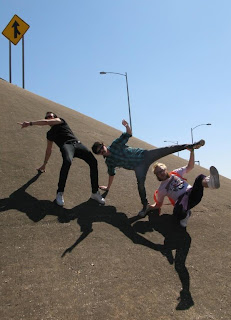 It's not often that you see a support band that really catches the eye. Well, to be honest, it's not that often that I turn up early enough to a gig to catch much of the support act at all, but.... Norwegian three-piece, Ungdomskulen, providing support for the Young Knives at the Rescue Rooms back in 2007, didn't so much grab my attention, as seize it from me, wrestle it to the ground and pummel it into submission. They were fantastic. They were loud, they had great songs, a nice line in self-deprecating onstage banter and they were clearly all brilliant musicians. The Young Knives were good that night, playing material from their about-to-be-released second album, but by their own admission, they were always going to be struggling to out-do their own warm-up band.
"You pick the support act, and they turn out to be the best band in the world.”

I was so impressed that, for the first time in my gig-going life, I was moved to make my way over to the merchandising table and to get myself a CD. To be honest, I wasn't sure if I was ever going to be able to find an Ungdomskulen CD anywhere outside of Norway, so I thought I'd better seize the opportunity whilst I could. The record doesn't quite capture the majesty of their live act, but it's good enough and an excellent reminder of a happy night.

So when Mike suggested a trip out to Derby to go and check out Ungdomskulen again, I jumped at the chance. Actually, the main reason for heading over to the Derby badlands was the chance to meet Gordon, but the lure of the band was a pretty strong incentive. In spite of living barely 10 miles away from the place, I can count the number of times I've been to Derby on the fingers of one hand (five. I couldn't say how many the locals have...) I've been there on work business a few times, and I've been to a couple of gigs. I'm sure it's a nice enough place, but when you live in Nottingham, there has to be a greater incentive than "nice enough" to go and hang out somewhere. In searching for the Royal, Sarah and I actually walked through a couple of small streets that looked to have some really nice bars and restaurants. Perhaps Derby wasn't such a bad place? Hmm. Soon enough, we turned the corner to find ourselves on a big street with loads of bus stops and taxi ranks, and were confronted by the not-terribly edifying sight of a young man in a tracksuit shouting at the backs of a small gaggle of girls walking away from him:
"Yeah. You're nice. And you're friend's nice too. Not the one next to you, but the one after that."
As mating strategies go, I shouldn't have thought that's the most effective, but I'm not from Derby, so.....

Sarah and I found ourselves a nice, unprepossessing old-school fast food joint and dined in style up chips in naan bread and a nice greasy cheeseburger, and then we went out to meet up with Mike, gain entry to the venue and meet up with Gordon.

I think it's Fresher's Week in Derby, and the Royal appeared to be running some sort of club night for the new intake. Freshers, clearly marked by the wristbands they were all wearing, were free, but we old-timers were admitted to see the bands for the princely sum of £2. The support acts in the main bar made conversation impossible, but we soon managed to find a pew in the large, chandeliered chill out bar where some DJs were busy entertaining themselves (if no one else) with their mixing skills in an almost deserted room. We met Gordon, we drank Carlsberg (who appear to have a monopoly on the joint) and we chatted as the white boys in their over-sized baseball caps went about their business. At one point, I could have sworn I saw one of the guys take off his massive baseball cap to reveal a smaller one underneath, but I could perhaps have imagined that. They were having fun, anyway, and I was enjoying the company too much to care for their assortment of bleeps and nurdles. 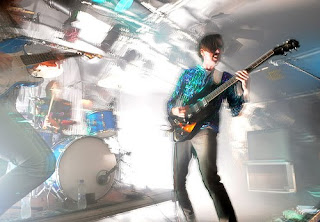 The main room was disappointingly empty when Ungdomskulen first appeared onstage, but soon filled to the point of respectability when they began to play. They've not changed much since 2007: the singer's facial hair has grown out magnificently, the bassist (who is actually playing a six-stringed baritone guitar) still has a luxuriant moustache and the drummer... well, the drummer looks like he's walked into the wrong band. Happily, something else that hasn't changed much is their thrilling live act. They have technical difficulties during their first song when the microphone doesn't work, but this band are more than happy to jam until they are resolved. How much would you trust a soundman who needs pictures of the positions the sliders should be in on the sound-desk? Ungdomskulen live are a different proposition to the Ungdomskulen on record: live they are heavier and louder, but also much looser and improvisational. They're good on record, but they really make sense live. Like White Denim, another trio I've seen recently, they are driven on by a sensational drummer, but all seem to be fantastic musicians in their own right, comfortable enough with each other and with their material to let it stretch out and breathe. Some bands - most bands - like to work strictly within the constraints of the song as it was originally written and recorded. Not Ungdomskulen. On record, their songs are frequently very long and feature prog-rock like breaks and sudden changes of pace and direction, all clearly very carefully thought through and structured whilst also still sounding spontaneous. Live, they add an extra dash of that spontaneity, and they also aren't afraid of throwing themselves into their songs with real gust. They look unlikely, but they are a real treat.

They've got a new album out, but much of the material they play tonight in their short seeming 45 minute set is taken from their last album, "Cry-Baby": Ordinary Son, Glory Hole, Modern Drummer and the superb rock wig-out of Spartacus. They're superb. Mike might keep his legendary pointy-fingers to himself tonight, but the drummer still sees him dancing and tells him so at the end of the set. No wonder, even a confirmed non-dancer like me can hardly keep still during these songs. The crowd might be small, but they're enthusiastic, even if the glamorously dolled up girls turning up for the club night that follows the band seem mightily confused and soon leave at the sight and sound of this remarkable band (even if the cow-bells on Modern Drummer convince one or two of them to stay until the singing starts!). The earnest, introverted-looking bespectacled indie-kids in front of me nod their approval at what they hear, anyway.... truly a band they can proudly file alongside all those other awkward bands in their record collections.

A great night and a fantastic band.... hard to believe that you can see an act this good for £2 (or free, if you're a fresher... which sadly I haven't been since the frighteningly distant 1992).

Great to meet Gordon too. I hope he enjoyed the gig as much as I did. In fact, for the second-time in my gig-going life, I was inspired to get a CD. Drummer Øyvind was kind enough to throw in a button badge for free too, so I was well pleased. A good night.