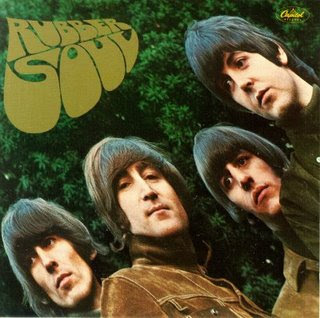 I already own quite a few Beatles albums: Abbey Road, The White Album, Revolver, Sergeant Pepper (obv.) and various collections.... but I only got around to finally getting myself a copy of "Rubber Soul" when I turned the corner in the supermarket to find myself confronted wall of top 40 albums that was unexpectedly dominated by old Beatles records. I knew about the digital remastering, of course, but for some reason I hadn't imagined that Michael Jackson's dominance of the album chart would be replaced by a band even older and still more successful.

It's an album that's intrigued me for a little while. I wouldn't say that I was a Beatles nut, but I am interested in the band, and I love dipping into Ian MacDonald's seminal piece of scholarship on their music, "Revolution in the Head". If you aren't aware of this book, it's a song-by-song breakdown of every single record the Beatles made. Apart from the obvious fascination of seeing who wrote and played what on every song, and a description of the various influences at play, what makes this book great and sets it apart from the crowd is the way that the author is most certainly not afraid of telling it how he hears it. Too often we see the work of this band being canonised. They are, after all, the great Beatles. I still find it refreshing to read the work of a critic who is (mostly) able to keep his objectivity intact whilst listening and commenting on songs we've all heard hundreds of times before. Much of their work still stands up, of course, but crucially, not all of it.

How about this on "All You Need is Love":

"One of the Beatles' less deserving hits...slapdash atmosphere in which it was made...sloppiness on show...The Beatles were now doing wilfully substandard work: paying little attention to musical values and settling for lyric first-thoughts on the principle that everything, however haphazard, meant something and if it didn't - so what? .... drug-sodden laziness...lotus eating delusion of an egalitarian life of ease...."

or this on "Helter Skelter":

"Condensed for release on 9th September, the result was nevertheless ridiculous, McCartney shrieking weedily against a massively tape-echoed backdrop of out-of-tune thrashing.. few have seen fit to describe this track as anything other than a literally drunken mess."

I could go on, but I think you probably catch my drift. Good band, but they sure weren't perfect. If anything, MacDonald generally sounds annoyed and disappointed when a great band, clearly capable of so much, fail to live up to their potential. Must try harder.

"Rubber Soul" is an especially interesting album because it is supposed to catch the moment that the Beatles stopped being the mop-topped pop band of their early albums and started to move into the more experimental second-half of their career. As Ian MacDonald wrote:

"Gradually realising, from Dylan's example, that they didn't have to segregate their professional work from their inner lives, they consciously experimented in much of the "Rubber Soul" material, feeling their way towards a new style - one which, defining the second half of their career together, would be inspired by their encounter with one of the biggest influences on life and culture in the late sixties: LSD."

"Rubber Soul" proves that music doesn't have to be about great singles, but can also be about producing a great album. There's not a track on the album that was released as a single, but feel the quality: Drive My Car, Norwegian Wood (This Bird Has Flown), Nowhere Man, Michelle (laughably described by The Sun the other day as being "Greek influenced"), Girl, In My Life.....

Not that I'm claiming that as any great insight onto what is widely proclaimed as one of the greatest albums ever recorded. I'm not sure the digital remastering adds too much - not to my ears, anyway - but it's still a decent record by anyone's standard.

Great cover too. Growing out their mop tops, but pre-dodgy moustaches and afghan coats. The Beatles looked great around this time too.....

Good band - you should check them out. Remember you heard about them here first.
Posted by swisslet at 22:46