When I first started visiting a neurologist on a regular basis, I learned two things very quickly: At first I was stunned at how much insight medical science was able to tell me about what was going on inside my body. It's quite hard not to be at least a little bit impressed you are confronted by the most incredibly detailed images of your own brain. 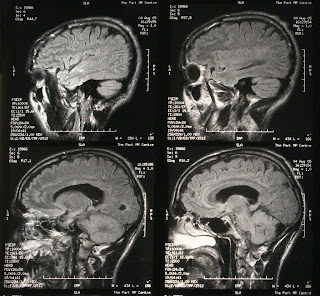 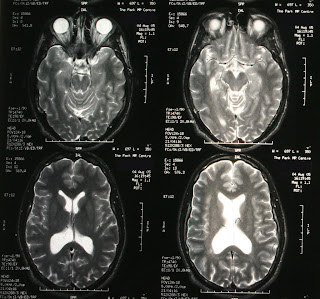 It was cross-section images like these - and those actually are pictures of my brain you're looking at there - from the MRI scanner that enabled my neurologist to find the lesion on my cervical spinal cord and to diagnose the cause of the numbness and pins & needles I had been experiencing. That initial sense of awe was quickly followed by a very clear understanding that, for all that medical science did know, there was still an awful lot that they didn't. It took nearly four years from those initial scans for me to be finally diagnosed with multiple sclerosis, as various neurologists looked for evidence that I had fallen across their arbitrarily drawn diagnostic lines. Some of the tests I regularly undergo seem almost ridiculously random: can I walk heel to toe across the room? can I stand on one leg with my eyes shut? can I feel a scratch across the soles of my feet? can I follow the tip of the doctor's finger without moving my head? From these tests, I am given a score that determines my level of disability.

This score is, in turn, then used to help assess what treatment I may be eligible for. I'm sure it serves a purpose, but how scientific exactly is a test like this when a bad hangover might significantly impact your score?

Multiple sclerosis itself is a well-funded condition and receives millions of pounds worth of research every year, and yet actually very little is really understood about it: we don't know what causes it; we don't know what triggers attacks; we don't understand if it's genetic or hereditary or caused by environmental factors; we don't know why it seems to affect more women than men and we certainly don't know how to cure it. We don't even seem to be entirely certain that MS is a single condition at all or if it's actually an umbrella term we unknowingly use for a number of similar conditions that we cannot tell apart. It's a condition that is notoriously difficult to diagnose, and once diagnosed, it's impossible to say how it will progress from one person to the next: some people will be hardly affected by the condition at all, and other people will quickly end up in a wheelchair, and no one really understands why this is.

This lack of understanding spreads to the treatments: we think that beta-interferon slows down the onset of disability and increases the gap between relapses, but we don't really know why and we aren't entirely sure how well it works, so we inject ourselves, put up with the side-effects and we hope for the best. Research is also looking into various other drugs and that might make a difference to the onset and management of the condition, from anti-cancer drugs through to worms, but basically we're shooting in the dark and have no clear idea of what the hell we're doing or if we're really making any kind of a difference.

Then I read this: the story of how an Italian researcher, inspired by the desire to find the answer to his wife's MS, may have discovered that multiple sclerosis may not be an auto-immune disease at all but a vascular one.  To quote that article:

"Using ultrasound to examine the vessels leading in and out of the brain, Dr. Zamboni made a startling find: In more than 90 per cent of people with multiple sclerosis, including his spouse, the veins draining blood from the brain were malformed or blocked. In people without MS, they were not.  He hypothesized that iron was damaging the blood vessels and allowing the heavy metal, along with other unwelcome cells, to cross the crucial brain-blood barrier. (The barrier keeps blood and cerebrospinal fluid separate. In MS, immune cells cross the blood-brain barrier, where they destroy myelin, a crucial sheathing on nerves.)  More striking still was that, when Dr. Zamboni performed a simple operation to unclog veins and get blood flowing normally again, many of the symptoms of MS disappeared. The procedure is similar to angioplasty, in which a catheter is threaded into the groin and up into the arteries, where a balloon is inflated to clear the blockages. His wife, who had the surgery three years ago, has not had an attack since."

Now, I'm a sensible man, and I'm hardly likely to get carried away by this - not least because Zamboni's sample was of only 65 people with MS and 235 without.  The MS Society is advising caution, of course, but a proper study has been commissioned by the University at Buffalo, New York.... but if there does turn out to be any foundation in this at all, then it could be nothing less than revolutionary.  Just think: it might be possible that a simple operation could take this apparently incurable condition away from me - and everyone else - forever.  The damage that has already been done would likely remain, but it wouldn't get any worse.  Imagine that.

There's a long way to go before we see if this research bears any fruit, of course, but given that everything else about MS seems to be little better than educated guesswork aimed at damage limitation, I can't help but be a little excited at the way that a new hope has emerged that could change the game entirely.  If this research is confirmed, then there will be nothing less than a paradigm shift in the diagnosis and treatment of MS: we won't be talking about damage limitation any more, we'll be talking about catching this disease before it causes any damaage and stopping it dead in its tracks.

I'll carry on injecting myself once a week as normal, but if that isn't grounds for optimism, then I don't know what is.
Posted by swisslet at 19:56