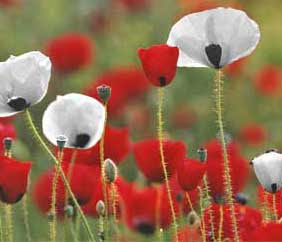 Something like 10m soldiers, and who knows how many civilians, were killed in the First World War. It was supposed to be the 'War to End All Wars', something so terrible, so utterly awful that it could surely never be repeated. It wasn't, of course, and a barely more than two decades later, the world was again inflamed in war, and a total of something like 70m people died in an even more destructive and all consuming conflict. Even that wasn't the end, and mankind has been trying to settle its differences by force pretty much continually ever since, just as it had been in all the centuries before.

The Royal British Legion was founded in 1921 to provide financial, social and emotional support to ex-servicemen and their families. Almost from the very beginning, their emblem was the red poppy: this fragile, resilient flower was one of the first plants to return to the shell-blasted fields of Flanders between the trenches; it was a symbol of renewed hope, whilst the colour red somehow symbolised all of the blood spilled on those fields. In the run up to Remembrance Sunday on 11th November each year, millions and millions of paper poppies are sold to raise money for the British Legion and also to symbolise all those people whose lives have been affected by war.

I don't hold with the concept of a 'just' war. I know that plenty of people will disagree with that, but I just don't want to believe that anything can be worth all that death and suffering. But opposition to war does not have to mean opposition to the people fighting those wars, and I find this time of year extremely moving, and I will wear my poppy as my own personal mark of respect.

You might remember the newsreader, Jon Snow, getting caught up in a storm a couple of years ago when he refused to wear a poppy on air and criticised what he called "poppy fascism" (it wasn't just poppies - Snow refuses to wear any other charitable emblem whilst on air). His refusal was seen, in some quarters, as disrespectful. John Humphrys was reported as saying:

"The reason I wear the poppy is because I want to pay tribute, it is a mark of respect for those men who gave their lives so that I can live the way I do today - to protect my freedom. And if there is anybody in this country who does not feel that gratitude then I think they should feel vaguely ashamed of themselves."

Hmm. For me, this is problematic. I absolutely and categorically want to pay tribute and show my respect for people who gave their lives in war.... but what about all the poor sods on the other side who were wounded or killed? What about them? How much of a say did they have in the war they were fighting? Do their relatives suffer their loss less? As well as respect, does the red poppy have other connotations of Allied soldiers figthing a just war? The Irish certainly seem to think so, and the poppy is widely worn by Unionists as a symbol of the involvement of the British Army in Northern Ireland, and as such is rejected by more nationalist political parties. But if I want to pay tribute, what choice do I have?

Well, as it happens, there is a choice: you can wear a white poppy . The white poppy is meant to symbolise peace, and aparently has a history stretching back to 1933.

"The White Poppy symbolises the belief that there are better ways to resolve conflicts than killing strangers. Our work, primarily educational, draws attention to many of our social values and habits which make continuing violence a likely outcome. From economic reliance on arms sales (Britain is the world's second largest arms exporter) to maintaining manifestly useless nuclear weapons Britain contributes significantly to international instability. The outcome of the recent military adventures highlights their ineffectiveness in today's complex world. Now 90 years after the end of the ‘war to end all wars’ we still have a long way to go to put an end to a social institution, which in the last decade alone killed over 10 million children."

I like the idea that the white poppy is intended to represent all people on all sides whose lives have been affected by war, and to symbolise the desire to settle our differences without recourse to armed conflict..... but people being people, of course, we just end up arguing about the colour of poppy that we chose to wear to remember those killed and wounded in war.....

After some thought, I've decided that I'm going to wear both: I'm going to wear a white poppy to symbolise my opposition to war and my respect for all victims of war, but I'm also going to wear a red poppy because I want to contribute directly to the Royal British Legion funds that are used to support the victims of war and their families (the money raised by the white poppies goes towards peace campaigning, which is good, but not exactly the same thing). A compromise, perhaps, but it's my own personal statement of remembrance and hope for the future.

Ultimately, I don't think it matters whether you wear a white poppy, a red poppy or no poppy at all. The important thing, surely, is to honour the memory of the dead and to help the living. In a year that saw the death of Harry Patch, the last surviving soldier to have fought in the trenches of the First World War, we've finally lost that immediate, human link with the 'war to end all wars' that ended more 91 years ago. We do try to remember, especially at this time of year, but with wars being fought all over the world today, we do also seem to be very forgetful.

In Flanders fields the poppies blow
Between the crosses, row on row
That mark our place; and in the sky
The larks, still bravely singing, fly
Scarce heard amid the guns below.

We are the Dead. Short days ago
We lived, felt dawn, saw sunset glow,
Loved and were loved, and now we lie
In Flanders fields.

Take up our quarrel with the foe:
To you from failing hands we throw
The torch; be yours to hold it high.
If ye break faith with us who die
We shall not sleep, though poppies grow
In Flanders fields.

...Oh, and yes, I am aware that the white poppy is sometimes held up by religious types as a more "christian" colour to wear than the red. Well, like I say, I know why I'm wearing it.

The top news story when I woke up this morning was the five soldiers killed in Afghanistan. Their deaths are tragic, no doubt, but am I alone in finding it slightly strange that the death of some soldiers fighting in a war so newsworthy? Apparently we've become so used to our troops being blown up by bombs that it's mildly unusual to have some killed by bullets. There's also a vague suggestion that the Taliban were somehow not playing fair by infiltrating the Afghan police and then ambushing our troops. Um.... did the Taliban sign up to some sort of code of conduct for warfare that I'm not aware of, or are they desperately fighting a struggle for their own survival against people they undoubtedly see as foreign invaders? I'm sorry these guys have died, just as I'm sorry when anyone dies, but since when did we think there were rules to war?

Wear a red poppy this month, by all means, but surely we can find a better way to settle our differences than by killing each other?
Posted by swisslet at 23:23