ain't about what's waiting on the other side.... 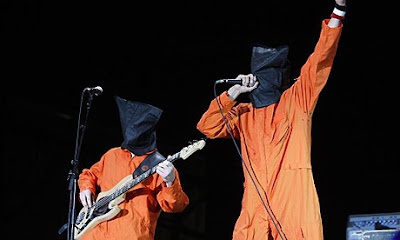 I know I said the other day that I wasn't really that fussed if the X-Factor song or Rage Against the Machine made it to Number One in the singles chart..... but at some point last week, I realised that I really, really did care. It's not that I've got anything against Joe McElderry, or that I have a particular problem with people buying his single (even though I find it stupefyingly dull and I'm mildly incredulous that they've chosen to cover a song that was only in the charts in March this year). I'm not even that fussed by the whole idea of the Facebook campaign - I can sort of understand the "silent majority" wanting to hit back against the whole X-Factor dominance of the media, but I've not really been that concerned about what's at the top of the singles chart for a pretty long time now, so why worry about this week in particular? Why care about the Christmas Number One in 2009 when I haven't been that bothered about it in about a decade, long before all those X-Factor songs on the last 4 years.

I reckon there are two main reasons why I find myself suddenly caring: the first is that it's just such an incredible song. I can't really put this any better than Charlie Brooker, so I'll quote him in full on this:

"...I happen to think Killing in the Name is an excellent song, so I've already got something out of it. Most importantly, it contains genuine emotion. Even if the climactic repeated howls of "Fuck you, I won't do what you tell me!" put you in mind of a teenager loudly refusing to tidy his bedroom – as opposed to a masked anarchist hurling petrol bombs at the riot squad – there is at least an authentic human sentiment being expressed. Zack de la Rocha is audibly pissed off.

Compare this to the pissweak vocal doodle that is Joe McElderry's X Factor single. For a song whose lyrics ostensibly document an attempt to gather the spiritual strength to overcome adversity and thereby attain enlightenment, The Climb is about as inspiring as a Lion bar. It's a listless announcement on a service station Tannoy; an advert for buttons; a fart in a clinic; a dot on a spreadsheet. Listening to it from beginning to end is like watching a bored cleaner methodically wiping a smudge from a Formica worksurface."

Yes, there's a lot of funny swearing on Killing in the Name, and yes, it was hysterical last week when Five Live allowed the band to perform the song live on their breakfast show and were then horrified when they launched into all that swearing. Apparently they'd said they wouldn't play that bit.... and then did anyway, to no one except the BBC's surprise..... but just as it did when I first heard it in 1992, what strikes me most about the song is the passion with which it is delivered. It hit me then, and it still hits me now. It's a thrilling song being played by a band who really, really mean it, and I love hearing it.  I've got nothing against anyone who prefers "The Climb", and it's not my intention to sneer at anybody else's taste in music (not today, anyway).... but I simply prefer "Killing in the Name"; I choose the shouty, sweary rock.  If they'd chosen something else, then I might not have been so bothered.  But they chose this, and it's brilliant.

The other thing about the whole campaign is that it has showed that people do still care about music. You can wonder about the futility of the gesture, and you can question people's motives for choosing and downloading this song in particular, but I think there's something marvellous about the fact that the 2009 Christmas chart has been such a talking point this year.  For the first time in who-knows-how-long, the Christmas Number One really seemed to matter, and I don't think it was just a case of everyone wanting to stick one on Simon Cowell. Loads of people will have listened to the chart rundown on Sunday night for the first time in years. Of course, Joe will probably make it to Number One next week, and will no doubt have the biggest selling single of the year having sold at least 200,000 records more than Cowell might have hoped, thanks to all that publicity... but the fact is that more than 500,000 people cared enough to download a track that is 17 years old, and another 499,000 odd people went out to buy the X-Factor single. Lady Gaga, at Number Three in the chart, sold something like 17,500 tracks. For one week at least, people really cared about music. And, let's not forget, that more than £65,000 raised on the Facebook page, plus RATM's royalties for the track, will all be donated to Shelter. Even if you really, really felt that Joe deserved to be at the top of the charts, surely you can't argue with that?

"If the Christmas No 1 turns out to be an angry, confrontational rock track that concludes with an explosion of f-words, it'll be precisely the shot in the arm the charts have been sorely lacking the last few years: something that puts a genuine smile on the face of millions of people; sensitive people, thoughtful people; people alienated by the stifling cloud of grinning mechanical pap farted into their faces on a weekly basis by cocky, clattering, calculating talent shows such as X Factor. It would give these people hope. Maybe only in a very small and silly way, but still: a tiny spoonful of hope. And what could be more Christmassy than that?"

I don't know if I've been exactly alienated by the charts, I just haven't cared about them. I don't really care about them now - Rage haven't changed that - but for the first time in a long time, I DO think we have a genuinely brilliant, exciting record at the top of our festive charts (and I choose to see that as an endorsement of how fresh a 17 year old record still sounds rather than a reflection on the sterility of the 2009 charts).   I'm sure that all this fuss won't amount to a hill of beans in the long run, and I'm sure X-Factor, Cowell and even poor Joe's career will carry on undaunted, but for now at least we get to hear this great song on the radio and hope that a new generation of listeners will discover the brilliance of Rage Against the Machine.  That alone would make the whole thing more than worthwhile in my books.

Now what are the chances of having Killing in the Name added to those interminable Christmas compilations along with Shaky, Macca, Wizzard and Slade, eh? Or, like all of those other festive records, would we get to October already sick of hearing it pumping out of PA systems as we trudge around the shops already bedecked in tinsel and special offers?
Posted by swisslet at 08:45