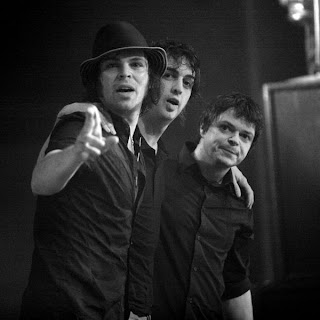 Apparently "Santagrass" is the annual gathering of Supergrass fans in Oxford for a special Christmas show. This was only the third such show, but -- at least in the minds of the band -- it appears to have become as much a part of Christmas as mince pies, brussels sprouts and Slade.

Supergrass are one of those bands that I've sort-of been listening to for years now. I can remember revising for my finals at University in 1995 and listening to "I Should Coco" as Belinda Carlisle flew in by helicopter to play a show at the student union. If memory serves me correctly, that album was released at about the same time as Radiohead released "The Bends". Where that other famous Oxford band were just hitting their stride and were becoming the serious, credible face of British rock music, Supergrass were young and, as "Alright" jauntily reminded us, they ran green and also kept their teeth nice and clean. Steven Spielberg may have wanted to make them into the next Monkees, but there always seemed to be something more organic about the band, and their biggest hit single was not actually all that representive of what they were about.

Sure enough, subsequent albums saw the band trying to flex their musical muscles and to grab a bit of credibility. Although they couldn't entirely bury their knack for a tune, they have certainly never recorded anything like "Alright" again, seeming to have a mild sense of shame about the song (although actually, "Pumping on Your Stereo" with it's muppet inspired promo video probably comes closest). I actually stopped buying their albums after "In It For The Money", although picked up their Greatest Hits as a lazy way of picking up the songs I didn't have. I had them pegged as a decent band whose impetus had sort of faded away after a great start. I've seen them live a couple of times, each time as a support act at a big outdoor gig, and although they were decent enough, they never really blew me away or otherwise encouraged me to look out for the albums that I had missed.

The Regal is a little further up the Cowley Road in Oxford from the Zodiac (now sadly another Carling Academy). It used to be a cinema, and has a lingering air of faded glamour, as well as a large standing area with a high ceiling, and a small balcony with some seating. It reminded me, oddly, of the Blackpool Empress Ballroom, albeit somewhat less ornate and with more peeling plasterwork. A good place to see a band, I thought. They were serving mulled wine, there were lots of people wearing Santa hats, and the band came on and opened up their set with "Sun Hits the Sky".... this, I thought, could be brilliant.

In the end, it wasn't really. Supergrass were, if you ask me, distinctly average. They stuck around for something less than an hour-and-a-half, made their way through 18 songs including "I Saw Mommy Kissing Santa Claus", a decent smattering from their older albums, and a couple of new songs. One new song was called "Hip Replacement" and seemed to feature the lyric:

"Hip Replacement
Down in the basement"

We had tickertape at the end and a load of girls on the stage in Santa costumes, but I couldn't help but think I'd have been better off watching the Stoned Roses playing at the Zodiac. Not a terrible evening by any means, but for a special Xmas gig organised by the band in their home town, it was all a bit lacklustre and I couldn't help but think they were going through the motions.

(Although, to be fair, the one two punch of "Richard III" and "Caught By The Fuzz" - inspired by an incident that happened about 100 yards down the Cowley Road - sounded great)