...nor any drop to drink 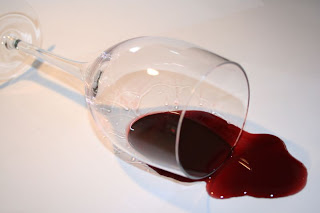 Ten days ago, I went to dinner with a few friends round at someone's house. It wasn't a formal thing, but we had a nice joint of roast lamb, a good old chinwag and drank wine. A lot of wine. We started on the champagne, and although the champagne kept on coming throughout the night, at some point we also started on the red and I ended up with two glasses on the go. It was one of those nights and it was a lot of fun.

Inevitably, when I woke up on Sunday morning, I felt a little bit groggy. It wasn't one of those hangovers that completely knock you for six and give you a huge pounding headache and all the rest of it - I hadn't been that drunk - but it was one of those ones where you just feel a touch wonky; off-centre somehow.  I tried dozing for a while, but after a bit, I just gave up and got out of bed to go for a swim. It was as I got up that I noticed that my arms and shoulders were feeling particularly weak. Although the symptoms of my multiple sclerosis affect my whole body, I seem to have been particularly affected in my upper body, and over the last few years I have suffered a degree of muscle wastage across my arms and shoulders and they have become weaker (it's a bit chicken and egg this: the MS leads to weakness, and the weakness leads to muscle wastage...which leads to more weakness). I've noticed in the past that I tend to feel my symptoms a bit more heavily the morning after I've been drinking, and I sometimes have to be quite careful to "feel" the floor as I put my feet down when I get out of bed the morning after the night before. On the whole, it's something that I've tried not to think about too much, but this particular Sunday morning, the conclusion seemed inescapable: drinking seemed to have flared up my MS symptoms.

I did some googling and found out that other people have felt like this too, with red wine apparently being a particular culprit. Some people found it so bad that they had just given up drinking altogether. I like a drink, and I suppose you roll the dice with a hangover every time you have a few, but this was something else. I had plenty of time to think about it as it took a few days for the feeling in my arms and shoulders to return to something approaching normal. Suddenly, the decisions I make about how much alcohol I drink had become more complicated.... a hangover is one thing, but a flare up of these other symptoms? That's maybe something else altogether.

I wasn't planning to stop drinking, but I haven't actually had an alcoholic drink since that night. In the normal course of events, most weeks I will have the odd glass of wine or bottle of beer with my dinner, a few at the pub on a Wednesday night at the quiz, and a few more at the weekend. For the last ten days, I just haven't. It's not actually been very difficult at all, and I've suddenly learned that I sometimes feel that groggy and unsteady first thing in the morning when I'm stone cold sober. On the whole, I'm not sure that's a very nice thought.

This weekend, I decided that I wanted to drink some beer, but I was on something of a no-alcohol roll, and I didn't want to break my momentum, so I popped out for some non-alcoholic beer. My dad used to buy us Kaliber (0.05%) when I was a teenager, but it's not really an item that has featured very highly on my shopping list since those days. Why would it? What's the point? I bought some Becks Blue (0.05%) and was very pleasantly surprised to discover that not only did it taste like beer, but it also tasted very specifically like Becks. I drank four bottles, and it was pretty nice to remain clear-minded throughout and to wake up on Sunday morning all bright-eyed and bushy-tailed. Well, as much as I ever do.

Carried away, I decided to try some different flavours, and at the supermarket on Sunday afternoon, I picked up a pack of Cobra Zero (0.00%) and a couple of packs of Bavaria Malt (0.00%). Mistake. The Cobra was absolutely foul. Undrinkable. Not only did it not taste of beer, but it was actively unpleasant. The Bavaria Malt was a bit better, but it still had a very strange aftertaste that meant I couldn't finish the bottle. Horrible. Mindful of a Christmas party I'm attending at the weekend, I thought I'd try and find some more Becks Blue to take with me and popped into Asda. They had some Becks, but they also had some Carlsberg Low Alcohol (0.5% - steady now....). Well, whilst not actively unpleasant, the Carlsberg tasted like a watery shandy, and it's not something I'd really go out of my way to drink over, say, a glass of water.

It's funny how I was totally prepared to risk hangovers with my boozing, but when my MS is factored into the equation, I'm suddenly a bit more reticent. I'm not really sure why. I suppose it's that you know where you are with a hangover, don't you? I'm not off the booze forever, and in fact I'm planning to drink a few proper drinks at the weekend... it's just that it's not such a simple decision any more. Perhaps in time it will become just another possible consequence of a night out, but for now I'm keen to not be reminded of my limitations, thanks very much.
Posted by swisslet at 21:03