And he carries the reminder of every glove that laid him down.... 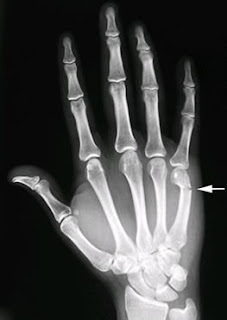 Some six weeks ago, I took a bang on my hand whilst playing football. It hurt, and given my track record of breaking digits playing this stupid game, I was initially a bit concerned. However, the unattractive prospect of several hours sat in A&E waiting for an X-Ray deterred me from taking a trip to the hospital, so I took some ibruprofen and decided to sit it out. As the pain subsided a little over the following few days, I thought it was probably all going to be okay.  Another minor ailment to add to the pile caused by playing a game I've never really been any good at and should probably retire from before I really hurt myself....

I did ask a doctor about it when I went for my flu jabs a few days later, but she advised that it could well be deep tissue bruising and that I wait to see if it was still bothering me in a couple of weeks time before taking things any further.  Fair enough.

Two weeks passed, and although all visible signs of bruising were now gone, the pain in my hand was, if anything, getting slightly worse. The damaged area was on the outside of my right hand, just below the bottom knuckle of my little finger. The knuckle itself looked okay, but I appeared to be developing a lump on the side of my hand. Hmmm. Perhaps I should get this looked at properly after all.

I made an appointment to see the doctor, with the expecation that I would probably be given a slip to take to the X-Ray department at the hospital. No chance. The doctor I saw this time - the one I'm registered with, as it happens - hardly looked at me before throwing me out and telling me to come back in six weeks. I was barely in his office for a minute before I was walking back out to my car wondering why I'd bothered. This guy has something of a reputation for this, it's true, but I'd naively expected better this time around. Certainly better than the short shrift he gave me, anyway.  I thought that doctors are supposed to be encouraging people to come and see them, especially men, and not making them feel like their trip has been a total waste of everybody's time.  If many of them are like this, I'd be surprised if anyone went to go and see them at all.  Perhaps that's what he wants?

As the weeks wore on, my hand continued to bother me, becoming stiffer and more sore with every passing day.  I started to become acutely conscious that I was going skiing towards the end of January and then onto Hong Kong, Australia and New Zealand. If there was a problem with my hand that required treatment, then that doctor's attitude may have delayed treatment by several weeks and was now potentially going to cause me real problems.... but at the same time, I was reluctant to make another appointment and to get it looked at again as I didn't want to waste anybody's time...Perhaps I really was just making a big deal out of nothing?  Even if there was something wrong, by now I was almost afraid that they could do something to help and had visions of being put into plaster. It seemed unlikely, but a plastercast would be a nightmare: stopping me from strapping on a pair of skis and presumably necessitating a trip to a doctor somewhere in the southern hemisphere (they have doctors there, right??)

As a last resort, I decided to ask my dad when I was at home for Christmas. My dad's a doctor and so in theory an excellent person to ask, but in practice he can be pretty unsympathetic himself when it comes to his own family's minor ailments. I can't say I blame him really: when you spend your days examining sick people, the last thing you want when you get home is to be presented with a load more.... and, to be fair, when I've been really ill, he's always been fantastic. In fact, it's a pretty good rule of thumb that if my father is concerned about you, then you know you've really got something to worry about.

As it happens, he was great......he had a good look at my hand and pronounced that there was some significant deformity below the joint and that it was likely fractured. There's nothing much that can be done, but he suggested that I tape up my hand for a few weeks to prevent movement of the joint and to promote healing. He also told me that this kind of break is -- brilliantly -- called a "Boxer's Fracture", and now it's all taped up, I look like I've been in a fight over Christmas.

Just don't tell anybody that I received the injury when the ball bounced down off my chin when I was performingly as incompetently as ever in goal and ricocheted down onto the my hand.  Not quite as a manly as a fight, I'm sure you'll agree....

Given that I also appear to have cracked a toe over the holiday period, it seems that I am surprisingly breakable at the moment. Perhaps I'd best retire to bed and stay there until I board the plane at the end of January?

Sorry to go on about this, but I still need your 5 votes for the Earworms of the Year 2009 countdown.  At the moment it looks as though Lady Gaga is all over this, although her vote seems split across several songs. If you feel strongly either way about this, then you need to email me your votes without delay!

Details are here.
Posted by swisslet at 18:01