The last day at work is finally done.

I'd say that I managed to get away entirely unscathed, but as I somehow managed to dislocate my left thumb before leaving, that wouldn't really be accurate (.....don't ask).  In the end I skulked off at about 5pm as my increasingly impatient wife tapped her foot beside me as I sat at my desk, firing off those last few emails and setting that gloriously satisfying voicemail message ("...if you can wait until September, then please leave your message after the tone.  Otherwise please bugger off."  Or words to that effect, anyway).

I would probably have stayed longer, but we had an important mission to complete: we had to take our cat down to her country estate, where my mum and dad will be looking after her for the next few months.  They have a nice, big garden that opens out onto fields, and they've been cultivating the birdlife with feeders and tables and the like for several years... so I have a feeling that she's going to be just fine.  In fact, I'm pretty sure that we'll miss her far more than she misses us. 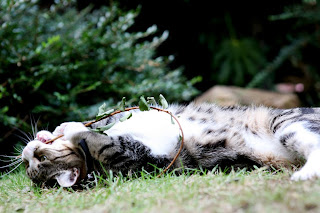 Once she gets used to my mum and dad's geriatric, almost blind and pretty much deaf dog, anyway..... She's the apple of our eye, and she has known something was up for a few days now, so getting her into her travelling box was a bit of pantomime.  In the car, she also vigorously voiced her dislike of Beyonce's "All The Single Ladies" by miaowling loudly three times and promptly throwing up, although I suppose that could also have been the winding country roads making her feel a touch travelsick and not just her opinion of Mrs. Z.....  We stayed the night, and by this morning she seemed to have largely realised that the dog was nothing much to worry about and that she was going to be fine.  She'd elbowed her way through to eat the dog's breakfast, anyway. 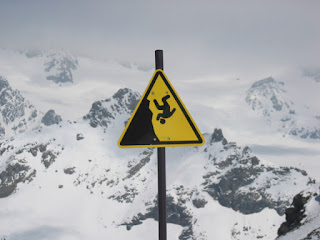 Well, in a minute we're off down to stay with some friends near Gatwick before heading out to Austria tomorrow to go skiing for a week.  Given my current track record with injuries (as well as that dislocated thumb, I also currently have a fractured hand and a broken toe), let's hope that I'm still all in one piece when I get on that flight for Hong Kong in 10 days time, eh?

I wonder how long it will take to hit me that I'm not going to be working now until September.  It took C. a good 10 days to decompress after she finished back in December, so I reckon it will hit me on the Monday after we get back from skiing.  We booked this holiday some eleven months ago, so really it's going to feel just like a normal short break away from the office.  I think it's going to be the Monday when I would have been going back to work that I'm really going to start to feel free.

Just the thought of it is making me smile.

Sorry about that.
Posted by swisslet at 15:44