somewhere cold and caked in snow.... 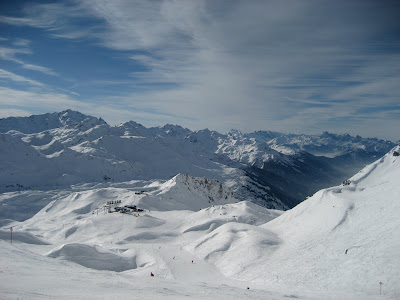 I suppose I should apologise really.  Most skiing photos look exactly the same: if you've ever seen me standing in my ski gear in front of one set of snowy mountains, then you really don't need to see any more.  Given that I haven't changed my skiing jacket in 5 years and the only noticeable change in the last three or four trips is the fact that I've started wearing a helmet, then I might just as well have selected a random selection of photos from our recent trips to Courchevel, Sestriere, La Rosiere, Val D'Isere or Canada.

Well, for what it's worth, these photos were taken last week in the Lech and St Anton ski areas in the Austrian Alps. 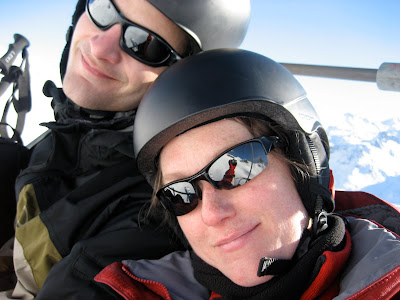 Well, apart from this one, which I took last year in Val D'Isere.... but anyway..... it's us in our ski gear on a chairlift in some snowy mountains somewhere.  Same difference.  Do me a favour and, for the purposes of this update, pretend that it was taken in Austria too.

I love Austria.  We got married in Vienna a couple of years ago and we have some very good Austrian friends, so I have little but fond memories of the place.  If a country's greatness was judged on the volume and quality of their cakes, then Austria would truly be a giant amongst nation states.  How can you not love a country that has a special breakfast cake?  Whether it's sachatorte, apfelstrudel, topfenstrudel, mohnstrudel, germknödel, kaiserschmarrn... or any other of their delicious and seemingly endless varieties of sweet treats, I doubt that anyone ever went longer than about two hours in Austria without a pastry product or a cake of some type.  Or if they did, perhaps they got disowned.

Food aside - and I won't even go into the details of the schitzels, goulash soups, rindsuppe and other delights I consumed on the slopes - I actually learned to ski in Austria on a school trip back in 1987, but it was some 13 years before I ever went skiing again, and this is my first trip back to the Austrian Alps since. 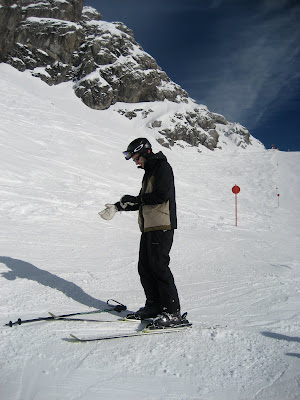 For the last five years now, we've gone as part of a larger group of friends.  The origins of the group seem lost in the mists of time, but I think they started out as a university ski club, and have evolved from there as friends bring friends who bring other friends.  This year was the first time that not a single founding member of the group was there, but there were still eighteen of us and we were able to have a whole chalet to ourselves.  I'm sure it's changed over the years, but although we like a drop of red wine with our dinner, we're not really the kind of group who really go hard at the apres ski.  Even in the time we've been going, we've never really partied hard out in the resort.  Instead, we tend to drink copious amounts of wine in the chalet and try our damndest to make the first lift of the morning to make some tracks in the freshly bashed pistes.  As relative late-comers to the group, although we know everyone and have been skiing with most several times, we're not central members of the group and aren't part of the "core".  Actually, I quite like the fact that we're not in the nucleus of the group: it means that we can sort of fade into the background and just enjoy our trip and the skiing.  It's nice.  And we won the quiz.  Again.

The weather was a touch variable.  I suppose ideally you want to have a huge great dump of snow every night whilst you sleep and then ski under clear blue skies.  Unfortunately it doesn't often work out like that.  Although we had a couple of days of beautiful sunshine, most of the week was spent skiing in very flat light as snow fell hard onto the mountains.  This did mean that we were lucky enough to ski in powdery conditions that were nearly as good as those I saw in Canada last year, but the downside is that you have to wrap up really warm and sometimes struggle to make out any contours in the snow at all, meaning that you must ski cautiously or risk wiping out on an unseen undulation.

As I'm not the kind of skiier who gets their kicks from the speed of their descent off the mountain, this suited me okay.  Far better to have good snow than icy snow, or even no snow at all, if you ask me.... but it doesn't suit everyone, and some people were noticeably slower out of the chalet in the morning and quicker back in the afternoon than others.  Still, it's supposed to be a holiday, isn't it?  No point flogging yourself.  Far better to get back in good time to use the chalet's little sauna and to make snow angels out the back to cool off.  Apparently Ian Hislop and Stuart Rose stayed in this same chalet the week before we were there.  It's nice enough -- one of the nicest I've stayed in -- but surely that's slumming it a little for them?  They were nice enough, apparently, if as demanding as you might expect from people who usually stay in a better class of establishment.  It was one of their party's 50th birthdays, and they'd stayed in the same chalet some 20-odd years before and were making a return trip... this time bringing their own champagne.  Fair enough, I suppose, but you'd think they might have managed a tip for the (excellent) chalet boys. 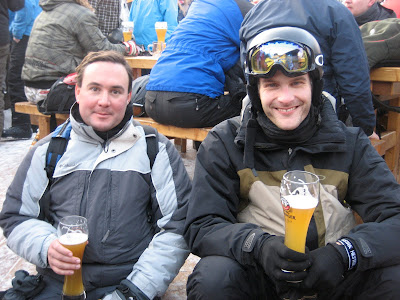 As you might expect from a country so close to Germany, the beer in Austria is excellent.  Unfortunately, that proximity to Germany also means that they are uncommonly attached to Jive Bunny type, Europop oom-pah-pah mega remixes.  As well as the inevitable DJ Otzi and the ubiquitous Lady Gaga, every bar seemed to be pumping out strange cover versions of songs like "Sweet Caroline", "I Will Survive" and "Country Roads", all done in the europop style.  This kind of music causes me physical pain, but everyone else in the bar seemed to go into a strange trance where they would almost unconsciously nod their head and tap their feet along to this rubbish.... including, much to my disgust, everyone that I was with (with the honourable exception of Damon, pictured with me above and equally trapped in hell).

It was an excellent week.  The trip was booked something like 11 months ago, long before we arranged our 8 months off from work, so it felt less like the start of a career break and more like a week's holiday away from work, but it was none the less welcome for that.  We fly to Hong Kong on Wednesday evening, so the next couple of days are going to be spent emptying one set of bags, running the washing machine and then packing another set of bags, but you won't hear me complaining too hard when I know that I could easily be sitting at my desk in the office instead.....

1) Heated chairlifts are an absolutely brilliant idea and should be compulsory everywhere.  On a cold day - and let's be honest, it should be cold on a skiing holiday, should't it? - there are few things as pleasing as sitting down on a long chairlift to the windblasted top of a mountain to discover that it is slightly heated.  Chairlifts are often slow enough that you can start to get cold, and this nipped the whole process in the bud.  It's probably not very carbon friendly, but it was very welcome.  The only other way of heating the seat on a chairlift is a whole lot less appealing, especially if you've got the plastic top down.... no one likes that kind of seat warmer, eh?

2) One of our party works in cabin crew for the airline that flew us out.  I sat next to her on the way home, and it was a real eye-opener.  The steward looking after us was telling us how he had got in from work at 19:20 the day before and had gone straight out for 19:50, not getting to bed before 01:00 and then getting up for work at 04:00.  The captain had been out too, apparently..... Still, they looked after us fantasically well, and sitting next to one of their colleagues meant that I was plyed with free drinks and snacks all the way home, which was brilliant.

3) In spite of all the trouble I went to to ensure that the airlines and airport security all knew that I would be travelling through the airport with a syringe and needles in my hand luggage (I can't check it in with my baggage because I can't be sure that the liquid in the syringe won't freeze in the hold), it turns out that I probably needn't have bothered.... they just waved me straight through and really couldn't have cared less, nevermind insisting on seeing the letter from my neurologist.  This is a good thing.  This is the first time I've carried syringes with me on a flight, and I am delighted that it seems to be no big deal.  Long may it continue to remain so, especially as I will have a whole lot more syringes with me on our next trip.