tie another one to the racks, baby....

About seven months after I first declared my medical condition to them, the DVLA finally got around to sending me my new Driving Licence this week. Better late than never, I thought, although having given up on this months ago and forked out £20 to have a replacement for my lost paper licence sent to me before we go travelling, the irony that this has now turned up is not lost on me.

I am legally obliged to declare my multiple sclerosis to the DVLA as soon as I am diagnosed. As I've discovered, that definitive diagnosis can be somewhat elusive, so I ended up waiting until after the results of my lumbar puncture before letting them know. I can entirely understand why medical conditions like this need to be disclosed. After all, MS could potentially mean that you aren't fit enough to drive safely...... it can rob you of your eyesight, it can take away your strength and give you uncontrollable spasms, it can affect your ability to think straight.

...I think I'll stop there before I depress myself.  The point is that MS is a condition that has a wide-spectrum of symptoms and impacts each person differently, although at its worst it can be extremely debilitating.

Anyway. I'm lucky enough not to be significantly affected by my condition, but I still had no worries at all about fulfilling my obligation to declare it to the DVLA. The form was an absolute pig to fill in too. For some reason, the DVLA feel the need to have an almost unbelievable level of detail about my condition: what was the exact date I first consulted a GP about my symptoms?
When did I first see a neurologist?
When exactly was I diagnosed?
What precisely are my symptoms?
When did I last see my GP about it?
When did I last see my neurologist?
When is my next appointment?

Details of my symptoms and rough timings I understand... but frankly this form was an awful lot more difficult to fill in than the one they gave me when I claimed on my critical illness insurance and received a payout equating to approximately three year's salary... Given that they have to write to my neurologist anyway to see if I'm fit to drive, what exactly are they planning to do with all this information?

It certainly took them long enough to process it. Seven months with not a word to know that they had received my form ok. In fact, the first I really knew that they had it was when I went to request that replacement paper licence online, and when I said that I had a medical condition, the form said "What, as well as your MS?"

Apparently the delay was due to the DVLA waiting for a response from my neurologist, but they got there in the end.

Superficially, the licence looks exactly the same as the old one, but a closer examination revealed two key changes: instead of expiring when I reach the age of 70 in 2044, my new licence expires in three years time, at which point my condition will be reviewed again. Fine. MS is a progressive condition, so although the legal obligation remains with me to report any changes, it makes sense to have a periodic check (even if having a short-dated driving licence does rather reveal to people that you have a problem like this, but presumably they could check up on me with my neurologist anyway, without needing to short date my licence?). Still, I was expecting that change.  The other change, however, was somewhat less expected: I've had the number of categories of vehicle I am entitled to drive stripped right back. Where I could apparently drive minibuses, lorries and all kinds of other exciting sounding vehicles, now my licence only entitles me to drive vehicles in category B: cars. As I'm hoping to rent one in Australia and New Zealand, I was a bit worried about campervans, but apparently the DVLA category B extends to multiple seated vehicles up to 3500kg, which happily includes all but the largest Winnebago.

I'm hardly likely to drive a lorry between 3500 and 7500 kg in the near future, but somehow having my rights stripped back as a result of my condition stung a little. It's only a small thing, I suppose, but it's another thing that has been taken away from me. I'm physically largely unchanged since I was diagnosed with MS, but it's still changed my life in lots of ways. Travelling has got slightly harder, not through any great physical limitations, but in other ways.  I can't really be spontaneous: I have to make sure I have enough Avonex/needles/syringes/sharps bins to last me whilst I'm away; I have to ring ahead to airlines to tell them I'll be bringing needles and syringes through customs as hand luggage; it might be harder for me to get insurance clearance to drive a hired campervan; I may struggle to pass an Australian diving medical and am trying to make special arrangements to see a specialist in Cairns to get the right paperwork so I can get out onto the reef.... I feel much the same as ever, but in lots of little ways my life has been turned upside-down as people see I have MS and feel forced to assume that I could be severely disabled.

.... mind you, having said that, apparently the DVLA has been issuing everyone with driving licences that only allow them to drive category B vehicles since 1997. I only had all that other stuff because of something called "grandfather rights". I can get the other stuff back, subject to filling in another form, but I'll need to have that reviewed every year. Fair enough, I suppose. After all, it's surely no bad thing that the people driving HGVs are subject to regular medical checks, eh? 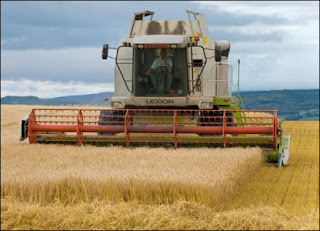 One thing is for certain though: the bastards have well and truly shattered my lifelong dream of driving a combined harvester once and for all though, that's for sure.
Posted by swisslet at 18:56