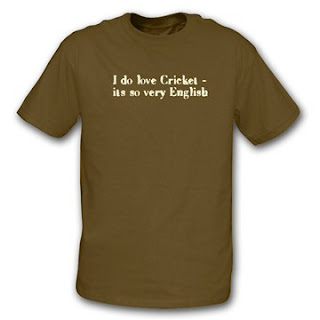 As an English sports fan, I have become sadly accustomed to defeat at the hands of the Australians. Cricket, rugby, football, athletics, hockey, swimming.... well, you name a sport and they've pretty much beaten us at it. Yeah, sure, we have the odd victory -- the 2005 and 2009 Ashes, the Rugby World Cup in 2003 and 2007, the rowing -- but basically the pattern is that we get resoundingly beaten by a nation who just seem to be better than us at every sport ever devised. They are meaner, leaner, faster and more driven to win than we British will ever be.... we're far too diffident to ever match that kind of self-confidence.

Or so I thought.

In Hobart, whilst waiting for my flateye & chips (delicious, by the way), I idly flicked through an Australian sports magazine. It contained an article on the British push for medals at the 2012 games. The first few paragraphs were the predictable laugh at British sport. The author didn't bother to go into detail our long-term failings in rugby, cricket and football, but did say that our pre-Beijing Olympic highlights reel could be set to the theme tune to Benny Hill. List Great British Olympic heros, and after you've named Steve Redgrave and Seb Coe, how long is it before you are forced to mention Eddie the Eagle. Ha bloody ha. Then the tone abruptly changes: after the watershed of the Atlanta Games in 1996, when Britain won a solitary gold medal, we began to take the sport more seriously and, with the help of National Lottery funding, we began to invest in success.... an investment that culminated in Great Britain finishing above Australia in the Beijing Games in 2008, with the equivalent of one billion Australian dollars earmarked for the medal campaign for London 2012.

Not fair, apparently. Although people like Chris Hoy and Victoria Pendleton are clearly outstanding athletes, so the article informed us, didn't people like Tim Brabants only win their events because they could afford the best equipment? Now, obviously this is an unfair criticism, not least because all of these athletes, although they may be well funded, still make enormous sacrifices for their success. Brabants is a good example: as well as training for his gruelling event, he holds down a job in the Queens Medical Centre in Nottingham as a duty doctor.... putting in 100s of hours a week on top of his training. Is his kayak really the only reason for his two medals? No, it's not, and it's unfair to say that it is. Were the Australians in Brabants' race really handicapped by significantly inferior kit? I doubt it.

The article gets worse. Not only is British success being bought, but surely they have also lost something far more important. There is an inscription at Centre Court Wimbledon that quotes Rudyard Kipling's "If", exhorting competitors to treat triumph and disaster the same. In the ruthless pursuit of success at all costs, Britain have forgotten what it means to simply take part and are all the poorer as a result.

Oh spare me. You can laugh at us for being hopelessly disorganised and amateurish at sport, or you can scorn us for our investment in success... but you surely can't do both.

This article is only one journalist's opinion of course, but I really had no idea that the Australians -- a nation that have always struck me as being supremely self-confident, certainly when it comes to sport -- are still quite so insecure in their relationship with Britain.

(* please note that I'm not going to brag about the 2009 Ashes series. We're due in Australia later this year, and we all know what happened after the 2005 successes, right?)

Incidentally, I've been happily wearing the t-shirt above around Tasmania.... even though that missing apostrophe kills me every time....
Posted by swisslet at 02:10