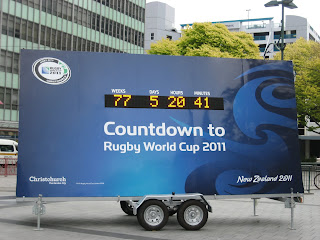 There's an awful lot to admire about New Zealanders.

If you've ever watched "Flight of the Conchords", then you'll already be fully aware of the self-deprecating kiwi sense of humour - especially with regard to their brasher neighbours across the Tasman.  In the main, and certainly in contrast to the average Australian, your average New Zealander seems to be fairly self-effacing.... their country is, after all, quite like Australia except smaller and colder.  As an international state, New Zealand has a relatively tiny population and has no great delusions about its place in the world.

The one massive exception to this rule is rugby union: in New Zealand, rugby is everything and the sense of pride in the massive success of the All Blacks is all pervasive.  The passion for rugby is everywhere: you can be driving through the remotest part of countryside on the South Island, and in the backyard of a tiny farm, you will see a single set of homemade rugby posts where the farmer's kids will practice their kicking and imagine that they are playing in a decisive test match for their beloved All Blacks.  There is nowhere else in the world as passionate about rugby as New Zealand, and it's a pleasure to behold.

.... but on the other hand, their love of rugby shows New Zealanders up at their most insular.  Earlier this week, the Otago Highlanders were playing the Natal Sharks in the Super XIV tournament.  I happened to be in Dunedin, home of the Highlanders, and was amused to see that the local paper printed the matchday programme in full, sponsors notes and all, such was their excitement about the game.  I was interested to know about the Natal side, especially as fat, no-good, sometime England international Andy Goode appeared to be turning out for them.  Could I find a single word written about the visiting team?  No.  I learned that the Highlanders fly-half (or first 5/8, as they try to tell you it should be called here) would not have either of his parents at the game because one was away on business in the North Island and the other had a prior family engagement, but I could not find out a damn thing about the visiting team.  Elsewhere in the paper, there was an article commenting on former All Black captain, Tana Umaga's, return to the game in NZ at the age of 37.  Umaga has returned to a nothing-much team in NZ and the journlist was wondering why he was bothering.  In 2006, the journalist remarked, Umaga had the respect of the whole rugby playing world.  Why didn't he retire then?  Well, leaving aside the issue of how well Umaga may or may not be playing now, what's that?  That in 2006 Umaga had the respect of the whole rugby playing world?  Directly after he was involved in the illegal (and intentional) spear-tackling of British and Irish Lions captain Brian O'Driscoll in the opening seconds of the first test in 2005?  A tackle that led to a long-term injury for O'Driscoll and the widespread opprobrium of the rugby playing world outside New Zealand?  Respect of the rugby playing world?  Only if you think that world starts and ends in New Zealand... Oh, hang on, that's exactly what he means.

This insularity becomes clear further on in the article, when the journalist talks about how rugby is now such a physical sport that a player is a veteran at 25 and over the hill at 30.  An All Black like Aaron Mauger, he says, recognised this physical toll and decided to take a couple of years out of the game by playing in Europe.  What?  An All Black goes to play professional rugby in Europe and that's considered time off?  If it doesn't happen in NZ then it doesn't happen?  Get over yourselves!  I saw a t-shirt here saying that "There are no tears on the rugby pitch (unless you're Australian)".  Um.... but aren't All Blacks seen crying on the rugby field far more often than the double-world cup winning Wallabies?

As the countdown clock in Cathedral Square in Christchurch shows, New Zealand is very much looking forward to the Rugby World Cup they will be hosting in 2011.  Given that the world's most successful rugby team hasn't won the tournament since they hosted the very first one, back in the amateur days of 1987, they seem to be hanging an awful lot of their self-esteem upon winning the next one.  They're still harping on about their old world cup defeats too, whining about the refereeing in the game against the French in 2007 and moaning that the Nelson Mandela film, "Invictus", that centres on the 1995 World Cup, makes no mention to the alleged poisoning of the All Black team before the final against South Africa.

It's this kind of attitude that makes me hope that they choke in the next world cup too.....

Compare and contrast this attitude that Kiwis seem to have to their rugby team with the one they have with their cricket team: ranked 6th in the world, the Black Caps are currently being spanked by the Australians in the first test in Wellington, but the players seem both humble and relaxed..... they give a remarkable amount of their time to a local TV cricket show and seem like a genuinely nice bunch of guys.  I'm sure that the rugby players are all very nice and humble too, but the key difference, of course, is that no one expects anything much from the cricket team, and they can exhibit far more typical kiwi traits of humiity and humour than their rugby playing counterparts.

I reckon the French have a good chance in 2011, for what that's worth.  One thing's for sure: I reckon the kiwis will have put too much pressure upon themselves to win, and that will be a key reason why they will fall short.... prompting an intense four year period of national mourning, I'm sure.