ticket to the tropics.... 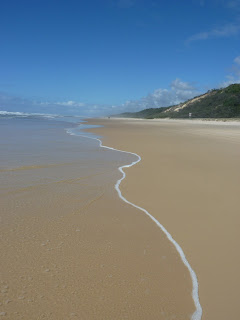 With the diving on the reef out of the way, we now had the small matter of nine days and 1700km between us and our flight out of Brisbane to Christchurch in New Zealand. The whole aim of our trip to Tropical North Queensland had been to learn how to dive, and we were always going to play the rest of it by ear... but here it was and now we really had to work out what the hell we were going to do with our time.

One decision was easy: we’d enjoyed our campervan on the Great Ocean Road so much that it was a no-brainer to rent another one to take us down the Queensland coast. Although we'd paid for the same type of van that we had in southern Australia, this time around we were given a somewhat more muscular 4x4 version at no extra cost.  I almost felt manly up there behind the wheel of that monster.... almost..... Of course, there’s a reason that this is called Tropical North Queensland, as we were to discover on our first night out of Cairns in a campsite in Townsville, some 370km down the coast.... it’s extremely hot and humid around here, especially at this time of year. You tend not to notice this sort of thing when you’re in an air-conditioned hotel room or on a boat out on the ocean, but in an unpowered campervan..... In southern Australia, we’d got used to the camper turning from an oven to a fridge in the course of about an hour as the temperature dropped at night, and we’d been grateful for our blankets. In Queensland, we had quite a different problem: shutting the doors and windows on the van was clearly not an option, but the heat and humidity brings with it a vast array of biting insects. This is where I get lucky. Although I get plenty of bites, I would estimate for every one that I get, C. gets about 20. Over the course of the last week or so, the poor girl has been eaten alive. Even after we managed to get hold of a mosquito net, we were never able to keep the sandflies and midges at bay. It’s been carnage. 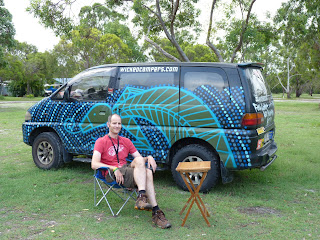 Biting insects aside, it’s been another wonderful few days. Our first stop along the way was easy, We flogged it for four hours past the banana plantations alongside the Bruce Highway out of Cairns to get down to Townsville for one simple reason: the Yongala. As soon as they learned that we were driving south, all of the Pro-Dive guys on our boat told us that we simply had to stop to dive the Yongala. The SS Yongala sank in 1911 with the loss of all 122 hands. The wreck wasn’t discovered until 1947, and wasn’t dived until 1958, by which point it had become something of an oasis for marine life in the desert of the surrounding sandy ocean floor. The wreck is almost completely intact and sits at a depth of between 16m and 30m in the ocean, making it eminently diveable. As it’s protected by Australian law as a historic site and is effectively a gravesite, you’re not allowed to penetrate the remains of the ship themselves, but you are able to get down and have a look at the ship and the incredibly diverse marine life that now surrounds it.

Our diving instructors made great play on the fact that the wreck is home to several Bull sharks, a species known to be big, curious, fearless and unpredictable, but they also told us that we should definitely go and have a look. As we now categorically had the diving bug, what else were we going to do? In the end, our trip out to the wreck taught me two things:

1) How lucky we were with conditions out on the Great Barrier Reef. There we had visibility of 20m and almost no currents. On the Yongala, we were forced to make do with visibility of 5m and some really strong currents. Having never dived in a current before, this took quite some getting used to, and meant that we spent a great deal of energy and air just trying to stay alongside the wreck. The poor visibility meant that, although we saw plenty of the ship, we didn’t see as much as we might have done. Once back on the boat after the second of our two dives, the crew told us that the currents probably meant that the Bull sharks were sheltering in lee of the boat, but just out of sight. I found that thought strangely unsettling

2) Although the company that took us out to the wreck was perfectly acceptable, it drove home how lucky we had been with Pro-Dive in Cairns, where everything was just that little bit better, from the equipment down to the guys supervising the dive.

In all, I thought it was a great day. If we go back when we’re a little more experienced and when conditions are a little easier, I’m sure we’d get more out of it.... but as things stood, it was still pretty amazing to swim around a shipwreck like that.

After Townsville, we drove on down through Queensland, pausing at Bowen before heading on down to Airlie Beach. Bowen was funny: it’s essentially a small provincial town, but ever since the film “Australia” was partially filmed there, they seem to have become starstruck. There’s a huge watercooler on the edge of town painted with the slogan “Bowenwood”, and every shop seems to have a story to tell about “Hugh and Nic” stopping to buy their sausage rolls, or somesuch. Still, I did have a nice sandwich there (chicken and avocado), so.... 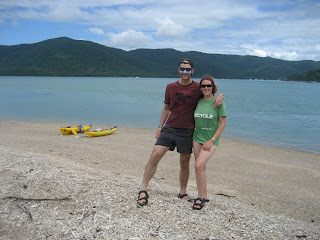 Airlie Beach is a different kettle of fish altogether. It’s the gateway to the Whitsunday Islands, and as such is very firmly a stop on the backpacker circuit. Most people stop here for a cruise around the 74 Islands, but as we were already chasing the clock, we only stopped to spend half a day Sea Kayaking. It’s not much time, but it was long enough to get a real feel for quite how beautiful a part of the world this is, and we got to paddle with turtles and stingrays, looking up at the sea eagles as they soared above the crystal clear waters. Our guide’s last job was in the New Zealand tourist office, so we were able to pick up lots of useful hints about the next stop in our trip. Not for the first time, we realised that we are going to have to come back to Queensland in the winter, when apparently the weather is wonderful and we’ll be able to see the wildlife at its best, including whales. One day, perhaps.

The next couple of days were a blur of driving down the Bruce Highway, watching the scenery slowly change as we moved on south. We stopped overnight at Marlborough, but were working our way towards Gympie where we had arranged to meet up with some friends. I say “friends”, but actually I’d only ever really encountered Deb via the Bookcrossing website back in about 2004. We’d exchanged a few books and seemed to get on well, and that seemed like enough of an excuse to get out of the camper for the night and to spend some time in a real bed with some real people. In the end, I was absolutely delighted that we stopped at Margaritaville to meet Deb, Jaimie, their two dogs, their chooks, their guinea fowl and their peacock. It poured with rain the whole time we were there, but the welcome was warm and it was a real treat to be able to share Deb’s birthday meal on the Saturday night and to then be treated to barbecued bacon and eggs for my birthday on the Sunday morning. It was a lovely 24 hours, and I really can’t begin to thank them enough for their hospitality. We’ll definitely be coming back here next time we’re in Queensland (that kayaking trip sounded good), but in the meantime, if you ever find yourselves in Nottingham....

Next up was Rainbow Beach and on to Fraser Island. Luckily for us, by the time we started travelling on Sunday afternoon, the weather was easing up and the roads that had been closed were now all open. By the time we reached the coast, you wouldn’t know it had been raining at all.... apart from the cloud of biting insects, that is.

Time meant that we didn’t really have all that long to explore the island, so we booked onto a two day, one night tour. The island is a UNESCO world heritage site, but as a sand island, the only way around is by 4X4 vehicles. Lots of people rent their own trucks to carry them around the island, but as I’ve never driven on sand before, I didn’t fancy that and decided to let someone else – a professional, no less - do the hard work. I can’t say that I’m sorry we did, either. It’s tough driving over there, either on the roads up into the rainforests or on 75 mile beach as you race against the tide to make your ferry. Anyway, it’s a lovely spot. We saw plenty of dingos, we swam in beautiful Lake Mackenzie, a freshwater lake perched some 80m above sealevel with the softest, clearest water and the most perfect white beaches, we climbed Indian Head to peer into the ocean to see if we could see any of the breeding colony of Tiger sharks, we cooled off in a freshwater creek (the sharks and currents make swimming in the ocean impossible), we walked in the rainforest, we drove along 75 mile beach and admired the wreck of the SS Maheno on the sands....... 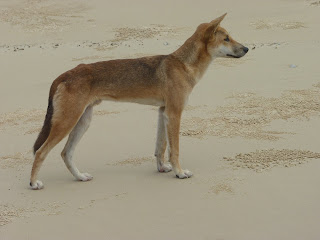 I’m pretty sure that the best way to see the island is to spend a week there, camping and walking across it. We only had time for a whistlestop tour, and we spent much of that time sharing the places we stopped at with school parties and backpackers. Even so, it was a pretty cool place. Another world heritage site ticked off the list, and another reason to return to Queensland. We were very lucky with the weather too.... given the rains of 24 hours previously, we had nothing but sunshine all the time we were there. It’s a beautiful spot, and it’s actually hard to believe that the Australian government is so relaxed about letting people hire 4x4s and drive themselves around this island. That can’t be doing the environment on a sand island much good, eh? Still, it’s a lovely spot. 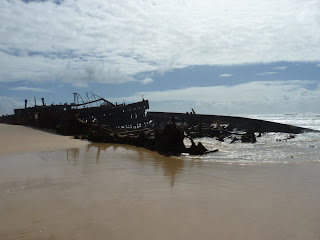 All that remained to us after that (and a haircut) was to flog the remaining 250km or so down to Brisbane. In all we did something like 2000km down the Queensland coast, and the time just flew by. Brisbane seems like a nice spot, a city with a proper metropolitan feel to it like Melbourne, but to be honest all I’ve really got the energy for is to have a quiet drink and to get ready for our flight out to New Zealand. The last month in Australia has been absolutely fantastic, and we seem to have managed to cram so much in that it feels like we’ve been here for a lot longer. Now though, it’s time to get ready for a somewhat colder climate and an almost complete change of scenery. South Island New Zealand, here we come.......
Posted by swisslet at 12:11