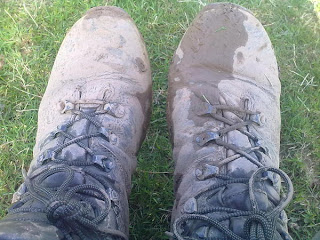 I can’t let the day pass without offering a quick word or two of congratulations to my younger brother who today completes a thirteen day walk of Offa’s Dyke. The Dyke was built by Offa, King of Mercia from 757 to 796 A.D to try and create a boundary between his kingdom and the independent Welsh kingdoms; it’s 177 miles of trail winding across the Welsh and English borders from Prestatyn on the North Wales coast to Chepstow on the Severn Estuary, so it’s no mean feat (no pun intended) to walk it-- especially when you’re carrying a full pack and are camping along the way. My brother’s been walking in the company of his dog and a friend in order to raise money for the Multiple Sclerosis Society, and they have so far raised a little over three thousand pounds.

“About a year ago, after several years of having symptoms, a family member was officially diagnosed with Multiple Sclerosis (MS). Like most people I was ignorant of what MS is, so when I heard the news I did some research.

Now bear with me, as I am certainly no expert, but basically MS is an autoimmune disorder affecting the central nervous system, caused by the immune system attacking the protective sheath surrounding nerve fibres. MS is unpredictable, and symptoms vary from person to person, but can include problems with balance, fatigue, numbness, visual problems and muscle stiffness or spasms, and in some cases can lead to severe and permanent disability. MS can be a difficult lengthy process to diagnose, but it is the most common disabling neurological condition affecting young adults – around 100,000 people in the UK have the condition. It is complex and unpredictable – there is no cure, and treatments that are available are effective in only certain cases for some of the time.

After doing this research, and talking to people, it has moved me just how many people’s lives have been affected by MS – I have discovered that something I hardly knew anything about is all around me.”

I haven’t spoken to him about this or about my MS at all really, but you’d have to be made of stone to read that and not feel something.

Thanks Phil. A truly magnificent effort and I’m touched.

....given that our flight home on Sunday evening is likely to be cancelled as a result of the ash cloud from the eruption in Iceland, I may be forced to attempt a walk of my own. It’s the small matter of some 5,260 miles between San Francisco and Nottingham, so I imagine it may take me a little longer than thirteen days.
Posted by swisslet at 18:17