you should have known by now you were on my list...

Well, before we head off on the next leg of our trip, I thought it was high time we had a pointless list of some of the things we've seen so far.  With that in mind, I've had a bit of a think about our time in Hong Kong, Australia, New Zealand and San Francisco and I've come up with a list of my highlights.  It goes without saying that we saw some amazing stuff, and much of the list is probably entirely predictable, but I think that the things that I'm really going to remember are some of the more intangible things and are as much about the people I've met as the places I've been.

So, not in any particular order: 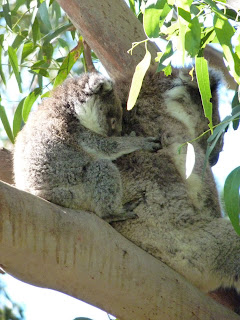 People flock to the 12 Apostles and London Bridge on the Great Ocean Road, of course.... and they're nice enough, but there are several equally splendid places elsewhere along the road with a fraction of the visitors and none of the hustle bustle.  Cape Otway is a great example: it's only a short detour off the road and down a short stretch of unsealed road, but we seemed to have the place virtually to ourselves.  There were koalas in the trees, a beautiful stretch of beach with some rugged coast and a lovely walk in the virtually untouched forest that hugs the cliffs.  We spent a lovely few hours there swimming in the Southern Ocean and walking a stretch of the Ocean Road track, and we pretty much had the place to ourselves.  Stunning spot.  The Grampians are only a relatively short drive up from the end of the Ocean Road, but they're well worth the effort.  Just a few kms from the town of Halls Gap, we stayed in a national park campsite for the grand price of Aus$13. 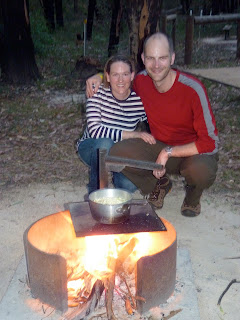 Yes, we had to put up with the bush toilet (probably best if you don't ask) and the bush shower (a bucket on a rope with a shower head attached that you filled with creek water and did the best you could).  It was a great night.  We gathered firewood, cooked over an open fire, tried to dodge the mosquitos and woke up to find a family of kangaroos browsing through the campsite.  Wonderful.

We picked up the half-empty bottle of "Lava" chili sauce from our English neighbours on our first night in our New Zealand campervan at Akaroa.  They were leaving for Australia the next day and were clearing out their van.  From amongst the box of salt and pepper and olive oil and things like that, I picked out the hot sauce, and it turned out to be an inspired choice: fiery, smoky and delicious, adding a real boost to pretty much every bit of food we made, whether that be noodles, soup or lunchtime sandwiches.  We soon ran out, but we couldn't find the stuff anywhere, and the habenero and kiwi fruit sauce we did find was nice but just wasn't the same.  As chance would have it, shortly before we made our way to Auckland for our flight out, we found ourselves a stone's throw away from Whangarei Heads and the home of Streaker Hot Sauces.  We were a little ahead of schedule and it looked like a nice drive, so we made the 60km round-trip out to the headland, past lovely views of the ocean and signs warning us to keep dogs on a leash to protect the local Kiwi population.  What we found when we arrived was a family home, with a couple of kids on their Easter Holidays watching "Spider-Man" and their dad chopping wood out the back.  Brent was delighted to see us and thrilled that we had travelled for his humble, homemade chili sauce.  We were delighted because we picked up another couple of bottles and the welcome news that Brent would be more than happy to post us more as and when we needed it.  He also gave us a bottle of his new flavour to try.  Wondering why this is one of my top ten memories?  You need to try the sauce..... 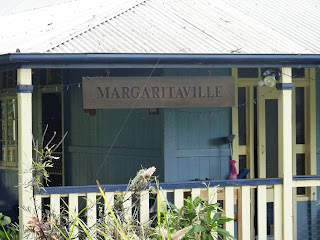 Some of my happiest times whilst away were the ones that I spent with friends.... be that Des and his family in Hong Kong, our distant relatives in Melbourne or an internet acquaintance in Gympie.  Des looked after us like royalty when we were in Hong Kong, and we ate in fine restaurants until I thought I would burst.  The best night though was the one we spent round at his flat, and where I read the Gruffalo with his son, we ate a delicious meal that involved dipping bits and pieces into a broth and we fell asleep in front of England vs Wales at silly o'clock in the morning.  Melbourne was similar.  We were in town for less than 24 hours between landing from Launceston and driving out on the Great Ocean Road, but Boris & Judy still picked us up at the airport and made sure that we went out for a splendid Italian meal with them and then refused point blank to let us pay.  Nice people and a lovely evening. Our day in Gympie was perhaps the best of all.  I'd first "met" Deb via Bookcrossing in about 2003, and when I was last in Australia had posted her a book.  She contacted me out of the blue when I had announced here that we would be travelling around the Southern Hemisphere, and invited us to pop in if we happened to be passing Gympie on our way down Queensland.  It wasn't until we were actually making our way down from Cairns to Brisbane that we actually decided to take her up on her kind offer.  It started raining when we were a few km outside Gympie (on the Sunshine Coast, of course....), and it pretty much didn't stop for the 24 hours we were there, but it didn't matter.  Deb and Jaimie live a little way out of town in a house called "Margaritaville", and we were warmly greeted, fed booze and then taken out to a lovely restaurant in Gympie to help celebrate Deb's birthday.  It was my birthday the following day, and before we left to head on to Rainbow Beach, I was treated to some freshly made coffee and bacon and eggs straight off the BBQ.  Lovely people - Jaimie even booked the hotel for us in Brisbane - and I hope very much to be able to repay the favour if they ever make it over to the UK. 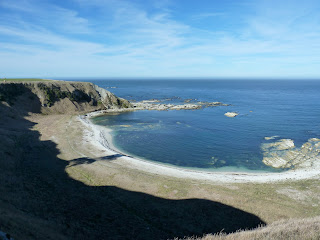 Given that we saw whale, dolphins, seal and albatross in the waters here, perhaps it's no surprise that this makes the list.... and the wildlife is certainly a big part of it, but actually, Kaikoura makes the list by dint of being a lovely little town in a beautiful part of the world.  Kaikoura is a narrow peninsula of land sandwiched between snow capped mountains and deep canyons in the sea.  The wildlife here attracts millions of people a year, but the town itself remains surprisingly unspoilt and we spent a very pleasant three days here whale watching, swimming with dolphins, walking the peninsula and generally chilling out and enjoying our first prolonged spell of sunshine since we'd arrived in South Island New Zealand.  The Whaler is a nice pub too, even if we didn't win the quiz. 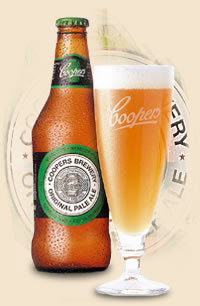 It's a small bar on Rundle Street in Adelaide.  It's an old building, and it used to be a hotel, but it has retained many of its original features, including old wood-fronted chiller cabinets with clasp doors.  The barman and other clientelle were nice, but it's appeal, plain and simple, was the draft Coopers that it sold, all in chilled "Adelaide Pint" sized glasses (425ml.  Inexplicably different from an Imperial Pint, but a civilized serving of beer nonetheless).  They had pale ale, dark ale, stout, clear ale, mild ale.... I'm a pale ale man, but it was delicious and a lovely old pub.  I drank a lot of beer on my travels, but the Cooper was the best and it was served best here. 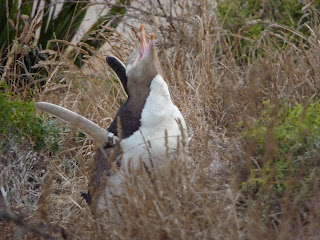 We'd originally planned to spend the day walking around Aoraki / Mount Cook and camping in a DOC campsite near the mountain, but the weather closed in and the prospect of a campsite with no hot water or electricity was rather uninviting, so instead we hot-footed it back across the country towards Dunedin.  We stopped in Oamaru in the pouring rain, but from unpromising beginnings in a rather run-down town that exists primarily to service the surrounding farms, we had a splendid time.  The catalyst was the tour we took from the campsite that took us proudly around the little town, showing us the actually-not-all-that-impressive highlights.... but the real piece de resistance was the town's penguins: both a colony of Yellow Eyed Penguins and the little Blue Penguins.  The Blue Penguins in particular were brilliant.  It was a foul night, but we rolled up to the little purpose-built visitor's centre and sat and watched as these tiny little penguins came home for the night huddled together in little rafts and made the sprint for the beach as they closed on the shore.  I'd seen penguins in passing in Tasmania, but this was the first time that I'd had a proper look at them, and it was magical.  Our tour guide for the evening was bursting with civic pride throughout, and it was infectious. 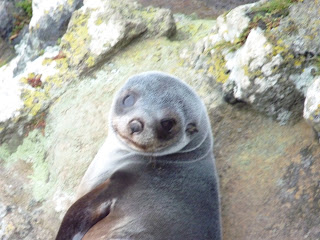 Another one that's all about the wildlife.  In one afternoon I saw Royal Albatross with 3m wingspan soaring above the cliffs and feeding their chicks; I saw a colony of Fur Seal with their pups in a nursery of rock pools on the cliffs; I got up close and personal with some 400kg male sealions from a distance of about 3m (and a solitary female hiding in the grasses on top of the dunes); I watched Yellow Eyed Penguins returning from the sea for the night.  Some of the people we were with moaned like hell throughout, but I thought it was a fantastic way to spend a day. 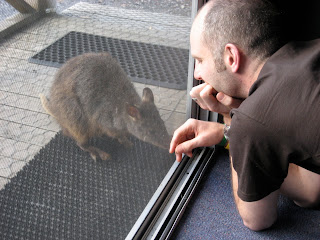 We'd been warned that it rained in the Cradle Mountain National Park on 8 days out of 10, but we struck lucky and had two gorgeous days.  We didn't attempt a summit climb, but we did go on a couple of splendid walks through rugged gorges, round tranquil lakes, past waterfalls and up to stunning viewpoints.  We also went on a night drive where we saw kangaroo, pademelon, wombats, possum and even a glimpse of a Tasmanian Devil.  Best of all, probably, was the little pademelon who liked the smell of the pasta we were cooking in our cabin and asked to come for dinner. 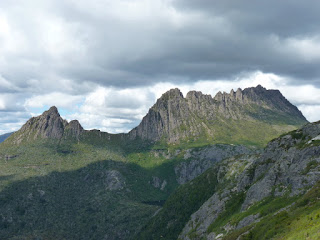 > Diving on the Great Barrier Reef 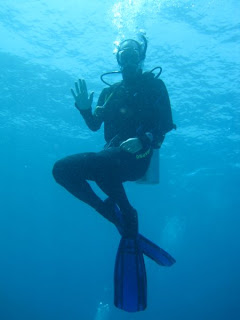 I could easily just say diving generally, but the 2 days we spent in Cairns in the pool and the 3 days out on the reef were just magical.  Our instructor was good, the group was good fun and the diving itself was magical.  I dived with sharks! Just awesome. 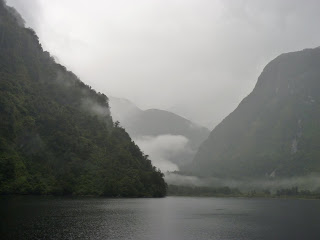 One of the wettest places on earth, but also stunningly beautiful.  Doubtful Sound is a tranquil place of towering cliffs with cascading waterfalls and clinging rainforest, and deep, peaty water.  We spent 24 hours here and it was splendid.  The weather put paid to us kayaking Milford Sound, but the tranquility on Doubtful left a lasting impression on me.  Captain Cook may not have liked the look of it, but I most definitely did.