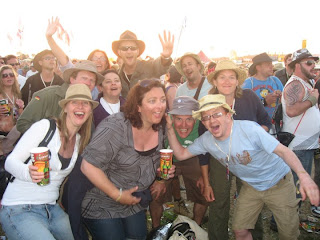 picture via Sarah - grooving to Hot Chip
Well another Glastonbury Festival survived, and predictably enough, Michael Eavis has hailed it as "the best ever".  Well, I know he always says that, but this time he might just be right.  The weather helps, of course.... and apparently this is the first completely dry festival since my first, in 1993.  It was hot, damn hot.  With shade on the site somewhat scarce, it was actually occasionally too hot, and after a late night and a lot of cider, it's not all that funny to be driven out of your tent at 08:30 in the morning because it has become hotter than the sun.  And don't even think about what it does to the toilets.....How British to spend years moaning that the festival has been wet and muddy for years, only to then moan that it's too hot.

Don't let anyone tell you otherwise: it was glorious.  You could sit on the grass; you could spend the whole weekend wearing t-shirts, shorts, sunglasses and sandals; the huge crowds could move freely around the site without worrying about lakes of mud...... it was ace. 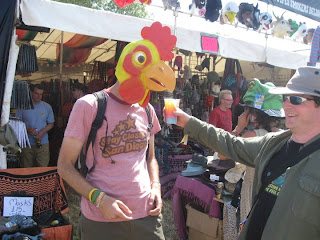 I've found my look -   picture via Sarah
After last year's festival, when I spent 8 hours behind the wheel of my car trying to cover the last 20 miles to the car parks, this year, we were taking no chances and spent Tuesday night in the Glastonbury Travelodge.  After a pretty uneventful journey down the M5, we had plenty of time before dark to have a wander around Glastonbury town centre. 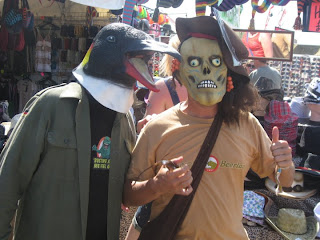 Frighteningly convincing, eh, especially Keith Richards on the right....
There are a few too many crystal and spiritual healing-type shops there for my liking (drawn by the mystical leylines, I should think, and there are lots of old hippies hanging around too), but the town also seemed to be full of posh young girls wearing Jack Wills t-shirts and drunken men walking around barefoot drinking cans of Special Brew.  It's easy to imagine that the locals aren't too fond of the festival.....It's not very rock and roll staying in a Travelodge above a Dominos Pizza and a Subway at the best of times, but I really didn't fancy sleeping in my car in the car parks. 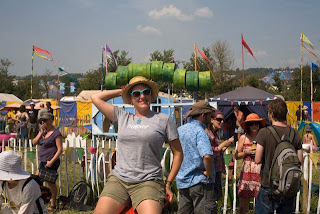 C - balancing some stuff on her head -  photo via Di
An early-ish start and a short stretch of queuing later, and we got lucky in the car-park lottery when we were put right next to one of the pedestrian gates and then got the campsite we wanted by about 10:30.  Everyone else gradually arrived, and then we did the inevitable --- we went to the cider bus. 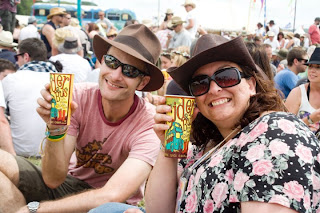 Cider bus! - photo via Di
Of course, we've been to the festival a few times now, and we're getting quite good at the whole middle-class thing..... I've taken freshly made mojitos for a few years now, but this was the first year that we took a stove top espresso pot so that we could have proper coffee at the tent every morning.  Perhaps we're just getting old and too used to our creature comforts, but it was great.  Food, as ever at this festival, was superb.  I only managed the three pies and didn't get over to Pieminister, but still ate my fill with organic goodness served in compostable containers.  Mmmm.  No brown van catering for me here. 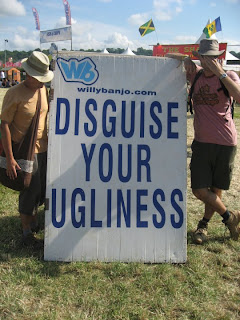 picture via Sarah
They also had a shop called "Hats for Bald Headed Bastards".
I was very static during the 2009 Festival, spending much of the time sat in a chair in front of the Pyramid Stage.  This year I was determined to see more, and I more or less succeeded - I wandered around the Green Fields, The Common, Avalon, Arcadia, West Holts, Cabaret, the Park and other areas of the site that I hardly ever get to.  I also saw acts performing at lots of the smaller stages.  The trouble is that there's so much to see... never mind all the bands, you can also see stuff like the Space Cowboy swallowing swords in the Cabaret tent or the crazy wall of death in the Common.  You can drink Tuborg or Cider at any of the bars, but you can now also get a strawberry mojito made with ice, fresh mint and Havana Club Especial at several places too, as well as organic English strawberry wine from the Green Fields at 10am... which we did, of course. 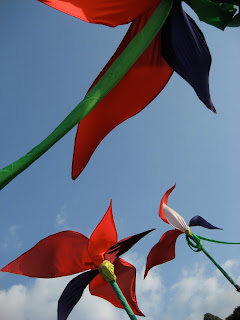 The bands were good too.  In no particular order, I especially enjoyed the sets by Rolf Harris, The Stranglers, The National, The Hold Steady, Ash, Gorillaz (in spite of what some of the reviewers said - they produced Lou Reed, FFS.... ), Muse, Hot Chip, Billy Bragg, Toots and the Maytals, Dizraeli and the Small Gods, Ray Davies, Slash and the Bees.  I missed loads too: Laura Marling, Thom Yorke and Jonny Greenwood, Mumford and Sons, Pet Shop Boys, Faithless, the XX, Keane, Stevie Wonder, the Wurzels.... but you can't see everything, can you? 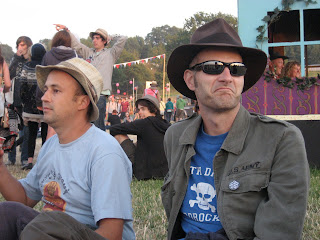 Unimpressed.
I also saw the Courteeners.  Hmmm.  I like their new album a lot (which, if you've heard their first album, came from nowhere).... but really this is cat/mat/sat rhymes bellowed out to an undiscerning audience of bereft Oasis fans.  See also The Cribs. 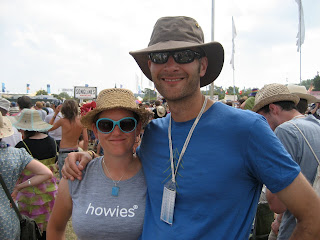 A rare sight.  We spend much of the festival apart. She likes to salsa, I like The National.
We camped with the usual shower (is there a less apt word to use in relation to the Glastonbury Festival?  The Greenpeace showers were largely broken this year, so I went 5 days without.  5 hot, sweaty days.  Mmmm.).... we also welcomed Andrea and Linda into our happy little gang.  I also met up with a number of friends in various states of refreshment over the weekend: Del, Alex, Dom, Stef and Dave at the Cider Bus and Rebekah and Graham at the Pyramid.  Hopefully we'll have yet more friends at next year's festival, eh Jen? 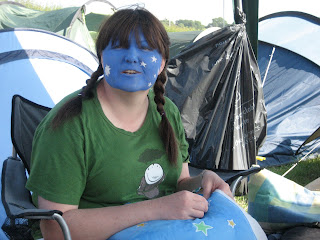 don't ask.  She didn't even watch the Australia v Serbia game.... busy saving Pandora, or something
There was the football to consider too, of course.  I did go down to the Pyramid with about 40,000 other people to watch the England v Slovenia game, but I decided not to bother watching the game against Germany... not least because Slash and then Ray Davies would be playing, but also because I have only ever seen about three England games in my whole life that I have actually enjoyed, and having seen this England side play, I didn't have much hope that this game would be worth watching either.  I'm not smug about the result, by any means, but I did get to watch Slash playing "Sweet Child Of Mine", "Paradise City", "Night Train" and "Rocket Queen" and Ray Davies working his way through the Kinks songbook as England fell to pieces.... so.... 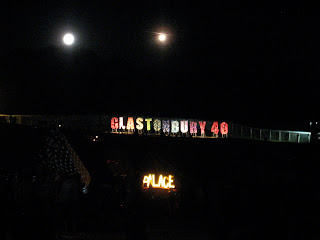 Ah, what else do you need to know.  It was great.  It always is.  Michael Eavis is right.  This year, I even picked up a tan. 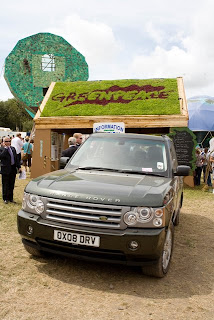 photo via Di
Oh, one thing to add.  The sight of a massive Range Rover parked in front of the Greenpeace area really tickled me.  Gotta love those green credentials, eh? Actually, it's Prince Charles' security guards casing the joint for HRH's visit to the festival, but what a photo.... that massive car has leather seats and everything and must do about 3mpg.  Greenpeace must have been delighted.  Sadly, they probably were when Charlie turned up and they had a green love in before he was ferried to his helicopter in a massive gas-guzzler......

...and whilst I'm moaning, what is it with all the rubbish?  The organisers go to great lengths to encourage people to recycle and to take their rubbish home with them; they have the slogan "Love the Farm, Leave No Trace" and they hand out black bags for rubbish and green bags for recycling so that you can keep your campsites clean.... and yet every Monday brings about the heartbreaking sight of thousands of abandoned tents, trolleys, bags, gazebos and a bombsite of empty cans, food trays, used baby wipes and the like.  It's disgusting.  People are happy enough to bring mirrors and portable showers and to shave their legs at the festival, but they're not prepared to put the effort in to help keep the place tidy.  Oooh, it makes me cross.  Grrr.

Apart from that, it's a brilliant festival, and I've already booked my room in that rock and roll Travelodge for 2011.

Email ThisBlogThis!Share to TwitterShare to FacebookShare to Pinterest
Labels: glasto 2010