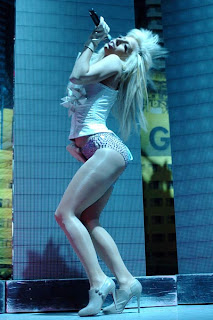 As my giglist will attest, I don't go to many 'pop' concerts.  Golden circles, hysterically screaming fans and sets featuring multiple changes of costume don't really come very high up on the agenda at your average Iron Maiden gig..... and yet here I am at a show where the star changes her outfit more times in the space of two hours than Bruce Dickinson has done throughout his whole career.  So what happened?

I've got a button badge that says something like "I'm into bands that don't even exist yet", and yet in spite of this indie snobbery, Lady Gaga remains something of a guilty pleasure of mine.

I've tried to intellectually rationalise this.  Oh, how I've tried.....

"Perhaps I'm overthinking it, but I do wonder if Lady Gaga is somehow wasted on music fans. As she writhes and gyrates onstage in a succession of increasingly outlandish and seemingly impractical costumes before a backdrop of silent movies, it's hard to escape the conclusion that she's casting pearls before swine. She's clearly an avant-garde performance artist, so what the hell is she doing wasting her time in front of these hordes of screaming teenagers? Take the video for this song: it's nearly eight minutes long. Given that the song itself is over in 3m28s, that leaves an awful lot of room to spare for a beautifully shot mini film noir featuring a plotting boyfriend, hidden photographers, a plunge from a balcony and then some groovy cripple dancing on crutches. This is art, dangnabbit, and Lady Gaga is an artist. Of all her ubiquitous singles, this is the one that has stayed with me the longest. For starters there's the delicious juxtaposition of this often photographed performer using the paparazzo who must dog her every step as a metaphor for an unrequited love; comparing the obsessive nature of that love with the photographers looking to get that upskirt shot as she gets out of a car. She stops short of saying that the love between camera and star is mutual, but the sadness in her voice as she sings tells its own story. All this and it's absurdly catchy and nigh-on impossible to shift from your brain. 2009 was the year of Gaga and this was her best song. Art has never looked or sounded better.......... yeah, you're right: I'm definitely overthinking it."

Overthinking aside, the fact is that Gaga is in the midst of one of the most stunning runs of brilliant singles ever. Just Dance; Pokerface; Lovegame; Paparazzi; Bad Romance; Telephone; Alejandro..... These are all weapons-grade earworms and have proved all but impossible to shift from the moment I first heard them.

Not only are the songs brilliantly catchy, but their accompanying promo videos have made Gaga into a star.  Forget Madonna and her increasingly embarrassing attempts to surf the zeitgeist, Lady Gaga is setting the trends for others to follow if they dare.  She's the real deal.  I missed her at Glastonbury in 2009, but when the opportunity arose and I was in the country (just), there was no way on earth I was going to pass up the opportunity to see this first date of the rescheduled leg of her Monster Ball tour.  The fact that they were Golden Circle tickets was just a bonus and meant that I could cruise past the crushed hordes of people who had been queuing since the morning and take a position in front of them more-or-less at my leisure. 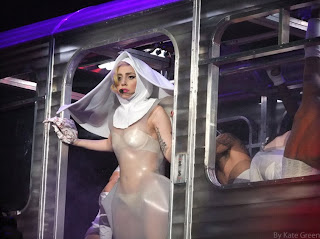 As you often get at Arena gigs, this was quite a mixed crowd, with ages ranging from the very young (about seven) to the comfortably middle-aged (erm, even older than me).

There's a bit in Caitlin Moran's brilliant interview with Gaga in the Times where Gaga talks about the audience she performs for:

"I have just come up with the theory that, if you have one of your heroes lying tipsily next to you, you should tell them all the pretentious pop-culture theories you have come up with about them. So I slurringly tell her that the difference between her and, say, Madonna, is that you don’t penetrate Gaga. Her songs and videos are – while sexual – about dysfunction and neuroses and alienation and self-discovery. They’re not, in any sense, a come-on. Despite having worn very little clothing for most of her career, Gaga is not a prick tease.
“Yeah! It’s not what straight men masturbate over when they’re at home watching pornography,” she confirms. “It’s not for them. It’s for… us.” And she gestures around the club."

The "...us" she's referring to are very much in evidence in the crowd tonight.  There are plenty of people here dressed up for their night out, but lots of other people have gone the extra mile for their heroine, whether they are guys dressed like the Future Sailors from the Mighty Boosh, people wearing fluorescent "Just Dance" t-shirts, with diet coke cans curled into their quiffs, or girls in towering stilettos and masks... something about Gaga has encouraged them all to make a bold, personal statement.  Gaga touches on this in her set when she tells her "Little Monsters" that they can be the person that they want to be, and that they don't have to give a damn what anyone else thinks or says.

The set itself is quite a spectacle, with large neon signs, a full band including two guitarists and lots of heavily-muscled male and female dancers.  Gaga herself first appears silhouetted against a white screen before making her way down a staircase to the front of the stage.  For the first, but not for the last time during the set, I wonder if she's actually singing or if she's miming along to a tape..... not that it really matters, as she's rapturously received by her adoring crowd who scream regardless.  We're underway, and what follows is some two hours of thumping, muscular, slightly samey-sounding, pneumatic synthesiser music.  Gaga works her socks off with her dancers, supported by her old flatmate and gay best friend, who is centrestage throughout.  She might be supported by a taped vocal, but her microphone is very definitely on when she tells us that she's pleased to be back in the country: "You have some pretty big cock here in the UK so DANCE YOU MOTHERFUCKERS!"

It's all very entertaining, but two things slightly sour the night for me: the first is that, when compared to the majesty of the singles, much of Gaga's material sounds a bit thin.  I suppose the sheer quality of those singles makes some sort of drop-off in quality inevitable, but the simple fact remains that Gaga's other songs sound like filler, in a way that I don't think they do on the album.  This fluctuating quality is compounded by the sheer amount of time that the audience spends looking at an empty stage, either because the set is being shifted or because Gaga is changing into another costume.  I realise that the costume-changes are all part of the theatre, but it does drag a good 60 minute set out over two hours.  It's not exactly boring, and we get the discostick, the firework firing bra and knicker set and all that, but neither has much effort has been made for the audience to do anything during those breaks but wait for the show to recommence.  The set itself is interesting, but ultimately I don't think it's a spectacular as I was expecting.  It looks good, but for all the pauses, it doesn't fundamentally change all that much (although hats off for the giant angler fish that attacks Gaga during Paparazzi....).  It's okay, but it's not amazing.

We finish, of course, with "Bad Romance", and we leave the arena with Gaga's protestations that no one will love their fans as much as she does ringing in our ears.  Alright, so from a purely musical point of view this might have left a little to be desired..... long pauses, filler and the possible use of taped vocals.... but for once, none of that seems to be all that important.  This was an event almost as much as it was a gig, and I'm buzzing to have seen Gaga at work and grateful to Mike and LB for the opportunity.