spread my wings and fly away....

Another day, another long drive through the Namibian desert.... it's time for a change of pace though.  Instead of spending another night in our tents, we're staying a couple of nights in actual buildings with beds and bathrooms, and have the opportunity to sign up for a few activities: quad biking, horse riding, sand boarding.... that kind of thing.

I choose to skydive, and am quickly joined by C, who decides that she couldn't bear it if I came back and raved about how good it had been.  Not a great reason to jump out of an aeroplane, perhaps, but she was determined not to miss out. I'm not really an adrenaline junkie, and the idea of bungee jumping leaves me completely cold, but for some reason I've had a vague hankering to skydive for some time.  I had plenty of opportunities to give it a go in Australia and New Zealand, but the timing never quite seemed right.  Here, as we were driving into Swakopmund, I detected the butterflies in my stomach that were the sure sign that I was going to go ahead even before I had consciously decided to do it.

We were scheduled to jump that afternoon, immediately after lunch.... but to be honest, once I'd made up my mind, I wanted to jump immediately.  We were taken out to the airfield in the middle of the desert and then had to hang around for an hour or so, getting steadily more nervous.  Two other members of our group were jumping too, and they went up in the little Cesna before us and we got to watch them jumping out of the plane, freefalling for what seemed like an age and then drifting back down to the airfield on their parachutes.  Both of them acquired nicknames that afternoon: Nadina became "Bullitt" for being so damn cool about the whole thing.  Her other half John, on the other hand, looked as pale as a ghost as he stepped onto the plane, and we were able to hear him screaming from at least 5,000 feet, so he became "Screamer".  Beautifully, as his feet touched the ground, the very first thing that he said was that he needed a hug.  Lovely couple, and both were completely elated by the whole experience, which was encouraging, but we didn't really have too much time to celebrate with them as we were up next.

It takes about 25 minutes to get up to 10,000 feet, and so we had the added bonus of a scenic flight above the desert where the big dunes meet the Atlantic Ocean.  I hadn't thought I would enjoy it all that much and would be totally preoccupied with the jump, but actually, I calmed down almost as soon as we got onto the plane and took off.  No going back now, eh?

I think you can see from my face that I look a little pale as we edge out of the plane door, and for the first two or three seconds I'm clearly trying to work out how I feel about the whole thing, and then I just relax into the moment.  It was awesome.  The door opens and you hang your legs out of the plane, feeling the wind immediately start to pull you out.   Then it's a case of head back and tip out.  It doesn't even really feel like you're falling, and you don't get that dreadful plummeting feeling in your stomach.  As you get your bearings, you can really look around at the Google Earth like vista below you.  When the parachute opened after about 30 seconds of freefall, I was actually a bit disappointed that it was all over.... and who ever thought I might think that.   The parachute ride down takes another six or seven minutes, and you have plenty of time to look about you and to start to process the experience.

It was brilliant and I'd do it again tomorrow.  I think C. enjoyed herself too, although I'm sure she didn't really mean it when she turned to her instructor after her feet touched the ground and said: "Don't tell my husband, but that was the best few seconds of my life".  I mean, it was good, but come on!

After that we were on an adrenaline high and it was time to party. 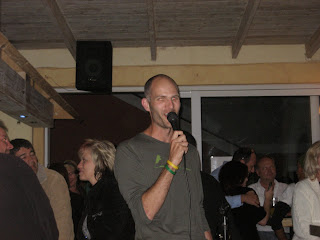 Unfortunately, the band for the evening had cancelled, so the restaurant was forced to dig out some karaoke.  Nevermind, I was in such a good mood that I even wheeled out my party piece and channeled my spirit guide Johnny Cash with a barnstorming rendtion of "Ring of Fire".  I was expecting a rousing reception from our raucous little group (all of whom had been drinking for some time), but I hadn't quite expected to look up to see that all of the staff in the restaurant had come out from the kitchen to see what was going on.  It was great. 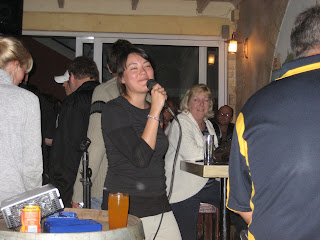 Gums quickly joined in the fun, having a stab at Toto's "Africa" (naturally).  And then it was off to do some dancing. 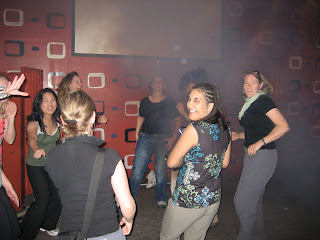 .... Those of you who know her will not be at all surprised to learn that this is where C. quickly acquired the nickname "Disco" and where I retreated to the bar to watch a rerun of the rugby.

It was a good night.

We were in Swakopmund the following day too, and went back out to the big dunes to do a bit of Sandboarding.  It is possible to do this on a stand-up snowboard, but as a die-hard skiier, I chose the other option: sliding down on a piece of plywood. 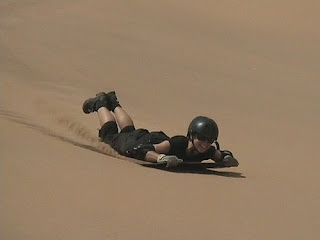 We were clocked at speeds of over 70 km/h, so this is actually quite hair-raising... although as I was hesitating at the top of one of the slopes, I was reminded that I'd jumped out of a plane the day before, so it seemed daft not to just go for it.

It was fun, although I think I'm still finding pieces of sand where no sand should be.

That was it for me, and I spent my afternoon dozing and watching the Super XIV rugby in a bar, but C. had the energy to go horseriding out in the desert.  She stayed on her horse, unlike Gums, who managed to get thrown off her mount.  Twice.  Whether that was a case of Gums having a troublesome horse, or the horse having a bothersome Gums, I couldn't possibly comment...... 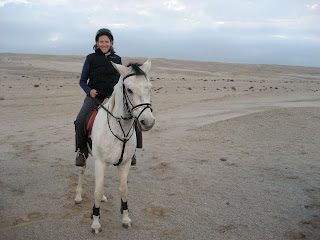 Swakopmund is a growing town and not just because of all of the activities it offers to tourists.  They've discovered uranium in the desert around here, and so there are now a number of mining operations either digging it out or actively tearing up the desert looking for more.  You can't expect the Namibians to overlook a resource like that, but there seems to be a very real danger that a precious and fragile environment is going to quickly be destroyed in the pursuit of short-term gain.  Shame.

I wouldn't say that Swakopmund was a beautiful town, even though it marks the place where the desert meets the ocean, but it will live long in my memory as the place where I jumped out a plane.  It really doesn't get much better than that.