dream beneath the desert sky....

Another early start and a long day as we leave South Africa and enter Namibia.  I'll admit to being slightly anxious about crossing land borders in Africa, particularly as I'm carrying syringes and needles and things, but actually there was nothing to worry about at all.  In fact, the Namibian border guys seem to like the English, and ask us what our national anthem is.  After a quick burst, they wonder why we're only asking to save the Queen and none of the rest of the royal family.  A reasonable question, although a better one might be why we bother asking to save any of them..... I ask them what their national anthem is, and they proudly tell me that it's called something like "Land of the Brave", which I tell them is a far more inspiring title than our dirge.  After all the damage we've done in Africa and in other countries across the world, it's a wonder that the British are welcome anywhere.  Namibia was in fact a German colony for a long time before being taken over after the First World War by British controlled South Africa.  The legacy of this German occupation can be seen all over the place, but perhaps the best thing about it is that much of their beer --- certainly Windhoek --- is brewed according to the Reinheitsgebot purity laws of 1516 and is thus delicious.

Beer aside, this is a stunning country.  We leave the sealed roads of South Africa behind us as soon as we cross the border and we begin to drive on dirt roads.  Actually, these are a lot better than they sound and are actually pretty smooth, even if we're now travelling slower.  As you've probably gathered, we spend a lot of time in the truck on this trip, as we have an enormous amount of mileage to get through, but the truth is that this doesn't bother me in the slightest when we have such stunning scenery to look at.  We're now driving through one of the oldest landscapes in the world.  It looks a little like the red centre in Australia, only the rock formations are older and more weathered and are shattered into piles of boulders.  It's a stunning landscape of craggy outcroppings, long mountain ranges and flat, boulder covered plains. 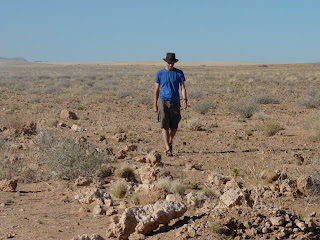 Our destination for today is the Fish River Canyon.  It's the largest canyon in Africa and apparently the second largest in the world (after the Grand Canyon - the biggest would have to be in the USA, right?).  It is, of course, astonishing. 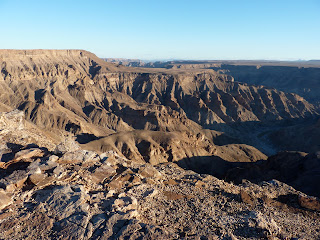 Here comes the science bit, so pay attention at the back.

The canyon is approximately 161 km long, 27km wide at its widest point and 550m deep. It is the oldest canyon in the world, formed approximately 500 million years ago, with some rocks at the bottom dating up to 2600 million years old. The canyon was formed in part by glacial movements (upper section), movement of tectonic plates, and erosion. Four wet periods, or pluvial periods, have occurred in the south-western part of Africa during the last million years, resulting in a large run-off of water, which sped erosion.  The plateaus are 220m from the base of the canyon. Catfish can be found in the Fish River below, and they are known to survive the dry season by burrowing into the mud until the water returns. It’s a very slow moving and shallow river – more like a stream. Water levels are normally highest during February until April. The highest recorded temperature at the bottom of the canyon was 58 C. So there you go.  It's big and impressive and we watch the sun setting behind it. 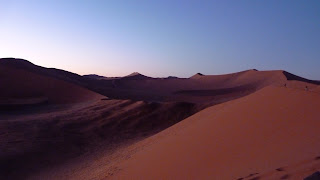 After the canyon and night gawping at the Milky Way and the Southern Cross in the amazingly clear skies, we carry on into the Namibian desert, heading on north on crappy roads towards the famous red dunes.  It's late afternoon before we arrive where the towering red sand dunes of Sossusvlei form the gateway into the Namib Desert itself.  The landscape is stunning, so naturally I spend some of my afternoon swimming in an alarmingly green swimming pool in an attempt to cool down.  It is notable that Bones, the Doctor in the party, declines to enter the water.... ah, I'm sure it's fine, and I'll swim in worse before returning to the UK, that's for sure.  Just don't tell my dad.  Or the practice nurse who made me promise I wouldn't go swimming in Africa..... 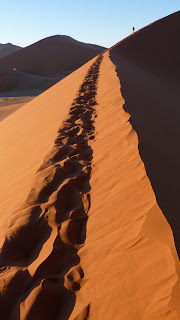 A shockingly early start the next morning sees us climbing up some 300m onto Dune 45 to watch the sun rising.  I like to think of myself as reasonably fit, but I'm wheezing and coughing by the time we reach the summit, and every footstep into the slippery, shifting sands is a real effort.  The sunrise makes the effort totally worth it, of course, although it's hard to shake off the somewhat unfortunate idea that this landscape looks like a Windows XP screensaver. 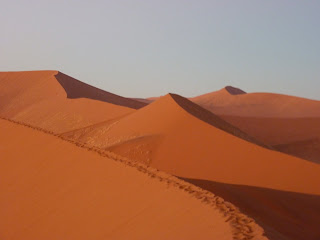 After a tasty breakfast at the foot of the dune, we visit Sossusvlei - a clay pan, enclosed by the world’s largest sand dunes and Sesriem Canyon. We take a guided walk, led somewhat bizarrely by Yuri, a tiny Japanese woman who came here 13 years ago and never left.  She's great, a real bundle of energy bounding up and down the dunes, but she has the crazy idea that someone my height could never survive in this environment, and that if I stayed I'd be dead.  Fine.  But why then is she bragging that she's been growing ever since she moved here?  Pah.

It's pretty dry around here, and more water is received via fogs than through precipitation.  Many of the animals, like Oryx and Springbok, have learned to function by extracting the moisture they need from the food they eat and without much need to actually drink water at all.  It's an incredibly harsh looking environment, and yet somehow it teems with life.

It does rain here occasionally, and we walk along the dried-up river bed.  Hard though it is to believe, there used to be lakes here too, and their remains can still be seen amongst the dunes, with the remains of 1000 year old trees frozen where they stood when the last of the water dried up.  It's so dry around here that these relics are unable to even decay. 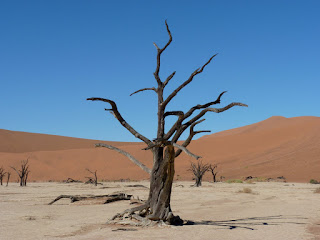 It's a remarkable place.

Back at the campsite, we take the opportunity to take a "20 minute walk" to a nearby canyon.... only Elbie's 20 minutes turn out to be at least an hour by anyone else's calculations, and we end up spending about 3 minutes at the (quite nice) canyon before being forced to hitch a lift back to avoid being plunged into darkness by the rapidly disappearing sun.  At every stop, we're warned of the dangers in any particular campsite, be that scorpions, black backed jackal, snakes, lion or whatever.  Here we were warned about hyena and told the horrifying story of how one guide woke up to find themselves being dragged across the campsite by her cheekbone.... needless to say, none of us fancy a walk in the dark.  We make it back okay, thanks to the timely ride, but when asked if we fancy sleeping outside our tents, politely decline.  Barry, our pipe-smoking driver, has already acquired the nickname "Chuck Norris' by his refusal to wear shoes under any circumstances, but his hardness is surely beyond dispute when he scorns the danger of mere hyena and continues to sleep under the truck.  What a guy.

Perhaps Barry does not sleep at all.... he waits.
Posted by swisslet at 19:19