please allow me to introduce myself....

After such a wonderful trip, it's really hard to know where to start.  Almost nothing I write can do any kind of justice to the amazing few weeks I've just been lucky enough to experience.  There's so much to talk about and so many photos to show that I'm going to break this up into manageable chunks and hope it all makes sense by the time we get to the end.

I've wanted to go on a safari for almost as long as I can remember, but booking this trip, I wasn't exactly sure what to expect and I didn't want to set my hopes too high.  There was an awful lot of mileage for starters, as we hauled our way some 5,250km up through Southern Africa in a mere 21 days, and I was slightly anxious that this wasn't a classic safari tour around game parks, and that I might therefore not see everything I'd hoped.  There were the people too: the GAP website says that the overland truck has a capacity of 22 people and that the average on each tour is 14.  What were they going to be like?  I was pretty sure that the tag "participative camping" would put off a lot of older people, but were we about to get trapped on a bus with a bunch of 18 year olds finding themselves before university?   We booked the tour pretty quickly as we were putting our itinerary for our time off work together, and as I had to worry about our more immediate trip to Australia and New Zealand, I put this one to the back of my mind.  By the time we were back in April, I barely had a week to get my head around what we were about to do and then we were off to South Africa. 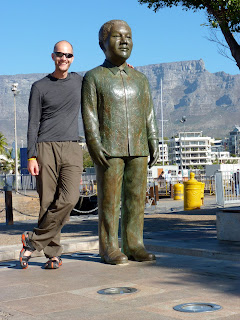 You hear an awful lot about crime in South Africa, and I'm afraid to say that I was a little anxious when we touched down in Cape Town and contemplated what to do with our day before our tour briefing in the hotel that evening.  Our cab into the city was brilliantly playing Mariah Carey's "All I Want For Christmas is You" and the weather was gorgeous, so we quickly decided that hiding in our hotel room all day would be ridiculous, and arranged to get a taxi up to Table Mountain.  Apparently the view from up here is often obscured by mist, but today it was crystal clear and we were able to get an unimpeded view across the Cape and out towards Robben Island.  From there we cabbed out to the Victoria and Alfred Docks and soaked up the atmosphere on a beautiful afternoon (even if I did have to try quite hard to ignore some of the football shirted Englishmen in the bars). 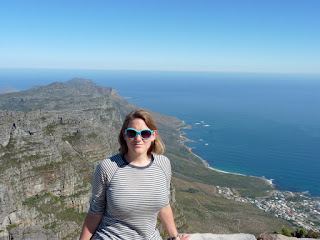 The briefing itself was our first opportunity to see who we would be travelling with, but as you might expect, our brief introductions went in one ear and out of the other as I tried to fill out a disclaimer form and to take in some of the information I was being given by our tour leader.  We seemed to be quite a mixed bunch, made up of lots of Canadians, a few Germans, a Belgian, a Swiss, an Austrian, an American, an Australian and only two Brits....us.  We toyed with the idea of going out with everyone for a drink, but by the time we'd filled out our forms, everyone had disappeared and a quick wander through the Cape Town streets after dark seemed like an exceptionally bad idea, so we retreated to our room and watched "True Lies" and a bit of "Sense and Sensibility" instead before turning in.  I was still none the wiser about the trip, although by now I'd had a chance to have a look at the truck we would be travelling in... and truck is exactly the right word, as it was essentially a lorry with a passenger bit hooked up onto the back.  Quite how comfortable it was, I was going to find out pretty early the next morning..... 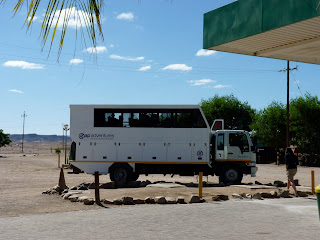 An early start for the long haul up to the border between South Africa and Namibia.  Everyone was still fairly reserved at breakfast, but we were joined on our table by the American who had forgotten the name of her new Australian room-mate and needed our help to find it out without embarrassing herself.... after breakfast it was straight onto the truck, where seating arrangements were slightly awkward because we didn't yet know each other or who was travelling with who, and it was a bit of a bunfight to find somewhere to sit.  After about an hour of driving though, the American -- Jane -- soon felt comfortable enough to tell a Jesus joke, and from that moment onwards, the tone was set and we started to relax around each other.  By the time we arrived at the Orange river, our campsite for the night, we had already started to acquire nicknames for each other.  I'm not entirely sure how it started, I think it was when Elbie, our tour leader, tasked Jane at lunch with learning the names of everyone on the group and then reciting them at dinner the following evening.  Jane, as we had learned at breakfast, was terrible with names, so I innocently suggested that perhaps we should just invent some nicknames....  before I knew where I was, I was almost immediately christened "Iceman".  I'd love to say this was because of my effortless cool, but in point of fact it was because I was on the team with coolbox duty for the day (we were split into teams and had a different job on the duty rota every day) and was in possession of the kitty we had put together to buy ice.  It could have been worse... I was nearly the Ice Truck Killer.  Some names took longer to come than other, but before many days had passed, everyone was blessed (lumbered?) with a name.

Me - Iceman
C - Disco (for her dancing)
Jane - Gums (for her love of any form of candy, particularly wine gums)
Natasha - DJ Tash (after a successful stint on the iPod at the front of the truck)
Thorsten - Sparks (for his fixing of the broken iPod cable)
Ines - Bones (because she's a doctor and because it's a great nickname)
Sandra - Meters (because her prime criterion for a man is that he's 2m tall)
Maxime - Baby Max (because he's 19)
Monica - Grooves (always dancing)
Sina - Dark Horse (because she's surprisingly impish)
Sariah - Her Majesty (for her regal wave)
Jade - Sarge (organisational skills)
John - Screamer (he could be heard from 5000ft on his skydive)
Nadina - Bullitt (because she was so cool on her dive)
Tera - Snappy (grumpy when hungry)
Jess - Swampy (for confessing to not showering)
Lars - Spike (mistaken for an Oryx from a distance)
Dani - Danger (hidden dark side)
Alex - Timon (small and adorable)
Jerome - Waffles (erm... he's Belgian)
Siew - Tigger (bounce, bounce, bounce)
Steve - Silverfox (the senior member of the party)
Elbie - Boss Lady (in charge)
Barry - Chuck Norris (our driver was clearly the hardest man alive)

Most names seemed to come from the self-proclaimed nickname committee (me and Jane), but we tried to be as inclusive as possible and anyone who didn't like their name could apply for a new one.  Nicknames can be a curse, but I think that here they actually helped to bring us together and we actually had people fretting when they didn't yet have a nickname as it made them feel excluded or as though they somehow hadn't left their mark yet 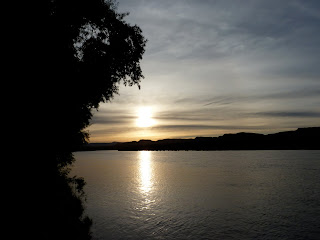 After a long but enjoyable drive, we set up camp next to the Orange River and watched our first glorious African sunset.  A great day, rounded off with steaks cooked on an open fire and beers.

Things were looking good.
Posted by swisslet at 15:32