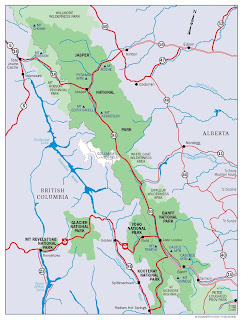 The good news is that I have now finished writing up our trip to Africa (which seems to have taken me nearly as long to do as the trip itself actually lasted....).  I'm sure you've all enjoyed reading my superlative-scattered write up as much as I've enjoyed writing it, but will probably, at the same time, be slightly pleased and relieved to hear that the trip we were thinking of making in August to Kenya, Tanzania and Uganda is now not going to happen.  So, for the time being, there will be no new photos of lions, elephants and giraffe around here.  Please try to contain your disappointment.

The bad news is that there is more travelling still to be done: Glastonbury is up first (another wellies year, I fear), but almost immediately after that, we're flying to Vancouver to spend 4 weeks in the Canadian Rockies before flying out of Calgary.  If all goes well, then hopefully I'll have some pictures of bear and whales and things to bore you with at the end of July.  Shortly after that, instead of going back to Africa, we're heading to Bangkok to spend a few weeks travelling around Thailand, Vietnam and Cambodia.  I've only been to South Korea in that (general) part of the world, so it will be good to see more.  I imagine I will be writing about that trip here too.

I've bought a new hat too... be thankful I'm not writing about that too.

Please try not to hate me.

Once that lot's finished, I'm rather afraid that I'm supposed to be going back to work in September.  I'd love to say I've thought of something better to do with my life, but as of now, I'm afraid that I haven't....at least nothing that will pay, anyway.  I actually popped back into the office this week for the first time since January.  It hasn't changed much, and I can only imagine that it's missed me about as much as I've missed it.....i.e. not at all.  I was only there as C. needed to sign a few bits and pieces, but I still managed to bump into a couple of people I knew and only just made it back in time for the South Africa vs Mexico game that kicked off the World Cup.   I ask you, what's the point of being off work during a World Cup if you then miss it by being voluntarily at the office?  It looks like my brilliant career will resume more or less where we left it.....

Now, before all that, has anyone got any suggestions about what we must do when we're in the Rockies?  We're leaving frighteningly soon and haven't really planned anything beyond arriving in Vancouver....