a city of saints forgetting his name.... 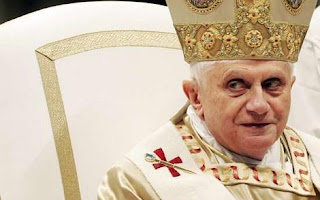 In case you haven't heard (which seems highly unlikely given the saturation coverage it has received in the media), today the Pope landed in Britain for a short tour. His visit has been the cause of some excitement, partly because we haven't had a Pope here for 28 years, but also because -- in the ensuing interval since 1982 when Pope John Paul II was here -- people have started to look at the catholic church with greater scrutiny and are wanting answers on various matters of catholic doctrine and their impact upon the world and upon individuals. Child abuse by Catholic Priests and the ensuing cover-ups. Condoms and the spread of AIDS. The role of women in the church. That kind of stuff.

I won't waste my breath going into detail over the issues or what I think of the Papacy in general and of Ratzinger specifically, but I will say this: if there was such a thing as an Islamic equivalent to the Pope (and there isn't), do you think that we would be so quick to invite him over for an official state visit? Do you reckon the government would be so quick to fork out several million pounds to pay for the visit? Catholics represent something like 8% of the population of Britain (although the numbers are falling), so perhaps you could argue that a visit from the head of their religion is something to be encouraged. But if that's the case, then as Muslims represent something like 4% of the UK population, and that number is rising fast, wouldn't they have a case for a similar visit? It's a moot point, but I have a feeling that a muslim leader would not be welcomed in quite the same way.... by the Government, at least....although I am pretty sure that the humanist protestors that lie in wait for the pope would treat a muslim leader in exactly the same way and would be asking the same difficult questions of them too.

Incidentally, whilst I'm on the subject of religion, of the 2,819 people who died on 11th September 2001 in the World Trade Centre attacks, more than 30 of the victims were innocent Muslims (i.e. not the terrorists). Six of these victims were Muslim women, including one who was 7 months pregnant. Many were stockbrokers or restaurant workers, earning a living to care for their families. There were converts and immigrants, hailing from over a dozen different countries and the U.S. There were heroes: a NYPD cadet and a Marriott hotel worker, who sacrificed their lives attempting to rescue others. The Muslim victims were parents to over 30 children, all of whom were left orphaned without one or both of their parents. I mention this for no other reason than to highlight the starkly obvious fact that white christian Americans were not the only people affected by the attacks, although some people would have you believe otherwise. On that awful day, people from 115 nations and adherents of all kinds of religion died.

Freedom of religion is enshrined in the US Constitution, forming the main thrust of the first amendment from 1791. You will note that it even comes before the right to bear arms that is so beloved of many right-wing Republicans that is the subject of the second amendment. The first amendment states:

"Congress shall make no law respecting an establishment of religion, or prohibiting the free exercise thereof; or abridging the freedom of speech, or of the press; or the right of the people peaceably to assemble, and to petition the Government for a redress of grievances".

(and I'm fairly sure that by "peaceably to assemble", they weren't thinking of crazed pastors in Florida threatening to burn copies of the Qu'ran).

There are something like 7 million muslim citizens in the United States of America. Their numbers are growing so fast that in some places, like in New York's financial district, they are forced to worship outside as the mosques are not big enough to hold them all. ....And yet the planned opening of an Islamic Centre a short-distance away from the site of the World Trade Centre has been the subject of a furious (and sadly predictable) controversy.

I know this is old news, but I've been away, so I've been saving this rant up. Ground Zero could perhaps be considered hallowed ground (and clearly is by some people), but if it is, then it's certainly not just sacred for christians, as people of all faiths had friends and relatives die here and want their memories to be honoured the same as anyone else.

OK, I'm really getting up a head of steam now. Such is my righteous indignation that I'm not going to be able to refrain from further comment on the Pope's visit, I'm afraid. Apologies in advance, but I need to get this off my chest.

Religion provides comfort to billions of people and is mostly benign.  It has, however, probably also been the single biggest man-made cause/excuse for much of the hatred and intolerance and murder in the world since we first crawled out of the primordial sludge. As such, I don't particularly care to hear a 77 year-old Cardinal (president emeritus of the Pontifical Council for Promoting Christian Unity, no less....) saying that "When you land at Heathrow airport, you sometimes think you've landed in a Third World country"  Well, Heathrow perhaps isn't the finest example of British culture and society, but seriously?

I don't know about you, but I'm inclined to think that a democracy like ours where homosexuality is not only legal but where gay relationships can be formalised and celebrated in a civil partnership is a much nicer place to live than a tiny absolutist monarchy populated almost entirely by ageing, celibate male priests but where the age of heterosexual sexual consent is set at 12 (perhaps that explains a lot).  There are lots of things wrong with this country, but we do get some things absolutely right, even though, according to Catholic doctrine, they couldn't be more wrong. 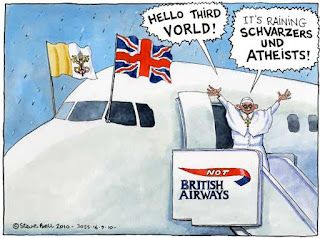 Perhaps this guy would have been better advised to keep his thoughts to himself, but he wasn't content to leave it at that. As he was warming to his theme on the eve of the Pope's visit to the UK, Cardinal Walter Kasper also described England as having a "new and aggressive atheism". The Pope stuck his oar in too, echoing that line by saying on his arrival in Edinburgh that that the UK should resist "the more aggressive forms of secularism".

"As we reflect on the sobering lessons of the atheist extremism of the twentieth century, let us never forget how the exclusion of God, religion and virtue from public life leads ultimately to a truncated vision of man and of society and thus to a reductive vision of the person and his destiny"

Well, as Ratzinger looks down on the rest of us from his lofty high moral ground (conveniently overlooking his own past, perhaps because he is canonically infallible and thus beyond reproach), we should remember that history seems to record only stony silence from the catholic church on the subject of the Holocaust and other atrocities committed during the Second World War.... in fact, the Papacy routinely refused all pleas for help on the grounds that they were neutral and didn't want to get involved. Nice moral leadership there, eh?  Besides, as the author Jon Ronson noted on Twitter, "Stupid Pope. 'Atheist' is very very far down the list of things one can label nazis with". 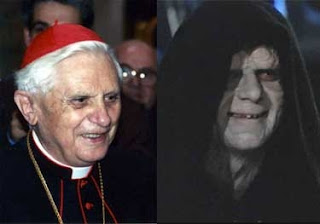 On the subject of Ratzinger's own past, the comedian Mark Steel observed, again on twitter: "Lots of people get more right-wing as they grow older, but this Pope's the only one to do it after starting out in the Hitler Youth" Anyway, I doubt that even the most aggressive atheism or secularism has killed anywhere near as many people, directly or indirectly, or stirred up as much hatred as is still done in the name of religion. And in any case, to imply that a mildly worded letter from the likes of Stephen Fry, Philip Pullman and Richard Dawkins is in any way comparable to the atrocities committed by supposedly godless people like Hitler and Stalin is just absurd.

And don't get me started on the Daily Mail's ridiculous article on the "atheist campaign of hate" apparently being waged against the Pope. Apart from the preposterousness of the article itself, I won't be lectured by the Daily Mail on hate.   Read "quizmaster" Stephen Fry's response instead.

As that letter to the Guardian says, the Pope has a right to visit this country (although lots of people think he should be arrested for the crimes of the organisation he leads), but it sticks in my throat that he comes here partially at the expense of the UK taxpayer and then feels he has the right to stand there and lecture us about our perceived short-comings.