litter on the breeze.... 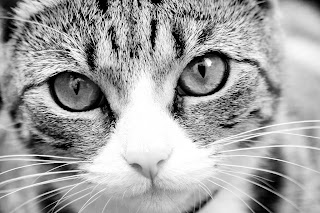 One of the best things about coming home after being away for so long has been the chance to reclaim our cat. Given that she's spent the last 9 months living with my parents and their huge garden that opens out onto fields, I'm not sure that the cat would agree with me, but it's not as though she had any choice in the matter, and we came to claim her as soon as we could after we got back from our last trip to Austria and Switzerland and we took her back home with us.

In spite of her protestations to the contrary, I rather think that my mum is going to miss the cat too. It's funny how quickly these little conceited, self-interested creatures worm their way into your affections. We've travelled to some really amazing places this year, and although it has been brilliant to escape from the mundanity of our normal daily routine, we've both really missed our little cat, sulky madame that she is. My mum actually rang me the day after we took the cat home to ask if she was settling down okay and to tell me how she kept listening out for the sound of the cat's bell in the garden. Having been quietly around for the last few months, there's clearly now a cat-shaped hole in their house.

Once she'd recovered from the car ride north (she's not a great traveller), Minou pretty quickly showed signs that she remembered where she was: she was pawing at her favourite piece of carpet at the top of the stairs, rolling around on her back in the dining room to have her tummy tickled and then staring neurotically out of her catflap. We may not have a huge garden, but we do have one thing that my parents do not: a cat flap. Unfortunately for the cat, this will be remaining shut for the next couple of weeks as we try to re-acclimatise her to living back with us. It's not that I think she doesn't know where she is, it's just that I don't want her compass to get scrambled when she's outside and have her try and look for her OTHER garden and get hopelessly lost.... besides which, she probably hasn't even seen a car in the last 9 months, and it's not as though she was very good with them before that, having something of a tendency to sit in the middle of the road and expect the cars to stop for her. Which, to be fair, they generally did).

This lack of access to the outside was always going to be a problem. Ever since she was a kitten, Minou has shown a healthy desire to want to do her business outside. She hates litter trays and she hates being stuck indoors. When she was very small and was confined to the house, she used to wait until one of us got home from work before she approached her litter to do her business. You can understand this: it smells bad, and who wouldn't want that taken away as soon as possible? It's pretty unpleasant to my human nose, nevermind what it must smell like to the much more sensitive and discerning nose of the average feline. When the day came when we could let her out, I don't think anyone was happier about the situation than the cat. From that day onwards, when the catflap was open for business, there was no problem. With the catflap firmly locked, however, this unfortunately presents a problem for everyone: the cat is stuck indoors and we're stuck with an angry and frustrated cat that probably needs to pee (or worse).

It quickly became apparent that the cat wasn't using her litter. After 12 hours, this tends to arouse suspicion in even the most trusting owner's mind. We had a good look around, but luckily, it didn't look as though she had relieved herself secretly somewhere she shouldn't have. This impression was somewhat reinforced by the fact that the cat seemed to have something of a a look of desperation about her as she stamped about the house complaining. She clearly needed to go. She would sniff around her litter, pawing it occasionally, but she would clearly only go there as a last resort, often turning around to see if she could find somewhere else nearby that wasn't as distasteful. We found ourselves watching her very carefully and trying to follow her as she explored some of the darker corners of the house.

It became a battle of wills, with us knowing that she needed to go, and the cat apparently determined not to go where she was supposed to. After a couple of days of this, with the cat eventually giving up and using her litter, I realised that she was simply being incredibly fastidious and more than a touch neurotic about the whole routine. As the day wore on, she would assume a look of grave dissatisfaction and would hare around the house yowling. Upon gaining my attention, she would lead me to the kitchen, where she would paw and snuffle at her litter before walking away again with a look of great distaste. I would then clean the litter tray and put some fresh litter in, at which point the cat would hop straight on and empty her bowels gratefully before hopping off and pawing at the ground around the litter tray making noises of disgust and running away My job was to now remove the offending articles as quickly as possible before it stank out the whole house (an exercise, by the way cat, that is distasteful to me too). A scatter of fresh litter on the top, and about five minutes later, once the anguish and trauma of the whole process began to subside in her mind, the cat would hop back onto the litter for a pee before running away in disgust and relief. 24 hours later we would go through the whole process again.

It's great to have her back, but do I need to say how much we're all looking forward to the time when we can open the catflap and let her go outside?