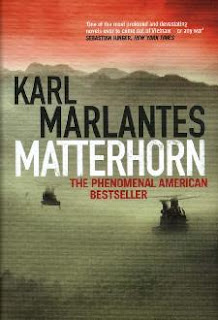 A little before we left for our trip to Thailand, Cambodia and Vietnam, I read a book review in the Observer.  It was an excellent review, and although I couldn't remember the name of the book, it stuck in my head because of the subject matter: it was about the Vietnam war.

Most of us are familiar with the Vietnam War, or at least we think we are. Platoon, The Deer Hunter, Full Metal Jacket, Hamburger Hill, Apocalypse Now... hell, we've all seen so many films about the Vietnam War that we all think we know it inside out.  Spending some time in Vietnam really shifted my perceptions of the war.  For starters, I learned that the Vietnamese, - who fought many wars before they finally gained their independence in 1975 - simply call this conflict"The American War".  It may be a conflict that made an enormous imprint on the American psyche, but to the Vietnamese, it's just one war amongst many as they struggled to be a nation.  The relics of the American War are all around: the GI Helmets that lots of people wear on their scooters, the assorted bunkers and the bits of military hardware you see littered around the landscape.  There are other legacies too, like the deformities that are the long-term result of the spraying of defoliants like Agent Orange by the US during the war.  It's a beautiful country, but it must be hard to visit Vietnam and not be aware of a war that only ended during my lifetime.

When I got home, my interest was piqued and I wanted to learn more.  As well as digging out some of those movies, I remembered that book review and decided I'd give the book a read.  "Matterhorn" is a 600 page novel by Karl Marlantes, a former US marine and a Vietnam veteran. The plot is easily summarised and wikipedia does it as well as anyone:

"The book is set in Vietnam in 1969 and is based on the experiences of Marlantes, who commanded a Marine rifle platoon. The novel presents an unflinching look at the hardships endured by the Marines who waged the war on behalf of America. It concerns the exploits of second lieutenant Waino Mellas and his compatriots in Bravo Company, most of whom are teenagers. "Matterhorn" is the code name for a fire-support base located between Laos and the DMZ. At the beginning of the novel, the Marines control the base, but later they abandon it. The latter portions of the novel detail the struggles of Bravo Company to retake the base, which is now in enemy hands."

You'll know from that not to expect to gain great insight into the Vietnamese perspective on the war from this book.  And you don't.  This is a story told entirely from the perspective of the grunts on the ground.  To them, the North Vietnamese Army are the opposition; they are to be respected as adversaries and perhaps even admired, but if you don't kill them, they will certainly kill you.  The NVA are an ever-present threat, but in lots of ways, they aren't even really the enemy: just as dangerous, perhaps even more so are a host of other things that play a much more prominent hand in the fate or the marines in the book: incompetent staff officers sending them out on impossible missions with inadequate supplies; the tigers that prowl the jungle the troops patrol, looking for an easy meal; the leeches; the simmering tension between white and black troops; ringworm; jungle rot; the mosquitos.... The bigger politics of the war are invisible and irrelevant to the grunts in the bush, and Marlantes doesn't even begin to try and address them.  Instead he focuses relentlessly on what he knows: the life of a 2nd Lieutenant thrown into combat with a platoon of soldiers and the day-by-day struggle to stay alive for a full 13 month tour in an environment where everything seems determined to kill you or get you killed.

That alone probably makes for an interesting read, but what marks this book out for me is that Marlantes apparently has bigger ambitions for his writing.  Our hero, Mellas, is a 21-year old Ivy League graduate with a jumble of confused motives for volunteering for combat service in a war he could easily have ducked.  He is initially ambitious to progress through the ranks, seeing what a good service record, perhaps with a few medals, commendations and press mentions might do for his career back home.   Very quickly though, he is introduced to the madness that is Vietnam, where there seems to be no logic why one man should live and another should die.

So far, so like every other Vietnam novel or film, right?

What is remarkable here is the sheer detail. You know that the author has been here: Marlantes was awarded the Navy Cross, the Bronze Star, two Navy Commendation Medals for valor, two Purple Hearts, and ten air medals during his time in the marines in Vietnam, and his authenticity stands out a mile.  It's relentless:

"The small E-tool burned his blisters and sores. He watched the blood and pus from the jungle rot on his fingers and wrists smear in with the mud and rainwater. He paused occasionally to wipe his hands on his trousers, not even thinking that he had to sleep in them. Everything soon had the same greasy consistency anyway, mixing in with the urine that he couldn't quite cut off because he was so cold, the semen from his last wet dream, the cocoa he'd spilled the day before, the snot he rubbed off, the pus from his skin ulcers, the blood from the popped leaches, and the tears he wiped away so nobody would see that he was homesick."

Reading this book immerses you completely into a world that the movies can only scratch the surface of.  It's incredible; it's harrowing; it's horrifying; it's moving..... you almost feel as though you are in the jungle with them.  When we were in Vietnam, visiting the tunnel complex outside Saigon, we were shown examples of the kinds of traps the NVA and the Viet Cong used to set for the American troops.  They were horrible.  One of our travelling companions told us that their dad had served thirteen months in Vietnam, and although he never so much as saw an enemy soldier, he spent every day of that tour hacking through the jungle in 40 degree heat, scared out of his mind he was about to walk into one of those traps.  Having seen those traps and walked in the jungle in that heat, I could hardly imagine what that must have been like.  Reading this book made me wonder all the more how anybody could stand it, nevermind a bunch of teenagers.

Mellas, our hero, doesn't get any answers and he soon gives up looking for them.  He never gets the satisfaction of knowing that his friends and colleagues are dying for any good reason.  He kills teenage Vietnamese soldiers and watches others dying in agony.  He knows they're not especially evil or even very different from the kids under his command.  At the level of the individual struggle between soldiers, both are killing each other simply to survive, not through any personal enmity.  Life becomes a struggle to survive and almost anything else is meaningless:

"No, the jungle wasn't evil. It was indifferent. So, too, was the world. Evil, then, must be the negation of something man had added to the world. Ultimately, it was caring about something that made the world liable to evil. Caring. And then the caring gets torn asunder. Everybody dies, but not everybody cares. It occurred to Mellas that he could create the possibility of good or evil through caring. He could nullify the indifferent world. But in so doing he opened himself up to the pain of watching it get blown away."

It's a brilliant book.  It won't teach you much you didn't already know about Vietnam itself, or even about the war as a whole, but it is an amazing journey into what it is to fight in a war.  I hope it's the closest I ever get.  It was a book that took 35 years to write, but the results are gripping.
Posted by swisslet at 20:05