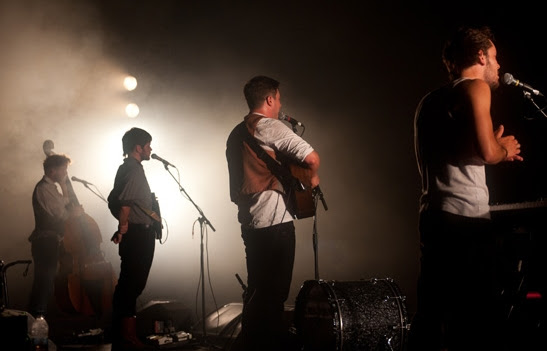 It’s a year to the day since Mumford & Sons released their debut album, “Sigh No More”, but already it’s clear that we’re lucky to be seeing them in a venue as small as Rock City. Perhaps they’re not yet Arena big, but after drawing comfortably the biggest crowd at Bestival, a capacity of a mere 2,100 must seem like relatively small beer to a band on the rise. I was curious about what kind of crowd the band would draw, because the music surely has a wide appeal: they’re cool enough to be featured on Radio One, but harmless enough to also appear on Radio Two... a pretty wide constituency. My first impression was that there seemed to be a lot of girls present, but this was quickly superseded by the realisation that there were also an awful lot of checked shirts in the room, and quite a few flat caps and waistcoats to boot. Mumford fans, it seems, haven’t looked too much beyond the band for their fashion inspirations.

We arrive unusually early, and I therefore get a chance to check out both supports. As you might expect, both are draped in the cloak of the New Folk movement of which the Mumfords and Laura Marling (Marcus Mumford’s other half) are standard bearers. Matthew & The Atlas, indeed, feature both an accordion AND a banjo (I imagine that session banjo players are becoming hard to find at the moment). I have absolutely no idea how steeped the band are in the folk tradition, but I find myself getting increasingly irritated by them and can’t help but think of them as bandwagon jumpers. I don’t mind the folk sound, or even the mannered folk-singing style of the vocalist.... what I object to is the idea that they must draw their lyrical inspiration from the well of folk clichés and thus sound as though they come from the seventeenth century. It’s all mountains, melting snow, “my loves” and lots of references to nature. I don’t mind you sounding like a folk band, but why can’t you seek your lyrical inspiration from the modern world, or at least from universal themes? Marling and the Mumfords both sound folky, but their lyrics are not anywhere near as guilty of dealing in cliché. You could argue, I suppose, that the Fleet Foxes sing of little else but mountains and rivers and the natural world, but I would say that they at least bring soaring harmonies into the equation. Besides, they’re more medieval than they are early-modern sounding.

Johnny Flynn & the Sussex Wit are, if anything, worse. They have a much bigger sound than Matthew & The Atlas, and seem to draw from a much wider musical palate... but as a result, I can’t help but think that the folk stylings have been added as an afterthought because they’re fashionable. Perhaps I’m being unfair, and both supports may have grown up with a deep love of all things folk, but neither of them leave a lasting impression on me.

By the time Mumford & Sons hit the stage, the crowd has reached a fever pitch of excitement and explode at the sight of their heroes, who launch into a version of the relatively restrained album opener, “Sigh No More”. The band sound good, but I find myself looking around at the fervour of the crowd and just not understanding their reaction. There have been a number of bands over the years who I have loved unconditionally, most notably The Smiths. I’m sure everybody is the same, but these are the bands who you feel really speak to your soul and articulate the way that you are feeling. It’s clear from their reaction, that for lots of people at Rock City tonight, Mumford & Sons are that band. I just don’t see it.

Don’t get me wrong though, as they sound great. The album is decent, if not amazing, but it’s clear that in the year since it was released, they’ve become a formidable live band and the songs have grown, sounding much better now than they do on record. They sound fantastic, and the rapport between the band is clear to see. As a band, they’re also at that nice stage of their career where they’ve begun to taste success, but still remember what it was like to have nothing, and therefore to appreciate how surreal it is to be popular. Their overnight success, it seems, has been a long time coming: they’ve played Nottingham six times, they tell us, including gigs at venues like The Maze and Bunkers Hill, as well as the more traditional venues like The Social, The Rescue Rooms and Rock City itself. It's not as though they haven't done the hard yards.  They’re also comfortable enough with each other to have an easy banter with the crowd and with each other, with Winston coming in for particular abuse for his rat’s tail, goatee beard and new tattoo (which he's too shy to show us).

It’s clear from the crowd singalongs (to almost EVERY song) that there are a lot of girls here, but what really strikes me is that the Mumfords appear to be the soundtrack of choice for budding bromances.... and there are clutches of young men hugging each other, pumping their arms in the air, bellowing along as they bounce on the spot. It’s touching. The floor of Rock City – not a sprung floor – is literally bouncing. I’ve been to a lot of gigs in here over the years, but very few have enjoyed a crowd as up for it as this one. The band is good, for sure, but it’s still bizarre that a band like this should inspire such devotion.

The band play the hits “Winter Winds” and “Little Lion Man” early in the set, and the crowd settle down a little once they’re out of the way, but enthusiasm remains high throughout. Momentum drifts a little towards the end as we get a run of quieter songs, but the new songs they play sees the band pick up the mantle of a more traditional rock band with drums, electric guitar and electric bass guitar, and the pace is picked back up again. The new material sounds good, and clearly Mumford and Sons are not just going to disappear, even if they perhaps begin to cast off the “New Folk” mantle that has nurtured them.

It’s a good gig from a band surfing the crest of a wave. I begin by being baffled by the enthusiasm of those around me, but soon enough I’m absorbed in how good the band sound and how much they seem to be enjoying themselves (at one point we get introduced to the tiny toy animals that Marcus bought for each member of the band from the Early Learning Centre). I don’t think they’re the most amazing band I have ever seen and nor do I find their music life-changing or breathtakingly original.... but they are very good. For now, that’s enough (even if I won’t be reaching for a check shirt, waistcoat and neckerchief any time soon....)

My last word simply has to be in praise of the bass player's gurns everytime he approached the microphone to sing his harmonies.  Magnificent.  Truly a sight to behold.  There are folk faces, and there are FOLK FACES.  He was ace.