driving down the highway through the perfect sunny dream.... 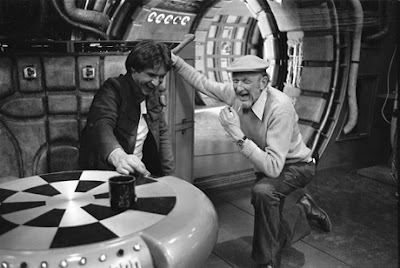 Sad news from the world of cinema today: Irvin Kershner has died aged 87 after a long illness.  He was best known, of course, for directing The Empire Strikes Back...... and it's probably worth remembering that it wasn't by accident that, of all the Star Wars films, that's the one that has by far the best performances from the cast.  Kershner had a background in the theatre and he actively encouraged his leads to improvise their lines.  The results, I think, can be clearly seen on the screen.  George Lucas was (and is) obsessed with the mechanics of his films and the need to bring his "vision" to life, usually focusing on the special effects.  Kershner, I think, understood that he could bring the film to life simply by giving the actors room to breathe.

Star Wars had featured some painfully wooden exposition (as an exasperated Harrison Ford majestically complained to George Lucas at the time, "You can write this shit, George, but you sure can't say it....").  The performances in ESB, in contrast, are much more natural, and all the actors seem a great deal more comfortable with each other and with the dialogue.  The most famous example of this, of course, is when Princess Leia tells Han Solo that she loves him and he replies with the immortal line, "I know".  It's the best line in the whole film (and perhaps in all six films) but it's also perhaps the most human.  Yet, if George Lucas had his way, it would have been cut.  As Kershner himself said in an interview with Vanity Fair:

"There was really only one disagreement [with Lucas]. It was the Carbon Freeze scene when Princess Leia says, “I love you.” Han Solo’s response in the script was, “I love you, too.” I shot the line and it just didn’t seem right for the character of Han Solo. So we worked on the scene on the set. We kept trying different things and couldn’t get the right line. We were into the lunch break and I said to Harrison try it again and just do whatever comes to mind. That is when Harrison said the line, “I know.” After the take, I said to my assistant director, David Tomblin, “It’s a wrap.” David looked at me in disbelief and said something like, “Hold on, we just went to overtime. You’re not happy with that, are you?” And I said, yes, it’s the perfect Han Solo remark, and so we went to lunch. George saw the first cut and said, “Wait a minute, wait a minute. That’s not the line in the script.” I said ““I love you, too’ was not Han Solo.” Han Solo was a rebel. George felt that the audience would laugh. And I said, that’s wonderful, he is probably going to his death for all they know. We sat in the room and he thought about it. He then asked me, “Did you shoot the line in the script?” I said yes. So we agreed that we would do two preview screenings once the film was cut and set to music with the line in and then with the line out. At the first preview in San Francisco, the house broke up after Han Solo said I know. When the film was over, people came up and said that is the most wonderful line and it worked. So George decided not to have the second screening."

Credit to Lucas for sticking with it in the end, I suppose, but his initial instincts give an inkling into why the Lucas directed Star Wars prequels are so clunkingly poor. 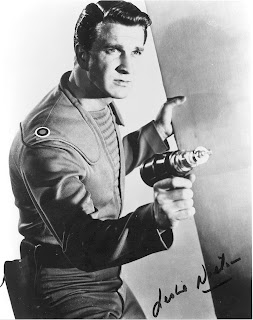 In other sad news from the world of film, it was announced today that Leslie Nielsen has died, aged 84.

He's probably best known by most people as Lt. Frank Drebin from Police Squad! and the Naked Gun films, and as the Doctor in Airplane! ("Yes, and don't call me Shirley"), but he had a long acting career dating back to 1948 (apparently he screen-tested for a leading role in Ben Hur), and it was only really after "Airplane!" in 1980 that he became what Roger Ebert dubbed, "The Olivier of spoofs" .   He could be brilliantly funny, of course, and surely not many peope did deadpan as well, but as time went on, it seemed to me to be a career of diminishing returns.

Perhaps instead of remembering him for "Dracula: Dead and Loving It", we should cast our minds back to 1956 and his role in the legendary science fiction film, "The Forbidden Planet".  Nielsen played it entirely straight in his role as Commander Adams in what was essentially a reworking of Shakespeare's "The Tempest" set in space, but it was an incredibly influential film in the sci-fi genre (catching the eye of Gene Rodenberry, for one) and stands up pretty well, even today.  Better than "2001: A Space Travesty", I'll wager.....

Dr. Rumack: You'd better tell the captain we've got to land as soon as we can. This woman has to be gotten to a hospital.
Elaine: A hospital? What is it?
Dr. Rumack: It's a big building with patients, but that's not important right now.

In very different ways, both contributed to my film education as I was growing up, and the news of their deaths today has prompted me to take a moment to remember them.