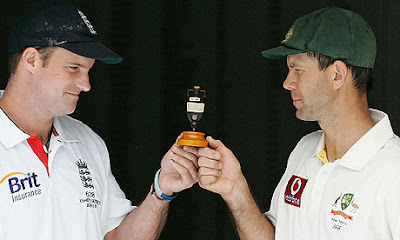 The latest round of one of sport's oldest rivalries begins tonight: at around about midnight, UK time, the first ball will be bowled at the Gabba in the First Test of the 2010/11 Ashes series. For cricket fans, it's an exciting time.... for an English cricket fan especially, these are exciting times. I've grown up watching Australia pounding England in the cricket. The competition dates back to 1862, and before the 1989 series, it was pretty even with 87 tests won by Australia, 66 by England and a further 74 draws. Between 1989 and 2005, there was a prolonged spell of Australian dominance: of the 43 matches played, Australia won 28 to England's 7, with 8 draws. All bar one of those England wins came when the series had already been lost.... With that in mind, the wild celebrations that greeted England's win in 2005 are perhaps understandable - even if we then got hammered 5-0 in the next series to be played in Australia.

England are the current holders of the Ashes, having won the series in England in 2009, and for the first time in a long time, are -- weirdly for a long-time fan of English cricket -- entering the series as favourites... largely because Australian cricket is in an unusual state of disarray and seems to still be finding its feet since the retirement of a whole generation of all-time greats, including Shane Warne, Glenn McGrath, Steve Waugh, Adam Gilchrist and a host of other match-winners.

Before anyone gets too carried away though, here are a few cautionary statistics:

England have lost 10 of their last 11 tests in Australia.

The First Test will be played at the Gabba in Brisbane, and no visiting side has won in Brisbane since Viv Richards' great West Indian side in 1988.

Since Len Hutton's England side did it in1954/5, no side has lost a test in Brisbane and come back to win the series (Hutton went on to win three more tests and the series).

It seems that there is no such thing as a poor Australian side in Australia, and Ricky Ponting, one of the greatest batsmen ever to play the game, will be keen not to become only the third Australian ever to captain 3 losing sides in the Ashes (the last one ended up being embalmed and buried in England). I would stay up, but when I did for the start of the much-anticipated series in 2006, it was only to watch Steve Harmison deliver the first ball directly into the hands of Andrew Flintoff at second slip..... and then watching through my fingers for the next hour as they tore us to pieces. A sign, sadly, of what was to come in the rest of the disastrous series as England were mercilessly annihilated.

Still, until last summer, England hadn't beaten the Australians at Lords since 1934... Warne and McGrath are gone now, and records exist to be broken.