when the loving that you've wasted comes raining from a hapless cloud..... 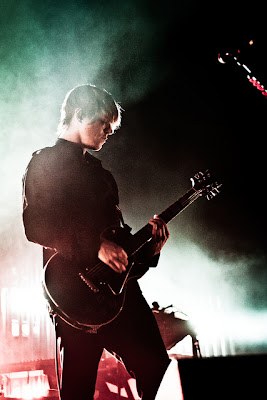 Well, I think it's fair to say that there's quite a contrast between Interpol's crowd and the audience that went to see a-ha at the Arena on Sunday night.  A-ha's crowd was, with the best will in the world, largely filled with ladies of a certain age dressed up to the nines or wearing tour merchandise.  The Interpol crowd, by way of contrast, seemed to be full of hipsters.  You know the sort: dark clothes, big framed glasses and a look of general disdain.  I listen to bands that don't even exist yet.  That kind of thing.  Well, perhaps I'm exaggerating.  But only a little (and they attracted a lot more girls than you might think too).  For once, I was attending a gig on my own.  My wife, bless her, on the drive into town, described Interpol to Hen as follows:

"As The Smiths are to the Beach Boys, Interpol are to The Smiths"

I think she means they're depressing, although when Hen relayed that anecdote to me when I joined them at the pub quiz after the gig, my first reaction was to try to explain how, actually, The Smiths are playful rather than miserable.....but anyway.

I love Interpol, but it seems I'm in a minority amongst my friends.  Ah, to hell with it; I don't need someone to hold my hand at a gig, especially if they're not going to enjoy it.  I occasionally go to the cinema on my own, and that's not really much of a drama either.  In fact, it's something of a guilty pleasure as you can completely lose yourself in what you are watching without needing to worry about anything or anyone else.  So I went on my own.

Rock City used to be a sweat box.  I can remember a Queens of the Stone Age gig when sweat was literally dripping off the ceiling and running down the walls.  At some point after that, they changed the air-conditioning, and suddenly from being a really hot venue, Rock City became positively chilly.  When I arrived last night, it was positively freezing, as the doors at the back were open to allow the crew to lug gear on and off the stage.  I know that, as a band, Interpol have a certain froideur, but this was ridiculous. Still, as it was pretty full, when the doors were finally shut and the band took to the stage, it soon warmed up.

Interpol's debut album, "Turn on the Bright Lights" is a masterpiece, described by Pitchfork as "...wrought with emotional disconnection and faded glory, epic sweep and intimate catharsis... Loss, regret, and a minor key brilliantly permeate jangling guitars and rhythmic and tonal shifts".  Their three subsequent albums, whilst perhaps not touching the same artistic heights, have seen the band grow to become pretty commercially successful, albeit not quite to Kings of Leon levels (I saw the two bands playing Rock City days apart back in 2004.  KoL are now filling stadiums and Interpol are still at Rock City).  Mind you, success can also apparently be measured in the price you can charge for tickets: last night's show were almost as much as the tickets I have bought to see Elbow at the Arena (although, to be honest, given a choice between the two venues, I would rather go to Rock City any day of the week).  They're successful up to a point then, sure, but Interpol still strike me as something of a marmite band - you either love them or you hate them.  The reason?  It's Paul Banks' singing voice.  I once read somewhere that he had a voice that sounded like an undertaker reading from a legal textbook, and I've not been able to shake the image out of my head.   It's utterly unique.  When coupled with a slightly awkward lyrical style (sample lyric: "I promise to commit no acts of violence, Neither physical or otherwise, if things come alive..."), I think it's fair to say that Interpol are not going to be the next U2.

"Among the atrocities found among Interpol’s debut album Turn on the Bright Lights are dumb metaphors, forced rhymes, horrible similes and some of the worst uses of personification you’ll ever witness ...."

I'm usually the kind of guy who pays attention to lyrics, but with Interpol, the clumsy metaphors and horrible similes seem to fit with Paul Banks' undertaker's voice and the chiming guitars.  I like them.  I can't help it.  I'm just drawn to doomy guitar bands.

Every other time I've seen Interpol perform, the band have been wearing dark suits with red ties.  Tonight, Banks takes to the stage wearing jeans, a lumberjack shirt and a beanie.  Also missing is the band's original bassist, Carlos Dengler, and his polished Peter Hook impersonations and pseudo-Nazi uniform stagewear.  The changes don't stop there either: they sound different, too.  It takes me a minute or two to work out what it is, but then it dawns on me: the new bassist -- Dave Pajo -- has a looser, funkier style of playing, quite in contrast to the usually clipped and clinical sound that I was used to and I thought defined the band.  The rest of the band seem to have responded, and the result seems to be, weirdly,  a slightly funky Interpol.  Imagine that.  Actually, it sort of suits them.

Banks isn't a great talker; he exchanges a few pleasantries with the crowd, but basically just concentrates on the music.  He looks like he's enjoying himself, which always helps, and the band sound good, too.  Daniel Kessler is an excellent guitarist, but one of the things I notice as I watch the band is that, as well as singing, Banks actually contributes his fair share of lead guitar.  They are powered along too by Sam Fogarino's crisp drumming style and Pajo's loose-limbed bass.  They play a pretty mixed set, with the new songs like "Summer Well", "Barricade" and "Memory Serves" standing up pretty well alongside classics like "Evil", "Slow Hands", "NYC", "Rest My Chemistry", "Narc" and "PDA".

The new songs sound good, too.... they're touring a decent album.... but for me the set loses pace in the middle.  I wouldn't say that the quality dips particularly, I just think that they lost impetus after they played the 1-2-3-4 punch of "Slow Hands", "Evil", "NYC" and "Barricade".

Still, they finish strongly, ending the set with "PDA"... an awesome song.... and I think that everyone leaves happy.  I know I do.  Good band.  Great venue (thankfully not burnt down)

And I got to the pub before the end of the quiz too.  And we won.

(there's another - somewhat less charitable - review of this gig here.  Worth a read, although I think it's possible to enjoy a gig without jumping up and down, and where I was standing, everyone seemed to be quietly enjoying themselves, singing along to most of the songs)

Those Top 10 Terrible lyrics in full - from the original article by Andrew Unterberger and originally published in Stylus on 22nd October 2004.  The website is now gone, and I've found this on the google cache, so I republish here with love and respect to the original.

10. "I wish I could eat the salt off your lost faded lips" (“Obstacle 1”)
In the first of lyricist Paul Bank’s many stabs at some semblance of romanticism, this is among the worst flops—plus, he should be licking the salt off of said lost faded lips, not eating it. No one eats salt.

8. “She says brief things, her love’s a pony, my love's subliminal" (“Leif Erikson”)
On their own, none of these lyrics would be too terrible—well, of course, except for the pony one—but when combined, they’re a classic Banks dud. “She says brief things”—ok, I guess that could be considered nice. “Her love’s a pony”—uh, I guess everyone likes ponies. “My love’s subliminal”—oh, OK. That explains everything.

7. "This is a contest, this is a bracelet, this isn't no intervention" (“Say Hello to the Angels”)
Well, I must admit I’d be lying if I said I didn’t have my heart set on some sort of intervention, but I guess I’ll settle for the contest and bracelet.

6. “"Well she was my catatonic sex toy love-joy diver" (“Stella Was a Diver and She Was Always Down”)
Halfway through the most incredibly heart-rendering scuba diver love song this side of The Sounds of the Sounds of Science comes this lamentation—a deeply felt ode to Stella, Paul Banks’s “catatonic sex toy love-joy diver”. Now catatonia was never too much of a priority for me in life partners, but maybe Stella was just that good a sex toy.

3. "Her stories are boring and stuff / She’s always calling my bluff” (“Obstacle 1”)
“Obstacle 1” hurts me deeply, because it would be such a great song without lines like this one. Perhaps the most obviously forced rhyme in indie rock history, the use of the “and stuff” filler phrase still stuns just as much today as it did two years ago. If it wasn’t for the fact that the “she’s always calling my bluff” line is kind of cool, this would certainly be the worst line on the album. What were you thinking, man??

2. “My best friend's a butcher, he has sixteen knives / He carries them all over the town at least he tries / Oh look it stopped snowing" (“Roland”)
The first line to “Roland” isn’t so bad I guess—some silly lines about a butcher friend of Banks, who sort of kind of maybe tries to set Roland up as a working class hero figure with that “he carries them all over town / at least he tries” line. But then, for some reason, he gets distracted by the weather and remarks upon how it has stopped snowing. It’s like Banks was in the studio singing “Roland”, and upon reaching the end of the line, glanced out the window and was so stunned by the fact that it had stopped snowing (?), that he had to remark upon it in song, forgetting that the mic was still on. I can just picture the producer later realizing it was still in the song and going to cut it out, but Banks interrupting him, saying “no, leave it. It’s natural.”

1. “"I feel like love is in the kitchen with a culinary eye / I think he's making something special and I'm smart enough to try" (“Obstacle 2”)
Oh man, is this one a monster. Once again Banks tries his hand at romanticism with doomed results, bizarrely personifying love as a chef “with a culinary eye”. This surreal loverman act of Banks’s (“I feel he’s making something special and I’m smart enough to try”—sexy!) makes this line the worst one in a song full of throwaway lines. And what’s more, it appears to have become the sort of precedent for a new batch of romantic atrocities in the form of Interpol’s second album, Antics, with lines like “you make me want to pick up my guitar / and celebrate the myriad ways that I love you”. Well, Mr. Banks, you’ve certainly left us with quite a few here.