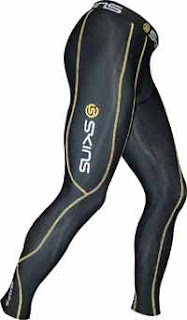 No wait! It's not like that.  They're compression tights, you see, so it's okay.  Right?  That's okay?  Like everyone else, my legs often ache after exercise.  Sometimes they even hurt.  Sometimes, after a long run, they hurt for a couple of days.

My MS affects the way that I feel my muscles, and so not surprisingly it affects the way that I feel the ache in my legs after a run.  It's hard to explain, but as well as feeling the stiffness from a run, I also generally feel a bit more wobbly on my feet after exercise.  It's as though I can't quite feel the ground underneath my feet and have to be a bit careful as I take a step.

Although I knew that compression clothing can apparently help relieve muscle fatigue after exercise, it wasn't until two people mentioned to me within 24 hours that it really seemed to work, that I decided I might have a look.  Both people used compression socks, but as I get a lot of my muscle stiffness in my thighs, I thought I'd opt for tights.

Perhaps this wouldn't have surprised anyone who'd given a moment's thought to the concept of muscle compression, but they're pretty tight.  The size chart suggested I should buy medium, but when I pulled them out of the box in the changing room, they looked minuscule.  Still, nothing ventured.....

They're brilliant.  I wear them for recovery after exercise, and they really do seem to help ward off the fatigue in my muscles, and - most importantly from my point of view - they seem to make me a little surer on my feet in the aftermath of a run.

Well, I say that's the most important thing, but secretly I've also discovered that I actually quite enjoy the feel of a pair of lycra tights underneath my trousers.  It's my little secret and it feels good.

Is that really so wrong?  It's therapeutic, dammit.
Posted by swisslet at 21:23