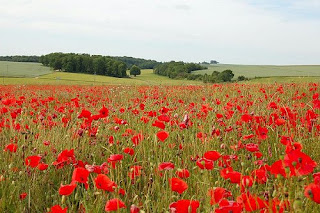 A letter was published in this Saturday's Guardian.  It was sent by some British veterans and it raised some interesting concerns about the Poppy Appeal.  I'll quote it in full:

Remembrance should be marked with the sentiment "Never Again".

I know I write about this every year, but I find Remembrance Sunday very moving.  There's something so dignified about seeing the ever-dwindling crowds of quiet, noble veterans wearing their medals as they lay wreaths to their fallen comrades.  It makes me think about the enormity of the sacrifice that many of these people made all those years ago and how much we owe them.  Of course, when we think about those sacrifices, we generally think about the two World Wars, and especially of the trenches in Flanders during the First World War.  With the death last year of Harry Patch, the last surviving British veteran of the Western Front, it's hardly surprising that the British Legion is trying to update our image of the work that they do to focus on more modern wars.

What appears to have drawn criticism is the way that the British Legion appears to be openly suggesting that we support "Our Brave Boys" in the unpopular wars our soldiers are currently fighting in Iraq and Afghanistan.   As the Guardian reported:

The veterans' letter organiser is Ben Griffin, a London ambulance driver who served nine years in the Parachute Regiment, including in Afghanistan and Iraq, before refusing to return for a further term of service because of his concerns about US military tactics.

He said: "We are concerned that people are trying to take ownership of the poppy for political ends. It is almost as if they are trying to garner support for our boys and any criticism of the wars is a betrayal.

"That is not what the poppy was all about to start with: it was all about remembrance and peace: never again. The government should be supporting these casualties: they are their liability, not the British Legion's."

Does that chime with you?  It certainly does with me, and to hear a veteran like Ben Griffin expressing a concern like that is actually something of a relief.  Without wanting to criticise Help for Heroes themselves, there is a growing sense trailing in their wake that all of our soldiers - volunteers in a professional armed force, lest we forget, not conscripts - are all HEROES, and that any criticism of the wars they are fighting is somehow a betrayal of them and the sacrifices they are making.  Even being seen without a poppy at this time of year is like spitting in the faces of our brave lads (cue the tiresome and predictable criticism of Jon Snow for continuing to refuse to wear a poppy when he reads the news, just as he won't wear any other charitable symbol....).  Nicky Campbell described on Radio Five last week how he was accosted by a member of the public after filming a piece to camera at an outside location and was roundly berated for not wearing poppy..... for a piece that was not going to be aired until April next year.  Snow calls it "Poppy Fascism", which is a deliberately provocative way of putting it, but it's hard to deny that he has a point.  Perhaps, as Guy Winters suggested in the Telegraph, we should put it into the wider context of something we might call "Grief Fascism": as a society, we are becoming insistent that not only must we grieve, but we must be seen to be grieving.

Now, I don't doubt the sacrifices and bravery of our troops in Afghanistan, but to support them should not mean that we are uncritical of the wars they are being asked to fight.  Nor should a lack of support for our wounded be implicit in the absence of a poppy on my lapel (although let's also not forget that the Government should be playing more of a role in the support of our veterans.... it shouldn't be left to charities to look after them and their families.)

As the numbers of surviving veterans from the two World Wars dwindles (and it's 65 years now since the end of the Second World War), it's hardly surprising that the Royal British Legion should seek to draw our attention to the needs of the veterans of more recent conflicts.  As they rush to get The Saturdays to launch the 2010 Poppy Appeal and try to get people to put two minutes of silence to the top of the UK Singles Chart* perhaps they should remember the quiet dignity of those veterans at the Cenotaph each November as they remember their fallen comrades.

*or as they report here: "Oh boy, David Tennant is looking yummy in his suit isn't he?! Yes, yes we know, it's essentially two minutes of not very much noise-wise at all but... it's all in a good cause, and it's very powerful stuff. The fact that David Tennant looked so hot also swayed us into posting the 2 Minute Silence trailer clip. Oh boy, what we wouldn't give for him to be back in the Tardis..."

As an aside, have you seen the TV advert for this year's Poppy Appeal?

Is it just me, or is that a ridiculously lingering cleavage shot on that young widow about 30 seconds in? Presumably it's a bad thing that this is now all I can remember about that advert....?
Posted by swisslet at 19:31

Email ThisBlogThis!Share to TwitterShare to FacebookShare to Pinterest
Labels: news