but baby it's cold outside.... 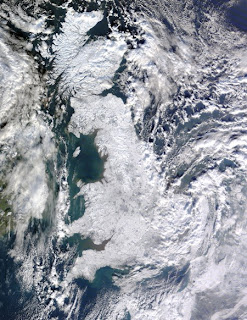 In case it has escaped your attention (or if you are reading this from somewhere outside of the UK), it's freezing cold outside at the moment and it has been for what feels like weeks.  It looks entirely likely that most of the UK will be having an honest-to-goodness white Christmas this year, not one of those ones where the bookies pay out if a single flake of snow lands on the top of the roof of the Met Office (or whatever it is they usually do).

The satellite map above shows it pretty clearly: the entire country is in the grips of a deep freeze.  Indeed, it's one of Britain's coldest winters: Since 1900, only the Decembers in 1950 and 1981 have had such prolonged snowy periods. The trend for the last thirty years, until interrupted by last December's cold snap, has been for warmer, damper winters. These colder winters may well themselves be a statistical blip, but it looks rather like climate change is going to mean that we Brits should expect more winters like this in the future.  And no, please don't insert any Daily Mail-esque grumbles about "global warming" here.  OBVIOUSLY man is having a huge impact on our climate.  To suggest otherwise is to be obtuse beyond the point of stupidity.  The climate is subject to natural fluctuations, of course it is (there was a medieval warm period, for starters), but the scale and pace of change seems to be moving faster and faster.  Let's just hope it's not entirely irreversible.

In all this cold weather, the focus of the media has been on the transport chaos that these freezing temperatures and this snow have caused: we've seen passengers sleeping in Heathrow waiting for their flights to be cleared; we've seen queues of several thousand people trying to get onto Eurostar trains at St. Pancras; we've seen cars abandoned on the sides of snow-swept motorways. Not surprisingly at this time of year, as people seek either to get to, or to get away from, their loved ones, coverage has almosy entirely focused on people inconvenienced by the snow.

As I nearly got stuck in Oxford last week, and C. was stuck in Lyons for 24 hours, I can understand exactly why people are interested in this stuff. Once we both made it home though, I have to admit that my thoughts turned elsewhere: to the people who are not as lucky as I am and do not have a nice warm house with a cosy fire, a lovely wife and a cat purring on their lap (or, more likely, stomping about complaining about the weather and demanding some of my tea).

With that in mind, I've made a donation of £50 to Shelter, the homeless charity. I can't send you all Christmas cards, but I hope that you'll consider this an adequate substitution.

On a completely different subject, at about this time of year, I usually start collecting votes for the Earworms of the Year rundown. To be honest, as I've been away for much of the year, I feel a bit disengaged from the whole thing. How do you feel? If I was to do it again this year, would you cast a vote for your top 5?
Posted by swisslet at 18:23