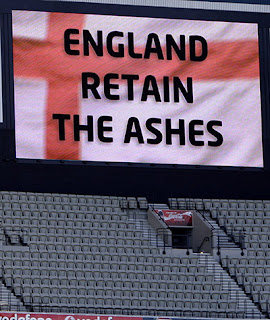 Almost exactly 24 years ago, in December 1986, the England cricket team thrashed a demoralised Australian team at the Melbourne Cricket Ground by an innings and 14 runs.  Powered on by the runs of Chris Broad and the wickets of Ian Botham and Gladstone Small, England retained the Ashes in some style.  Not too shabby for a team who had been derided in the press for being unable to bat, bowl or field.

England finally managed to reclaim the Ashes in a home series -- just about -- in 2005, but thereturn series in Australia saw us battered 5-0.  We again won the little urn back in 2009, but retaining them in Australia was always going to be the real trick.  Australia don't very often lose home series against anybody, and it wasn't for nothing that the bookies had the Aussies as favourites before the series began.

I mention all this by way of context.  When you see the England thrashed Australia at the MCG last night, I think it's important to understand the context of the victory and to see what a huge achievement it really is.

Oh, sure, Australia are not the side that they used to be.  Great players have retired and, not surprisingly, have proved difficult to replace.  Ricky Ponting, the Australian captain, is the last remnant of one of the most dominant sides that cricket has ever seen: for much of the last 20 years, the likes of Mark Taylor, Steve Waugh, Shane Warne, Glenn McGrath, Adam Gilchrist, Matthew Hayden, Justin Langer et al have swept aside all before them.  Now, from that side, only a 36 year-old Ponting remains.

Having not won a live Ashes test on Australian soil since 1986, England have now won two in this series alone and, with one game left to play, there's power to add.  The (admittedly convincing) defeat at Perth aside, this England side have been markedly superior to their Australian counterparts in every single aspect of the game: we have the more potent, more disciplined bowlers; the sharpest fielders; the best spinner; the most obdurate and (Mike Hussey aside) free-scoring batsmen; the better captain and the better tactics.  For an England fan, raised on chaotic and humiliating defeat after defeat, the scale of our victory is almost too good to be true.  We have just won the Melbourne test by the margin of innings and 157 runs.  That's our largest win over the Australians since Jim Laker took 19 wickets in the Old Trafford Test in 1956.  Before this month, Australia had not lost a test match at home by more than an inning in 18 years.  Now they've done it twice in the space of three tests.  Records are tumbling.  Australia may be at a crossroads, but it's at least as much down to how well England have played as how poor a side they have now become.

Although I take no pleasure from seeing one of the great est players in the history of the game laid low - and make no mistake, Ricky Ponting is one of the finest players to ever pick up a bat - I feel no pity for the Australians.  I don't like to see a champion laid low (and Ponting has grown on me enormously since 2005, fronting up to each defeat manfully and making no excuses) but England have been the better side, pure and simple, and they thoroughly deserve to have retained the Ashes.  All the resounding defeats and humiliations of the last twenty years simply make this win taste all the sweeter.  Unlike many of the Aussie fans at the MCG on Boxing Day, unaccustomed to defeat and leaving well before the close of play, I've stayed and watched my team to the bitter end on all too many occasions, so it was great to stay up last night and watch England mop up the last three Australian wickets to win.  As history has shown us, you don't win in Australia very often -- and England have only left with the Ashes four times since the Second World War -- so best to make the most of it whilst we can....

There's one game left to go, in Sydney next week, and England still need to avoid defeat to claim the series win, even if the Ashes are secure. On current form, a 3-1 series victory does not seem out of the question.  As I predicted 2-1 back in November, I'd better go for a draw.

I apologise if you have no interest in cricket, but this win has been an awfully long time coming, and anyway, you may have to wait another 24 years before I bother you with the subject again....