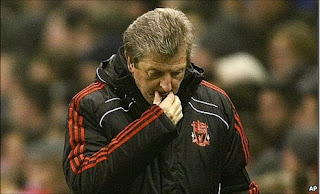 Last night, my football team - Wolverhampton Wanderers - moved from the foot of the Premier League table by beating Liverpool at Anfield for the first time in twenty-seven years.  It's fair to say that Liverpool are hardly the force now that they were the last time we won in front of the Kop, but yesterday's win still represents something of an upset.

The most important thing for Wolves was the three points.  We've been playing some good football this year but have failed to convert that into points.  Our manager, Mick McCarthy, has resolutely refused to make any excuses: it doesn't matter how many of our key players are injured or how unlucky we have been.  The league table does not lie, and after a home defeat against Wigan on Sunday, we were anchored to the bottom of the table and facing a real battle to survive.  The rest, as our no-nonsense manager said the other day, is "shit and caramel".  But we won last night and moved up to nineteenth place and within touching distance of the teams above us.  Mind you, the last time we won at Anfield, we finished bottom of the league, so let's hope that's not any kind of omen (although Liverpool also won the treble that year, and that's clearly not going to happen, so.....). 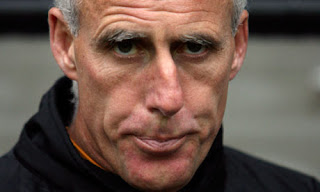 legend
The thing that struck me about last night's result though, and the reason I'm writing about sport here for the second day running, is the reaction of many Liverpool fans to last night's result.  Liverpool have had a difficult season.  In the aftermath of the departure of Rafa Benitez and the change in ownership, results have been poor.  A team with aspirations of a Champions League finish in the top four are currently languishing in 12th position and are far more likely to be sucked down into a relgation dog-fight than they are to fight out it for glory further up the table.

Liverpool are one of those clubs though, aren't they?  Spoiled by decades of success, the fans seem to feel that they have some kind of a divine right to reside in the upper echelons of the league.  Not only that, but they are also expected to win with style.  In spite of the mess left behind by Benitez, the new manager, Roy Hodgson, has struggled to convince fans that he is the right man for the job.  Results haven't helped, but surely the reigning Premier League Manager of the Year, the man who took lowly Fulham to last season's UEFA Cup final, a man with a lifetime of management experience, including two spells with Inter Milan, deserves more than a couple of months to make his mark?  Not if you listened to the Liverpool fans moaning last night.  He's not good enough to be a Liverpool manager, you see.  By the end of the game, fans in the Kop were chanting the name of Kenny Dalglish, apparently thinking that in any way he would do a better job than Hodgson (who, for what it's worth, I think deserves a chance to make his mark, although I don't think the club deserve a manager as decent as him).  I heard a fan on the radio last night saying how a UEFA Cup Final was simply not good enough for Liverpool: they expect more.  That's such unmitigated nonsense.  Apart from anything else, if Liverpool come out of this season having reached "only" the UEFA Cup Final, they'll consider themselves fortunate.  I don't care how glorious your club's history: no one has a divine right to contest European Cup Finals.  You have to earn the right to be there through your results on the pitch.  End of story.

Wolves, you'll notice, barely get a mention in the analysis of the game.  They're almost irrelevant; an inconvenience who were there to be beaten and annoyingly went back to the Black Country with all three points.  As McCarthy said after the game:

"Most people's perception of Wolves would be, 'They are going down, they are bottom of the league and just been beaten at home by Wigan'.  They would think we would come here, sit back, get our arses slapped and our bellies tickled and go home with nothing.  But we decided we were not having that.  We would come here and have a real go, and fortune favoured the brave."

But it's not about how well Wolves played, is it?  It's all about the ongoing soap opera at Liverpool.

Well, as I'm sure Mick McCarthy would tell them, you generally get what you deserve in football, and Liverpool got well beaten by a Wolves team who deserved the points.

Get over yourselves.
Posted by swisslet at 19:07