There's a perfectly logical explanation for this: it's a 100% beaver felt hat that has been handmade by a craftsman in Germany.  The craftsman makes hats for love and in his spare time away from his paying job and his family.  It's a long, slow process that involves many hours of painstaking labour, and each hat is a labour of love. 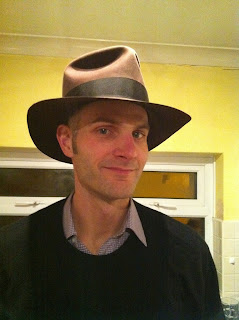 And, to be honest, it looks a lot like my existing fedora: 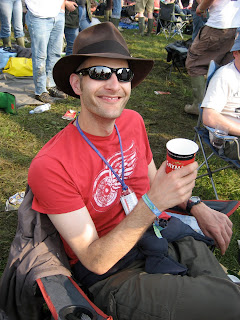 ...but trust me, it feels completely different.  My Akubra is a great hat, but comparatively speaking, it's as stiff as a board.  The new hat - an Adventurebilt Deluxe - is as soft as butter.  It's also darker in colour and quite a lot higher in the crown.  As beaver felt (as opposed to rabbit), it should also be incredibly durable and waterproof, the higher production standards notwithstanding.

It's got a tiny little wrinkle on the brim at the front of the hat, where I think the hat has been clamped as the felt has been sanded down until it is smooth.  It's a tiny little defect, but one that shows that this has been hand rather than factory-made.

Now I just need to wear it and resist the temptation to wrap the hat up in cotton wool when it has been built to withstand a battering.

....you might remember that Cody Bones and I made a little wager about the outcome of the Ryder Cup back in October.  The prize for the winner was a hat.  I won.  Cody, gentleman that he is, sent me two hats.  In return, I promised him that I would post up pictures of the hats.  Well, I've had the hats for a while, so this is probably long overdue. 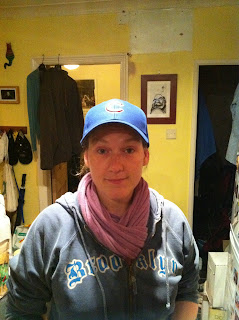 C. modelling a lovely Chicago Cubs hat, seamlessly adding another team of losers to my already extensive list that includes Wolverhampton Wanderers and Northamptonshire County Cricket Club (my rugby team - Northampton Saints - are, to be fair, top of the league at the moment and flying in European competition, so.....) 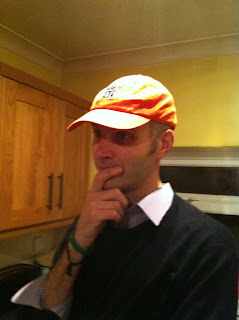 This one's a real beauty: the actual hat that Cody used to wear when he played golf.  All the way from Timberstone, Michigan.

Cody, you are a scholar and a gentleman.  I only hope you like the hats I sent you half as much.

...And later this month, I hope to be able to display an orange trucking hat from a Canadian lumber company.... the gift of a friend from New York who owes me a hat.  It really doesn't get any better than that.

You can never have too many hats, right?  Not with my hairline.
Posted by swisslet at 22:31

Email ThisBlogThis!Share to TwitterShare to FacebookShare to Pinterest
Labels: hat